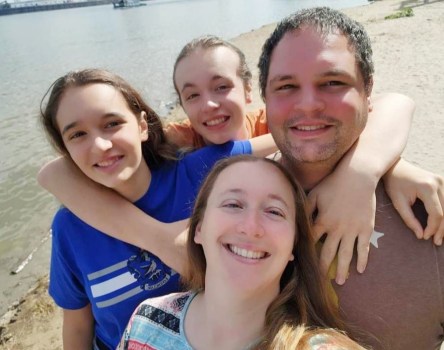 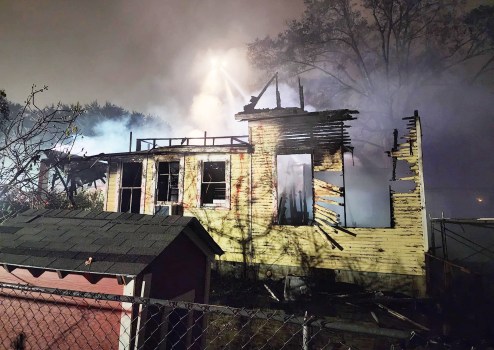 A charred front porch is all that remains of St. John Parish firefighter Stephen Rocquin’s family home in Amite.

LAPLACE — Since joining the St. John the Baptist Parish Fire Department in 2020, Stephen Rocquin has put out countless fires across the community. Now, he and his family are on the opposite end of a devastating situation he’s witnessed so many times before, having recently lost their home and virtually all their belongings to an unrelenting blaze.

“We already made a monetary donation, but we also know that these times are tough and they have lost everything, so we are just trying to do a fundraiser to help bring the community together and other firefighters together to show support for the family,” Paternoster said.

The local union has its own cooking trailer traditionally used for the Andouille Festival. This Friday, it will be used to prepare two 20-gallon pots of pastalaya, enough for approximately 280 plate lunches. As of Monday evening, 160 pre-orders had been placed, and Paternoster said there will be plenty of food available for people to walk up and purchase a plate.

Wesley Mitchell of Sarg’s Mobile Smoke House, Jacob’s Andouille and D&D Sausage have contributed donations to the pastalaya fundraiser. The Rocquins have also found support from area fire departments, churches, their scouting family, and many friends and strangers who have offered gift cards, donations and letters to make the holiday season a little brighter given the circumstances.

The Rocquin family was thankfully out of harm’s way when their home in Amite went up in flames the night of December 3. At the time, Stephen and Nathalie Rocquin were attending a scouting event with their children, 15-year-old Necco and 14-year-old Alia. Most of the troop had already gone to sleep and Nathalie was up talking with some of the adults when she received a frantic call from her neighbor.

“At first I couldn’t get anything out of her, but she was crying, and I knew something was wrong. She eventually said ‘fire’. She was able to tell me that our house was fully engulfed,” Nathalie said.

By the time Stephen and Nathalie left the event in Clinton and headed home, they had received calls from multiple firefighters who described it as one of the hottest fires they had seen in some time. It took roughly four hours to put out, and by the morning, everything aside from the front porch was gone. Fire personnel were unable to identify the source of the fire in the 120-year-old house but suspect it started underneath the property due to how quickly it spread.

The Rocquins searched through the debris and were able to locate some photos, a handful of Christmas ornaments, and part of their son’s rock collection. Everything else was deemed a total loss. They were reunited with their dogs, who had miraculously survived the fire by hunkering inside a concrete dog house in the backyard.

“The most important part is that we are safe. We are really thankful. We are very appreciative of people reaching out to us with all of the love and support,” Nathalie said.

Clothing is a current need for the whole family, but Nathalie said re-establishing a sense of normalcy for the kids is top priority.

“I home educated for 10 years, so we had quite an extensive amount of books. We actually had a library in the back of the house. That’s one thing my daughter is going to miss the most,” Nathalie said. “My son was really into art and creativity and is missing his art supplies, but we’re hanging in there. It’s stressful, but we’re trying to remain positive about it. You can only do as much as you can do.”

Donations can also be directed via Venmo @Stephen-Rocquin.

“We are appreciative for what everyone has done for us through everything we are going through right now,” Stephen said. “We’ve been able to salvage a few personal things out of what remains of our house, and we are doing well with the support of our friends and family, coworkers, and everyone else who has helped us tremendously throughout the whole ordeal.”