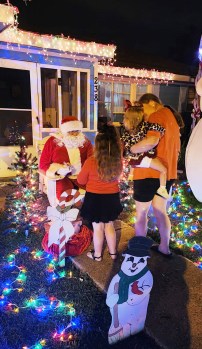 Lance Madere greets local families dressed as Santa Claus as a way of giving back to the community.

Santa Claus, AKA Lance Madere, waves from his beautifully decorated yard on Parker Lane in Reserve.

­RESERVE — Lance Madere comes from a family that was never short on Christmas spirit, and he’s done his part to uphold beloved holiday traditions during the most wonderful time of the year.

Growing up, Madere watched his grandmother set up Christmas decorations on Airline Highway across from Tractor Supply. He often helped his Nanny create an elaborate Christmas display at her home in Garyville, and he hoped to one day capture the same magic in a house of his own. His father dressed as Santa Claus and visited local schools just to put a smile on his kids’ and grandkids’ faces. Years later, Madere would prime wooden Christmas decorations for his father to hand paint.

The painted wood art, Madere’s most treasured pieces in a yard filled to the brim with Christmas décor, now line the pathway leading up to his home on Parker Lane in Reserve. Living on a dead in street meant not many people were able to admire the 22 blow-ups, 17 pieces of wood art and 9,500 LED Christmas lights that transform his property into a winter wonderland each Christmas season — that is, until this past Saturday.

Madere and his fiancé, Deshea Haymann decided to spread Christmas cheer in the Reserve community by inviting families to their front yard to take free pictures with Santa. Madere slid easily into the red suit just as his father did all those years ago, while Haymann passed out treat bags and candy canes to visiting children.

“I’m from the Kenner area, and I don’t know of too many events in the St, John Parish area,” Haymann said. We had about 12 kids come out on Saturday, and it was just good to see. It made us happy, it made the kids happy, and parents were ecstatic that they had something to bring the kids to without having to go to the city. We are going to do it every year.”

Madere had a great time playing Santa. He especially enjoyed quietly asking parents each child’s name so he could see their little eyes light up when they realized Santa knew who they were.

“It was a blast. I’m a goofy man by nature. Three or four years ago I was the Easter bunny at Winn-Dixie in Gramercy, and ever since then I’ve been wanting to dress up as Santa, too,” Madere said. “I thought it would be a good thing to do to spread the Christmas spirit and seeing the little sparkle in the kids’ eyes.”

At a local mother’s request, the duo will be in the yard on Parker Lane in Reserve once again to greet more families from 7 to 8 p.m. this Friday, December 16.