“The Finer Details: USS KIDD Adds Another Piece to the Puzzle” 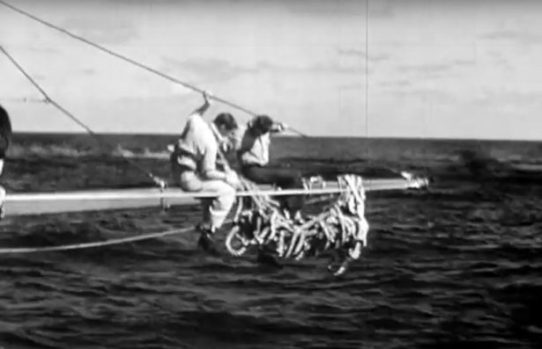 “WWII film footage shows the boat boom of USS KIDD (DD-661) in use during the rescue of downed aviators. The footage can be viewed on the museum’s YouTube channel.” 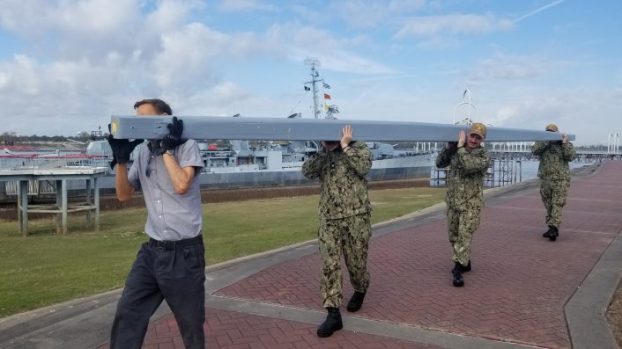 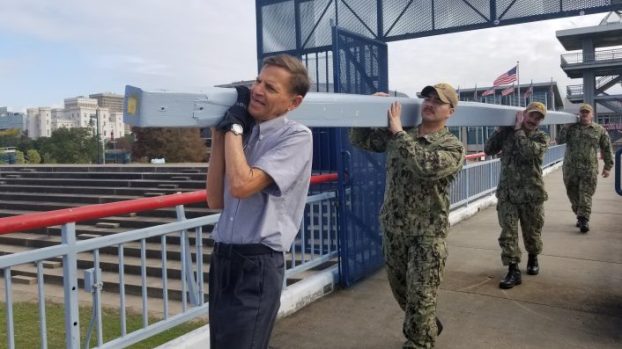 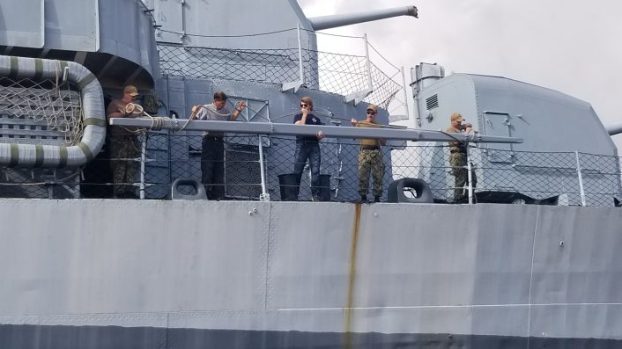 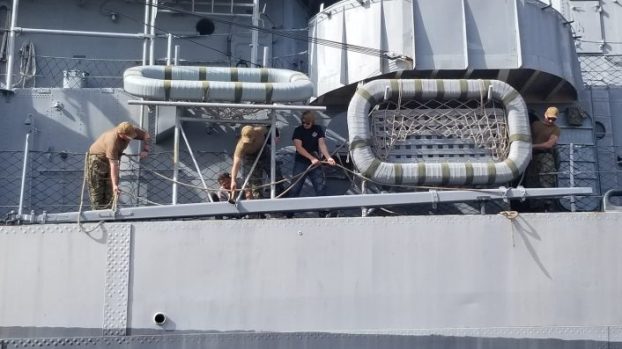 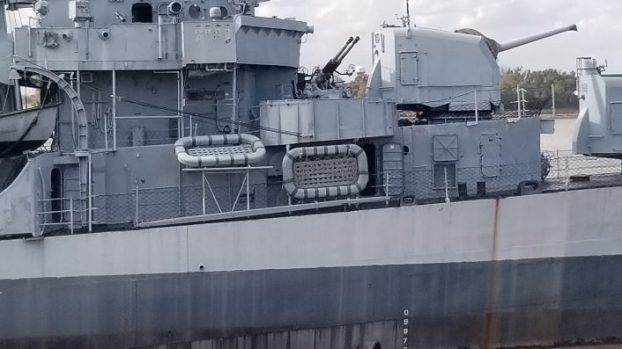 “A newly installed boat boom rests in its cradle on the main deck of the museum ship USS KIDD (DD-661), located in downtown Baton Rouge, Louisiana.”

By USS Kidd Veterans Museum Staff
BATON ROUGE, LA – The staff of the USS KIDD Veterans Museum added one more piece to their 40-years-and-running restoration puzzle last week on December 5th: a wooden boat boom, used to moor the ship’s whaleboats when they were deployed. While the boom may be new to those who were born in the 21st century, longtime fans of the museum and residents of Baton Rouge may remember a time when the venerable destroyer displayed such an item after first coming to town.
“It’s both an old and new item,” said Tim NesSmith, Ship Superintendent and Education Outreach Coordinator. “Not long after KIDD arrived in Baton Rouge in 1982, our staff and volunteers were traveling to Reserve Fleets around the country, salvaging parts for her restoration. They came back from Philadelphia at some point with the boat boom of her sistership, USS CAPERTON (DD650). It was installed and was there for several years before the weather got to it.”
The wooden boom eventually succumbed to South Louisiana’s humidity and rot set in. Unable to be salvaged, it was removed and sent home with a volunteer, the late Jesse Eaves of Denham Springs. A master woodworker, it was hoped that Eaves would be able to fashion a replacement. But crucial factors like time and funding are believed to have delayed the replacement, pushing it further down the priority list, until the boom fell out of memory for all but a few.
In 2018, when the film crew for Greyhound was in pre-production, director Aaron Schneider approached NesSmith with video footage of a destroyer rescuing aviators at sea using a cargo net draped from a boat boom. He was unaware that it was actual footage of KIDD from World War II.
“He wanted to know where it was; what happened to it,” said NesSmith. “One of our volunteers, Garrett Lynch, had told me the story. So, I made a call to see if the metal fittings were still around.”
The fittings were indeed around. Eaves cleaned and painted them before delivering them to the museum and the Greyhound set dressing team got to work fabricating new woodwork. The completed boom can be seen in a blink-and-you-miss-it scene where the crew of the fictional USS KEELING rescues survivors from a torpedoed merchant vessel. Once production wrapped, the film crew returned the completed boom to the museum.
A boom fabricated for filming in the sheltered sound stages of Celtic Studios was not yet ready for display in the South Louisiana weather. The museum staff had no wish to repeat history with this rebuilt piece. But the fabrication and installation of a torpedo blast shield replica that same year pushed the boom down a notch in priority and then the COVID-19 pandemic struck.
“We were ready to go for Spring 2020,” NesSmith said. “We had obtained rigging plans from former volunteer Byron Como. We purchased the cable rigging via a grant from Tin Can Sailors, Inc. We just needed to seal the wood really well and paint it. Then, COVID hit and we tucked it away out of the weather until the right opportunity came along.”
Volunteer Fred Enters and staff member Nathan Bergeron took on that task this fall, sanding, filling, and sealing the wood before painting it in KIDD’s wartime camouflage. The right opportunity arrived last week in the form of three crew members from the latest ship to bear the name KIDD, the Arleigh Burke-class guided missile destroyer DDG-100. The trio were in Baton Rouge to represent their ship at the museum’s Pearl Harbor Day observance, and to do a little volunteer work aboard their ship’s predecessor. They were keen to help add a new piece to the puzzle.
“We saw tradition in action last week as sailors from the 3rd KIDD namesake returned a piece of history to the elder namesake,” said Parks Stephenson, Executive Director of the USS KIDD Veterans Museum. “This simple boatswain’s task both connects them to their past and continues KIDD’s legacy to the present day. In this way, we keep the memory of Rear Admiral Kidd’s sacrifice alive and all those who sailed in the ships that bore his name.”
“It’s a small detail,” said NesSmith. “But no less important. People may not even notice it unless we deploy it. But for the boatswain’s mates and coxswains who handled the boats, and anyone who went to liberty via whaleboat, it’s a detail that mattered to them.”
For more information, please contact Ship Superintendent Tim NesSmith via phone at (225) 342- 1942, Ext. 11 or via email at TNessmith@usskidd.com.