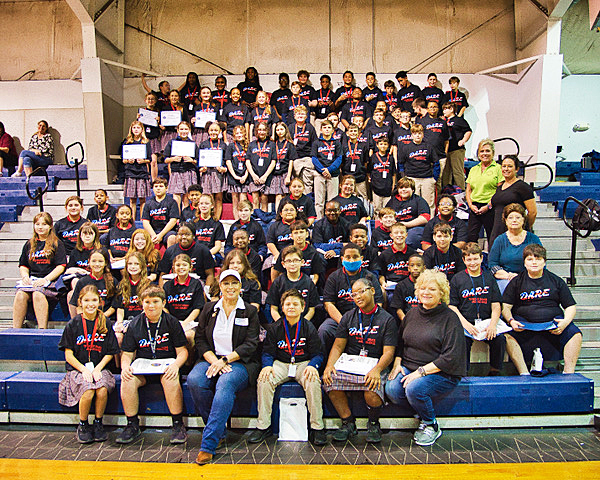 District Attorney Bridget Dinvaut and her staff sit with the newest D.A.R.E. graduates, fifth and sixth graders from Riverside Academy in Reserve.

Riverside and St. Peter Catholic School were the first to re-instate D.A.R.E. for fifth and sixth graders. District Attorney Bridget A. Dinvaut’s Office is in the process of bringing Drug Abuse Resistance Education to all St. John Parish Public Schools.

“It’s exciting to bring it back to St. John Parish. The D.A.R.E. program is huge because students learn skills and tools to use with peer pressure, bullying, alcohol use and abuse, how to effectively communicate, effective listening, and resistance strategies that make them feel safe and secure about saying ‘no’ or reporting to a trusted adult when they feel like they are in a situation that needs intervention,” Dinvaut said. “This type of education it’s so important to give to students, especially at an impressionable age, so they can carry on that information.”

Cindy Faucheux served as instructor of the 10-week program at Riverside and St. Peter. A former law enforcement officer with the St. John the Baptist and St. James Parish Sheriff’s Offices, Faucheux was initially certified to teach D.A.R.E. in June 2016. After retiring from the St. James Parish Sheriff’s Office in 2021, she was hired by D.A. Dinvaut.

Riverside Academy Principal Holly Haus announced a 100% graduation rate among fifth and sixth graders in the D.A.R.E. program. During Wednesday’s graduation ceremony, each student received a certificate, a goodie bag, and a graduation picture with Darren the Lion.

Fifth graders Enai David and Pierre Rauch and sixth graders Laiken Delaneuville and Brinley Roccaforte were announced as class essay winners. Laiken was selected as the overall winner, and his essay will move forward to compete at the state level.

Laiken admitted that, at the beginning of the school year, he was disappointed to learn that his class would be participating in D.A.R.E.

“I honestly really enjoy my PE time, and I thought what more do I really need to know about drugs? I already knew they were wrong and I would never take part in these activities,” Laiken said. “I admit I was very wrong. DARE was not just teaching about drugs. It was filled with many lessons. My mom calls them life lessons. It has taught me to stop and think before making decisions. I now think about if my decisions will just affect me, or will it also affect the people around me? I also learned that communication is very important. I can talk to people that I trust.”

Dinvaut said Laiken’s essay stood out because it was in first person and represented his journey through the D.A.R.E. program.

“He talks about his disappointment, but then he also talks about his astonishment with the new things that he learned. That’s the beauty of D.A.R.E.,” Dinvaut said. “When you can relay to them those resistance strategies, it sort of opens up the door for communication and makes them feel very safe. He talked about how he felt and what D.A.R.E. meant to him, and he was wrong about his initial feeling. He felt he would be stronger and have the ability to say ‘no.’”