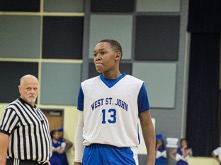 Jajuan Jackson is a member of the Rams basketball team.

In the first quarter, East St. John jumped out to an early lead, 7-2. Rams coach Courtney Evans normally prefers to use timeouts later in the game, but he felt the need to explain to his team that they must not panic and instead execute what they have been successful all season long on the defensive side of the floor.

At halftime, the score was almost tied up at 13-12. Assistant Coach Morell did a great job of substituting defense for offense in the second half, which helped push the lead to 28-12 at end of the third quarter. During the run, J’kyren Morris and De’Avonii Bartholomew hit two key three point shots that pushed the lead to 20-12.

De’Avonii Bartholomew was big at the free throw line as well, going 5/6. Jajuan Jackson filled the stat sheet as well with 16 points, four blocks and three assists. Kadyn Smith and Dai’Shadd Waxter play huge roles on this team, according to Evans.

“Kadyn is a high energy guard with a very high IQ of the game. He makes it very tough on the defensive side for guards & finish when the opportunity presents itself. Dai’Shadd is post player that can make it difficult for defenders at times because he can handle the ball,” Evans said. “I told our team: Defense, Free Throws and Rebounding. If we focus on these areas of the game, we will have plenty of chances to win games.”

The West St. John Middle School basketball team is 4-1 on the season but still under construction.

The upcoming schedule is as follows: