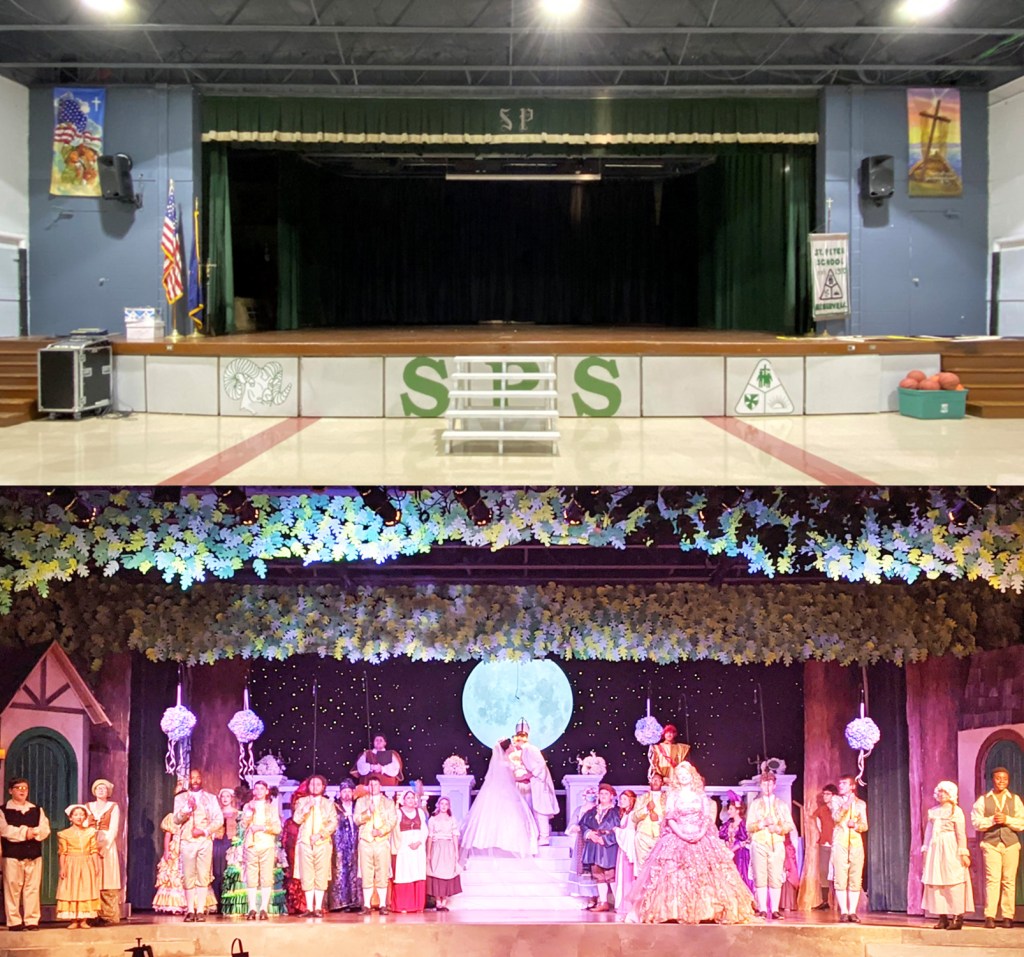 The St. Peter Catholic School stage is fully transformed with each production.

RESERVE — The road to success is rarely an easy path. River Parish Community Theatre can certainly attest to that.

Originally formed as St. James Community Theater in July of 1987, the non-profit group has seen its share of challenges. None have been insurmountable, and now RPCT is seeing the fruits from their labor of love. St. James Community Theater performed musicals, a Living Christmas Tree, and other small productions from their inception until a hiatus from summer musicals in 2008. SJCT’s last performance was the Living Christmas Tree in 2011 before the group reorganized for a summer musical in 2015.

A new board convened in the fall of 2014 and decided to bring back a summer musical with ‘The Addams Family’ in the summer of 2015 — with no set, props, or costumes, and very little money.

RPCT’s Sean Roussel recalled that effort, saying, “We had virtually nothing usable to start with except determination. Aside from not having set, costumes, etc. We had almost no money in the bank. We borrowed the money to get the rights. We also had to address the question of where to put the show on. There was no venue available in St. James or St. John parishes, so we met with the leadership at St. Peter School. Fr. John Marse, Pastor, and Mrs. Marie Comeaux, Principal met with John LeBlanc, Darryl Clement, and me to discuss the idea. Since St. Peter School is where community theater got its start in the River Parishes, we felt this revival belonged there. They were willing to take a chance with us in a partnership and we were off and running. We haven’t looked back since.”

‘The Addams Family’ enjoyed a very successful run, averaging 300 people per show, and provided the momentum and finances the theater group needed to continue their work. Following ‘Addams’ was ‘Shrek’ in the summer of 2016, and the group faced another decision that would help them decide the direction of their work for years to come.

Roussel said, “We were named St. James Community Theater but were performing in Reserve with a cast and crew that came to us from Jefferson Parish to Ascension Parish. Raising money and promoting our events was challenging. We decided on a re-branding. We developed a new logo and selected the name River Parish Community Theatre as our trade name. It really represents who we truly are.”

In 2017, River Parish Community Theatre brought ‘Annie’ to the stage and marked the turning point in the group’s success, according to Artistic Director Darryl Clement. Clement said, “Until ‘Annie’ we would go into auditions hoping to have enough talent to cast a show. When we had nearly 80 young ladies arrive to be cast as an orphan, we realized we had created the reputation of being high quality, and people wanted to be part of that. We doubled the size of the orphan cast, making 12 spots available. The second weekend of the show was sold out once people saw what we had created.”

Along with a very strong show in 2017, RPCT invested some of the money they had raised into new seating for the audience. Prior to that they used St. Peter’s metal folding chairs, which made a 2.5 hour show challenging to sit through. Board member Cary Berthelot said, “We bought cushioned chairs – and they all matched! People were very appreciative and recognized we weren’t in this to just put on a show. We wanted to create an experience. Darryl’s idea to extend the set to include the whole auditorium was a genius addition to that experience.”

Clement wanted to have the audience feel they were actually in the place the show was set, so he lined the entire wall lines of the school auditorium with New York City sky scrapers, and had them lit up. Clement said, “The entire room felt like walking through NYC. People were amazed when they walked in.”

Then 2018 marked a new high point. When the group announced ‘Beauty and the Beast’ was its choice for a summer show, the doors were blown wide open. Over 120 people auditioned for the show, forcing the audition meeting to the Riverside Academy gymnasium to accommodate all the interested people. A stellar cast was announced and, for the first time in the area’s history of community theater, the show sold out every seat of every performance before the show opened. This included adding a performance as well as 25 more seats to the seating chart. “Unbelievable”, said Clement. He continued, “We had a cast of 65 people on that stage – an extremely talented group. The audiences got everything they had hoped for, and so did we.”

After ‘Beauty and the Beast’, and with a growing inventory of costumes, set pieces, props and technical equipment, RPCT asked local business RTC (now REV) for some help. The former telephone company headquarters in Reserve was vacant and located only two blocks from RPCT’s venue at St. Peter School. Roussel said, “We asked them if we could store some of our things there. Timing was perfect and, before you knew it, we were cleaning the building up, fixing some things, and moving our stuff in.”

The 2019 summer show was ‘Mary Poppins’, another big success. Following that show, RTC (REV) offered to donate their former headquarters to RPCT to make their permanent home. The telecommunications company appreciated the care RPCT took of the facility and how the theater group made themselves part of the neighborhood, so the move made sense. The only thing that stood in the way of that transaction was a new roof. The old roof was deemed uninsurable and RPCT had to figure out how to raise enough money to replace a $70,000 roof so they could accept the building.

RPCT Board Member Roblyn Milligan said, “This was not just about us getting a building. That building has been a landmark in the community since the 50’s. Of course, we needed the building, but it also gave us a chance to further cement our place as a community partner. I believe that philosophy made it easy for the community to support the project.”

As fortune would have it, the COVID pandemic cancelled plans for ‘Matilda’ in 2020, but provided the time for RPCT to launch its ‘Raise the Roof’ initiative. Milligan said, “We hoped to raise $50,000 of the $70,000 needed. Through individual donations, corporate donations, and grants, we were able to raise nearly the entire amount needed. The community really responded and was very generous.”

Part of the Raise the Roof initiative was the idea to hold a live-streamed telethon. Former board member Maria Hotard-Stelly recalls, “Due to COVID restrictions, we could only have 10 people at St. Peter at a time. We set up a skeleton crew to stream the show and shuttled our performers back and forth from our headquarters via golf carts. Darryl and Sean hosted with a clear shower curtain between them for precautions. It was certainly unconventional but we had a tremendous response.” The telethon lasted nearly 4.5 hours and raised over $20,000 from community donations. The roof was replaced, ownership transferred, and a new home for River Parish Community Theatre was established.

Christmas of 2020 forced RPCT’s Christmas Concert to be live streamed as well and the theater group turned its attention to the summer. “Heading into spring of 2021, we were cautiously optimistic about returning to a normal summer production,” said Clement. “We selected Cinderella as our show, cast a stellar group, and were heading into our run with a beautiful production. Some who saw it called it our best ever.” Tragically, COVID made a curtain call and forced the production to be shut down out of safety and health concerns.

Roussel remembers that decision process well. “The whole process of dealing with the situation, making alternative plans, and eventually cancelling the show was dreadful. We had numerous video calls with the board trying to re-work the schedule to give our cast a chance to perform what they had worked for months on. All the while we never compromised safety or health. To have to look at 40+ faces staring back at me as we announced the decision to cancel was breaking 40+ hearts. I cannot recall that without also saying the community – our partners and our patrons – were overwhelmingly gracious and supportive. We are blessed to have such strong support from the community.”

With the pandemic finally loosening its grip on performances, RPCT’s 2021 Christmas Concert hosted an appreciative audience in St. Peter Church. Toward the end of the concert, Clement announced that the board for the theater had chosen to re-stage Cinderella.

Recasting everyone from 2021 who could return, the group welcomed 15 new cast members for the open spots and, for the first time in three years, put on a full schedule of Cinderella to the delight of the patrons.

Clement said, “We’ve worked hard to keep the arts thriving in our community, not only doing a summer production. The Christmas Concert, princess teas, a Christmas tea, a variety show/steak dinner, a telethon, and partnering with other local schools and groups keep up very busy, especially being all-volunteer with no recurring revenue stream.” RPCT relies on grants, donations, and old-fashioned hustle to fund their efforts. Clement continued, “We take great pride in putting on top-quality productions, no matter where we perform. We may not have a performing space of our own – yet – but we will not use that as an excuse to sacrifice quality.”

Knowing the community supports their work makes it all worthwhile, said Roussel. “Full audiences, a thriving patrons’ group (the RPCT Gems), and being voted the Best of the River Parishes for two years running speaks volumes. The community recognizes quality and hard work. We don’t take the easy path on anything we do. People can tell the difference. If the time comes when we think that’s a good idea, it’s time to quit.”

From a re-branding to a pandemic and everything in between, River Parish Community Theatre has persevered and come out better for the challenge. Roussel summarized it this way, “We re-started with almost nothing. Now we have a building that is full of sets, props, costumes, and technical equipment. We have a growing patrons’ group. We have the best volunteers we could ask for and an incredibly talented group of performers. We have passion and vision and we want to continue to share all of those things with the community to help the arts thrive.”

For more information about River Parish Community Theatre and how you can be part of their organization, see www.riverparishtheatre.org or follow them on social media @riverparishct.