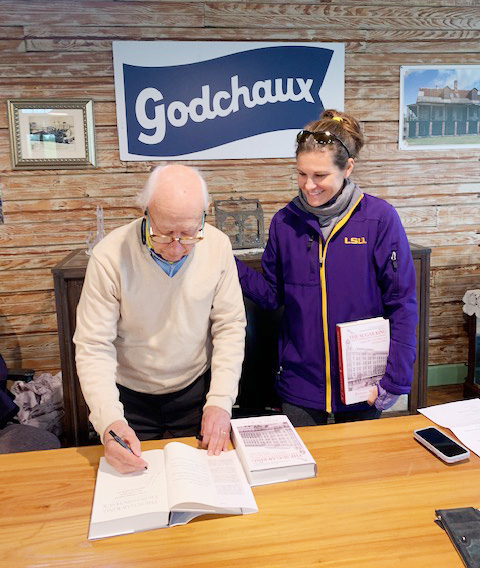 Peter Wolfe signs a copy of his new book, “THE SUGAR KING: LEON GODCHAUX, A New Orleans Legend, His Creole Slave and His Jewish Roots.”

RESERVE — Nearly two centuries ago, a penniless, illiterate 13-year-old boy landed in New Orleans and grew up to became the largest sugar producer and taxpayer in the state.

Leon Godchaux’s story is embedded in the history of Reserve, where a new generation is working to restore the historic house he once called home. Godchaux’s great-great grandson, Peter Wolf, recently visited the Haik Store near the site of the Godchaux-Reserve Historic House with signed copies of his new book, “THE SUGAR KING: LEON GODCHAUX, A New Orleans Legend, His Creole Slave and His Jewish Roots.”

The book signing marked the Godchaux-Reserve House Historical Society’s first event in the aftermath of Hurricane Ida, which greatly damaged the house but did not stop restoration efforts. In a statement, the Society’s Board of Directors expressed their excitement to host Wolf in the first stop on his book signing tour. The event doubled as the first fundraiser post-Ida with gumbo and jambalaya sales to continue raising funds for the Godchaux-Reserve restoration.

For Wolf, an honorary member of the Historical Society, the book signing at the Haik Store felt a lot like coming home.

“Everyone was so warm and cordial. It was great to hear people tell me their stories and their connections to the Godchaux family and the sugar business,” Wolf said. “I’ve been in Reserve a number of times, working, interviewing, trying to restore the Godchaux-Reserve House, but there were people I’ve never met who came and chatted with me, and it was wonderful to see.”

Wolf first heard Leon Godchaux’s name as a child during conversations with his grandfather, sitting on a porch in Pass Christian. Later on, while working in the French Quarter and living on Burgundy Street, he came to learn that Godchaux had once lived about seven blocks away on Esplanade.

It wasn’t until Wolf started working on a memoir, “My New Orleans, Gone Away,” that his interest in Godchaux’s story was truly ignited.

“I had to think about where our family came from to write my memoir,” Wolf said. “I began to look into this young guy who came to New Orleans all by himself and started our family. Who was he? I found there was almost nothing about him published, and that intrigued me, so I kept going.”

Soon, Wolf was venturing to neighboring parishes to dig up whatever information he could on Godchaux’s elusive history. His research led him to notary offices in St. John the Baptist and other parishes where Godchaux owned property; U.S. Census records in New York and New Orleans; obituaries from various local newspapers; and mountains of archives from Tulane, LSU, and the Historic New Orleans Collection.

“Leon Godchaux couldn’t read or write, so he hadn’t left anything behind, but there were fragments, bits here and there, all over South Louisiana,” Wolf said. “I just tried to piece those together using archives, published sources and a lot of unpublished documents including contracts. It took five to seven years to put it together.”

Every time Godchaux’s signature appeared in a contract, it was always very loopy and childlike, and it made Wolf ponder how a young man with no mentors or formal education rose to became the largest sugar producer and the most revered retailer in the region.

Most surprising to Wolf was uncovering the history between Godchaux and Joachim Tassin. The lore passed down through family stories and in published works was that Godchaux and Tassin were close friends who more or less grew up together after Godchaux landed in New Orleans. It was a shock when Wolf uncovered that Tassin was enslaved, purchased by Godchaux.

“Godchaux and Tassin concealed that fact through each of their entire lives. I tried to write extensively about that,” Wolf said.

During the recent book singing, Wolf spoke with community members who were excited to learn more about the Godchaux family. He hopes his book is a means to not only tie fragments of forgotten local history together, but also provide more information on how the family exited the sugar business.

While the first edition of “The Sugar King” is already nearly sold out only a month after its release, Wolf still has copies available. Individuals interested in obtaining a signed copy can contact Wolf at peter@peterwolf.com.