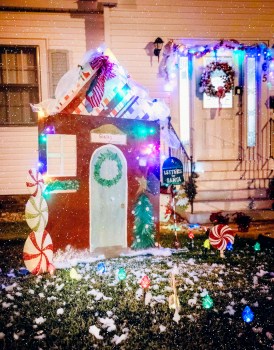 Local families are invited to look for Santa’s Workshop on Goodhope Street in Norco, near Apple Street, and leave their children’s letters in the magical North Pole mailbox. 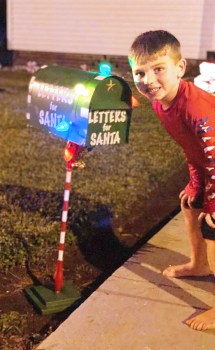 The Santa mailbox presents a great opportunity for children to learn how to address an envelope and mail letters.

NORCO — When local photographer Brittney Cannon no longer needed the mailbox used for Santa mini sessions, she came up with an idea to spread Christmas cheer to children in her community.

The magic mailbox now sits outside of Cannon’s home on Goodhope Street in Norco, providing a direct route for children’s letters to Santa to travel from the River Parishes to the North Pole.

During the recent photo sessions, Cannon watched as children read their handwritten notes to Santa. Now she has a chance to add to the Christmas magic.

“I personally wish we had more local events and experiences for our children, and I do not like the idea of having to drive to the city for everything. I thought having something local for kids to experience would be great,” Cannon said. “I figured, even if people are not coming for photos, all children should have a chance to mail Santa a letter or receive a Christmas experience if they cannot make it into town. I loved the idea of possibly being able to provide that for these kids and bring a smile to their faces.”

While being sick on and off prevented Cannon from making the set-up as elaborate as she imagined, she was still able to decorate a wooden display representing Santa’s workshop.

As she watched a mother walk her two kids up to the mailbox, Cannon decided to bring a snow machine outside to

make the moment even more special.

The children looked at the display, grinning with excitement, and asked how Santa would receive their letters and whether they would get one in return.

Cannon told the kids to put their letters in the mailbox and make sure the flag was pointed up, just like when sending mail in a regular mailbox. Doing so notifies the North Pole mailroom and alerts Santa to the letter. Then, while everyone is sleeping, Santa can send his elves to the magical Goodhope mailbox to collect the letters and deliver them to the North Pole.

While the exact address is not being publicized for safety reasons, Cannon invites families to visit the mailbox on Goodhope Street in Norco, one street over from Apple Street. The mailbox will be outside until December 18.

All letters to Santa should be contained in an envelope addressed to Santa Claus at 123 Elf Road, North Pole, 88888. To receive a letter back from Santa, the child’s name and address should also be included on the envelope.

“This is a fun learning experience to teach kids how to mail letters,” Cannon said.

Families should include a ready-to-use stamp inside of the Santa letter. Santa already has envelopes and is prepared to address a letter to each child. According to Cannon, the return envelopes will be either green or red with handwritten text outlined in gold. Each envelope will include a wax seal enclosing a handwritten letter with a signature from Santa himself.

Cannon hopes to continue this new tradition year after year to build a sense of community.

“We need more things within our community, not only because going to the city is sometimes an inconvenience, but because having a sense of community embraces spirit and character. It is a feeling that shows people, and these kids, we matter to one another,” Cannon said. “Being a part of a community can make us feel as though we are a part of something greater than ourselves and we need more of that these days. I feel as if we all have gotten away from this slowly and I hope to bring that back. A simple act of kindness can go a long was and I hope that I can make at least one child’s day/Christmas a great one!”