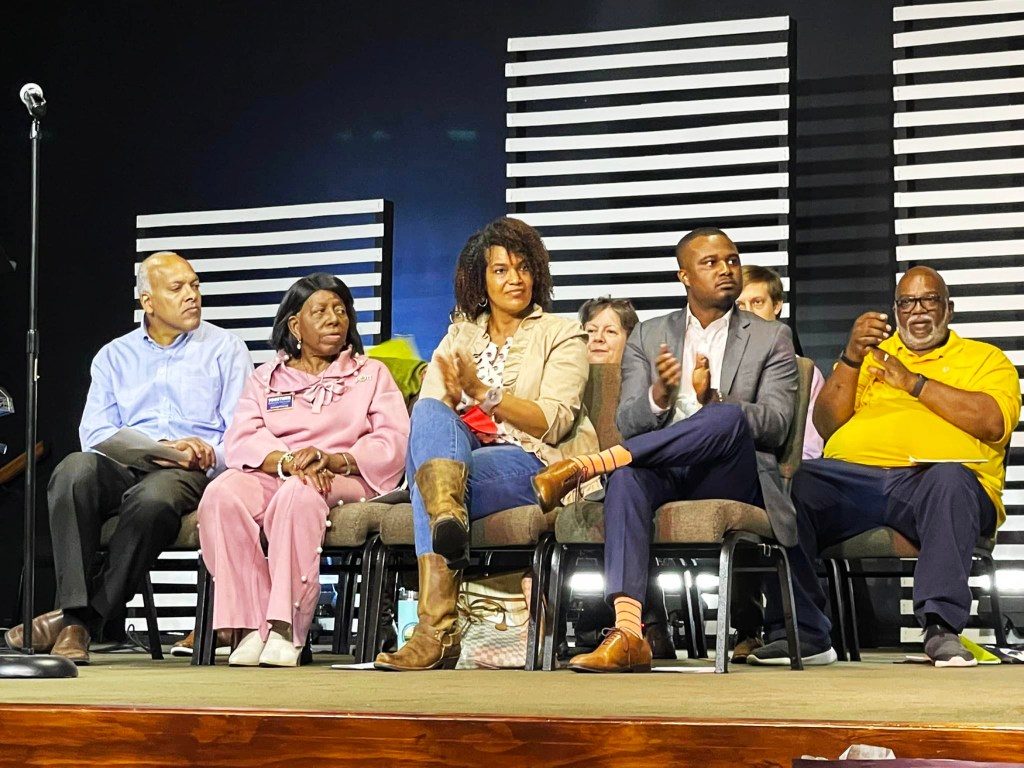 LAPLACE — Spanning from Baton Rouge to New Orleans, delegations from the 10 parishes represented by the Public Service Commission District III assembled at New Wine Christian Fellowship in LaPlace this past Saturday to seek answers regarding lowering electric bills, reducing power outages and shifting to renewable energy.

Both candidates for Public Service Commission were invited. Candidate Davante Lewis was in attendance, and he shared his platform with more than 50 congregations and civic organizations during the recent assembly. Lewis will appear on the ballot alongside Lambert Bossiere, who has represented District III since 2005.

At the beginning of the event, the Rev. Byron Johnson of Central Missionary Baptist Church of New Orleans spoke about the unique benefits and challenges of living in the corridor along the Mississippi River in Southeast Louisiana. He described it as a region that has a great number of people living in poverty and pollution, yet also contains great diversity and economic promise with one of the largest ports in the world.

“Most of all, we have the answers to the problem,” Johnson said. “These communities behind me are united by a common vision, mutual solidarity, mutual support. We are united because we are not Cancer Alley anymore. We are Answer Alley, and here in Answer Alley, we come together.”

Representing the River Parishes during the assembly were Dr. Joy Banner, co-founder of the Descendants Project, and Sharon Lavigne, founder of RISE St. James.

“Our part of building Answer Alley is that we educate, we activate, we agitate, and if that’s not good enough, we litigate,” Banner said.

Lavigne said that “Answer Alley” to her represents a commitment to prayer and education for all ages.

Attendees noted that utility costs have skyrocketed from Summer 2021 to Summer 2022, with Entergy presenting a 91% increase in expenses. When questioned what the PSC can do to lower the cost burden of electricity to Louisiana families, Lewis responded that each fee listed on the bill is a reflection of what is voted upon by the Public Service Commission.

“I propose we pass the Rate Payers Bill of Rights to examine each one of these excessive fees, put in fixed billing for seniors and individuals with disabilities, and stop allowing Entergy to continue to raise its profit margins without making the significant investments,” Lewis said.

With Louisiana ranking 45th in the nation in energy efficiency programs, Lewis expressed a need to invest more money into programs locally and build stronger connections between parish governments and the Louisiana governor’s office.

“After Hurricane Ida, patients in dire condition flooded the emergency room. Some scarcely made it, and some did not,” Thompson said. “Electricity, for my patients, was not a convenience. Electricity for my patients and others like them is simply a matter of life or death.”

According to grassroots organization Together Louisiana, 29 individuals died in the region following Hurricane Ida, with 27 of those deaths attributable to the effects of power outages.

Lewis told attendees charges for grid resiliency are already embedded within energy bills, and it’s time to hold companies accountable for making the improvements residents are already paying for.

Pastor Neil Bernard was pleased to share that New Wine Christian Fellowship in LaPlace has been selected to become one of the pilot “community lighthouses” in Louisiana, using solar energy to keep the lights on when the grid goes down during emergencies.