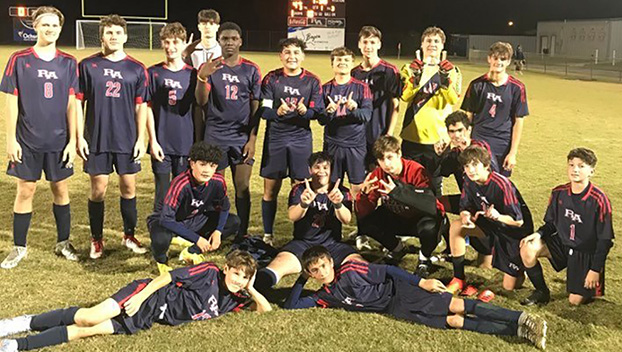 BY THE REBEL EXPRESS STAFF

RESERVE — Enrique Delgado was an eighth grader. Cobey Wahden was a fifth grader. And Brady Bourgeois was only 8 the last time the Riverside Academy boys soccer team won a match.

It was Jan. 13, 2018 when the Rebels defeated Ascension Christian, 4-3, on a frigid night. The team would not do it again until this past Monday night.

Kaleb Brumfield scored the first goal just 30 seconds into the match. Craig Matt and Cameron Matt each added goals before the intermission. Then, eighth grader Tristen Sejas added the exclamation point with a break-away in the final minute.

It was a long time coming for Delgado, who considers himself a serious soccer player. As players came and went over the years, things became more and more difficult, but he never gave up hope.

When he realized that Monday’s victory was really in-hand, Delgado said began to get emotional.

“When it hit five minutes in the second half, I just started breaking down crying,” he said.