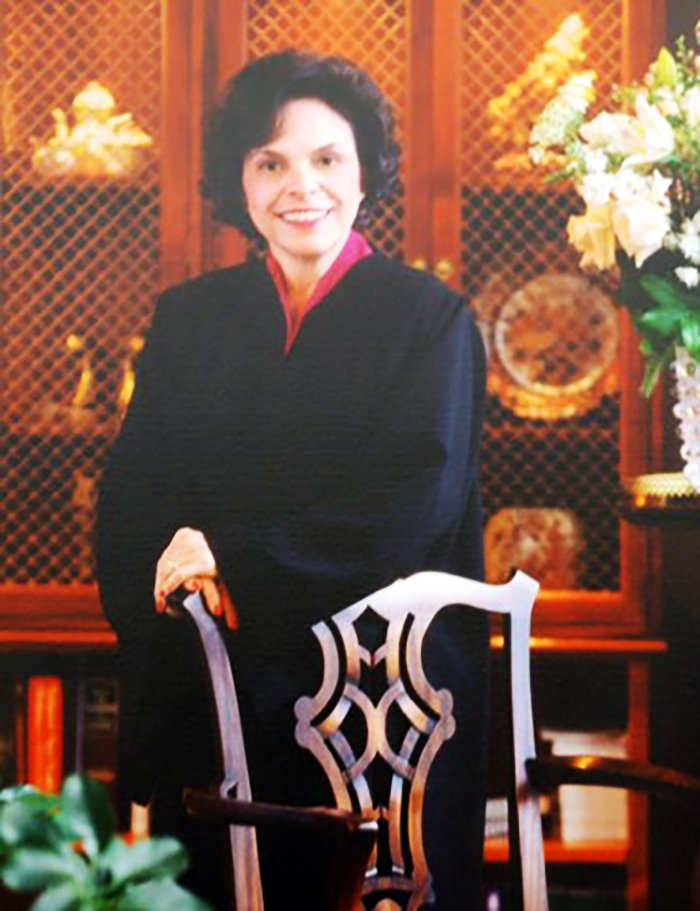 The Honorable Mary Ann Vial Lemmon, a River Parishes native, is being recognized by Loyola University.

HAHNVILLE — When the Honorable Mary Ann Vial Lemmon attended law school at Loyola University in the 1960s, she was one of two women in her class. A trailblazer on all fronts, the Hahnville native went on to become the 54th female attorney in Louisiana, the fifth female district judge, and the first female judge in St. Charles and St. John the Baptist parishes.

On December 2, Lemmon will be presented with the Integritas Vitae Award during Loyola University’s annual 1912 Society Dinner at the Higgins Hotel in New Orleans. Translated as “a life of integrity,” the award is one of Loyola’s highest honors to recognize individuals of outstanding character from all walks of life.

The Rev. Justin Daffron, S.J., interim president of Loyola University, stated, “Remarkably, (Lemmon) does not seek that recognition, quietly living her life in service to God and to others.”

Lemmon credits the influence of Loyola University and staff, particularly the Jesuit priests, for contributing to her sensitivity to the needs of others.

“Receiving this Integritae Vitae award confirms for me in a concrete way that I have lived up to goals I have aspired to during my entire life. I hope to continue this quest going forward,” Lemmon said.

Lemmon’s upbringing in the River Parishes contributed to her success in the legal field. She enjoyed the privilege of having teachers who treated students as family and instilled a unique opportunity to excel.

Several of Lemmon’s relatives set a positive example as leaders within the community. Her paternal grandfather, Leon C. Vial Sr., served as sheriff for many years and operated a soup kitchen in his front yard for the needy during the Great Depression. Meanwhile, her maternal grandfather, Sidney Simoneaux Sr., cared deeply for the trappers he employed and contributed to their wellbeing by transporting them and their families to medical appointments.

Lemmon’s legal journey followed in the footsteps of her father, Hahnville attorney James P. Vial, who graduated from Loyola in 1935. During her time in law school, Lemmon served as editor-in-chief of the Law Review and graduated second in her law school class while raising a young family.

Lemmon married fellow Loyola law student Harry T. Lemmon during December of her first year in law school and gave birth to the first two of her six children while still in school. She was pregnant with her third during graduation.

“Several women have thanked me for giving them the strength to embrace a professional life while handling the challenges of raising children and having a meaningful family life,” Lemmon said “My first acknowledgment had to be that only I could raise my children and that I was required to keep my schedule flexible to meet the needs of my family. Being involved with their activities was a must.”

Lemmon served as a Girl Scout leader, a Cub Scout mom and remained active in the community while growing her law career. She still recalls hauling her 4-year-old son, Patrick, to League of Women Voter’s meeting, which likely contributed to him becoming a political enthusiast to this day. Each of her children have contributed to the community in unique ways.

Lemmon’s legal practice was limited to family law, personal injury, some real estate development and oil and gas work. While many women lawyers at the time were offered only secretarial jobs, Lemmon was able to move quickly into a district judgeship, which she held for 15 years before being appointed to the federal bench for the Eastern District of Louisiana courtesy of President Bill Clinton. Prior to her presidential appointment, she served as a member for the executive committee of the American Bar Association National Conference of State Judges.

“Having the support of my husband throughout my journey was essential. And of course, I was there for him as he pursued his career first as a judge on the on the Fourth Circuit Court of Appeal for 10 years then on the Supreme Court of Louisiana for 21 years,” Lemmon said.

While Lemmon was a trailblazer in the legal world, she proudly recognizes that women now comprise the majority in many law schools.

More information about the Integritas Vitae Award can be found at https://www.loyno.edu/integritas-vitae-award