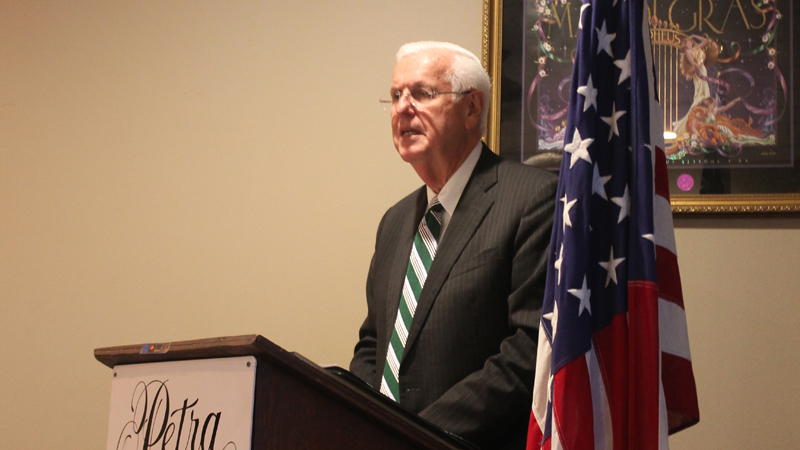 Since the double-punch of Hurricanes Laura and Delta in 2020, 11 residential property insurance companies doing business in Louisiana have been declared financially insolvent and 12 can longer conduct business in the state.

To cover the outstanding claims of the insolvent insurers, the state-chartered Louisiana Insurance Guaranty Association borrowed $600 million state-approved dollars. This debt will be paid through an assessed fee on Louisiana’s other insurance companies.

State Insurance Commissioner Jim Donelon confirmed claims of an insurance crisis are not an over-exaggeration during a recent PAR-hosted webinar. He was joined by state Sen. Jeremy Stine, a member of the state insurance commission, and Kevin Cunningham, Southern Strategy group partner and insurance commission lobbyist, to discuss Louisiana’s insurance situation.

“Our state is in a crisis comparable to, perhaps, even in some respects greater than the aftermath of Katrina and Rita back in 2005,” Donelon said. “There is no overstating the crisis. It is at our door, we are in the midst of it, and hundreds of thousands of our citizens and property owners in the state are suffering as a result of the aftereffects of the last two hurricanes seasons.”

After the previous two hurricane seasons, many Louisiana residents have had difficulties acquiring and maintaining insurance policies. Many have found themselves forced into a position to sell or abandon their properties, while some are simply unable to allocate funds to repair their homes.

Donelon said after the landfall of Hurricanes Rita and Katrina, about one million claims were filed, and $16 billion in payments for flood damage were distributed.

Donelon said the best measure of the current crisis is the residual market — “the state-sponsored … market of last resort for policyholders who cannot get insurance in the private sector.”

Louisiana Citizens is a non-profit organization that provides insurance of the last resort for both residential and commercial property owners when they are unable to acquire insurance through the private insurance market. The organization is mandated by the state to be more expensive than private property insurance companies.

On Jan. 1, 2023, residential property insurance through Louisiana Citizens’ will increase by 62.9 percent for the FAIR plan and 65.6 percent for the Coastal Plan policies.

Stine agreed these numbers are indications of a crisis.

“When Citizens’ rolls have tripled in less than two years, it’s a crisis,” Stine said. “When their exposures have gone from $6 billion to $33 billion, it’s a crisis.”

Cunningham added these issues are exemplified by issues in insurance cost and accessibility.

“You measure things with availability and affordability,” he said. “It is our belief that it’s a moment in time we believe the market will adjust.”

Despite this prediction, he said it is vital that efforts are made to strengthen the private market.

“We should be considering every available option,” Stine said. “In terms of me and the Legislature, we are willing to listen and learn from other states. With that being said we are currently operating within the confines of our current structure … that being the case, gotta move folks off of Citizens.”

Donelon said the first step to do this is depopulation, as rates will continue to increase on an annual basis if no corrective actions are taken. The state is now seeking to depopulate Louisiana Citizens.

The assumption date for Round 17 of Louisiana Citizens’ Depopulation Process is April 1, 2023. The process involves transferring selected policies back into the private sector market to authorized insured. To be authorized, insurers must be an admitted carrier, have a Certificate of Authority from the LDI and be rated at least a B+ by AM Best.

Donelon said refunds will be issued for policyholders who prepaid if they are depopulated before they hit 12 months.

“If someone gets an opportunity, as some companies are starting to write business today, to move from Citizens back to a private insurer, they can get their unearned premium for that 1 year they’re paying in advance for their policy from Citizens,” Donelon said.

To bring more insurers to Louisiana’s private market, the state has reinstated the Insure Louisiana Incentive Program, which successfully recovered the market following Hurricanes Katrina and Rita. Through this program, interested insurers will be able to submit grant applications to write business in Louisiana. Accepted applicants will receive funds at a minimum of $2 million and a maximum of $10 million.

Stine said the program is “a step in the right direction,” and confirmed that in December, a joint-budget committee meeting will be held to see if the $20 million in funding will be provided for the grant program.

He also recommended that Louisiana’s rate structure be reformed. He said the state’s current retaliatory taxes are discouraging new business. “We need to look at reforming our tax structure so that we can attract more business to domicile here.”

Companies who can no longer write business in the state