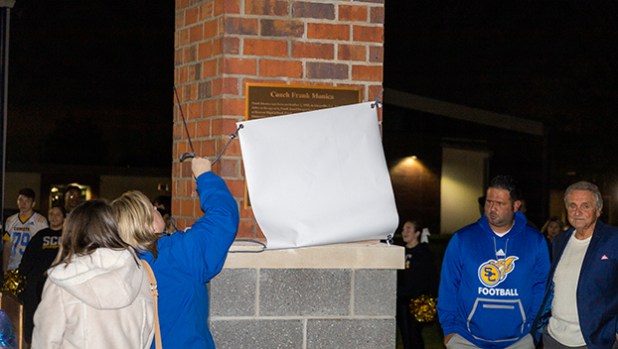 A plaque bearing Frank Monica’s name is unveiled on the right post of the archway. 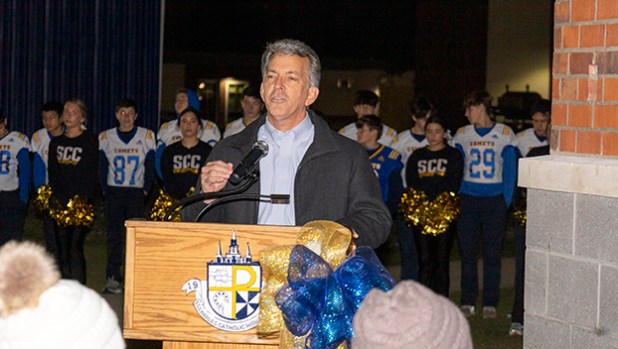 The project would not have been possible without the support of the Authement family. Louis Authement is pictured. 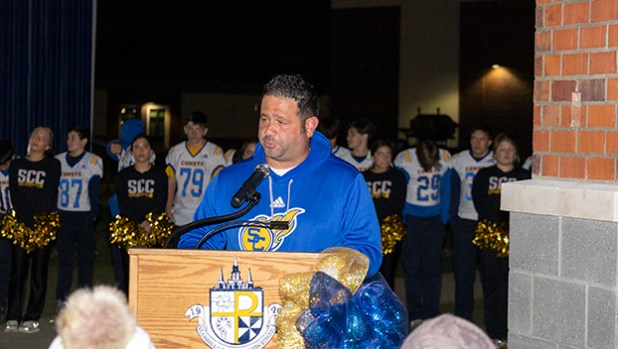 Coach Wayne Stein talks about the significance of the new archway. 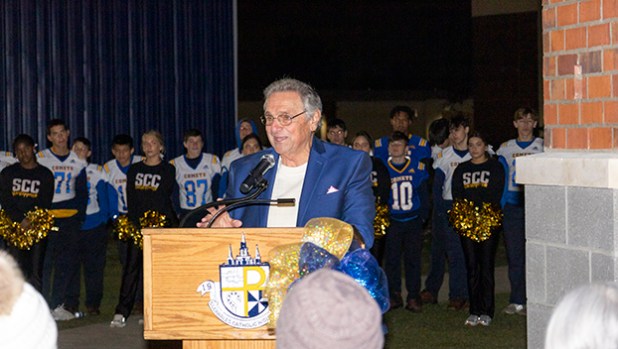 Retired coach Frank Monica speaks about his career at St. Charles Catholic as the new archway is dedicated in his honor. 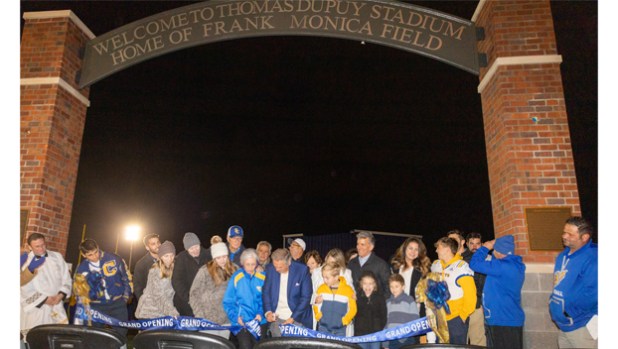 The Comet family gathers to celebrate the dedication of a new archway designating the Thomas J. Dupuy Stadium, home of the Frank Monica field. 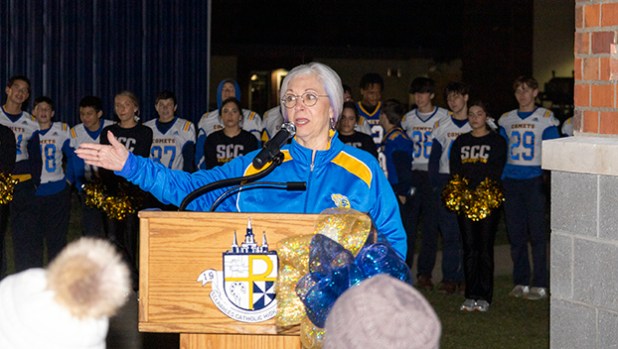 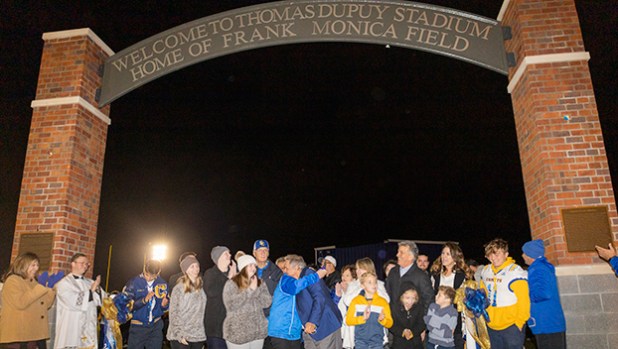 The Comet family gathers to celebrate the dedication of a new archway designating the Thomas J. Dupuy Stadium, home of the Frank Monica field.

LAPLACE — When Thomas J. Dupuy’s passion for the game is combined with Coach Frank Monica’s love for the player, the end result is a facility where the rich tradition of high school football is alive and well.

St. Charles Catholic fans gathered outside on a chilly Tuesday night to dedicate an addition to the campus footprint that honors two pillars of the Comet athletic program. A new archway welcomes the community to the Thomas J. Dupuy Stadium, home of the Frank Monica field.

The ribbon cutting ceremony kicked off with a prayer service led by school chaplain Father David Ducote and acknowledgement of the Authement family for making the new entrance a reality.

Coach Monica and the Quarterback Club spent many years making repairs to the campus athletic facility, whether in response to wear and tear or instant destruction from hurricanes. The new entryway has been designed to stand tall against the test of time, and Louis Authement hopes all who walk under will see it as a call to leave a mark on the program just as Dupuy and Monica have.

“Thomas J. Dupuy was football’s biggest fan. Though his life was so short, his legacy grows longer by the day. For many years after his death, his name will always be associated with the place where the rich tradition of high school football is alive and well,” Authement said. “For so many years, the field had no name. Now the name Frank Monica will always be above the field where he turned boys into men, not just in the physical sense, but in their morals. His morals are the type of morals that form the foundation of a healthy community, the type of morals that are needed in other places but are so lacking… Imagine this is a Dupuy-Monica play call to us all to have a passion for a purpose and couple it with a passion for each other.”

The left side of the archway bears a plaque dedicated to the program, explaining why it matters not just to the players and coaches, but to the fans and the whole community. On the right side is a plaque dedicated to Monica, who retired from St. Charles Catholic in 2021 after setting a career record as winningest coach in the River Parishes with 284 wins and 91 losses. His 50-year career in coaching included becoming a 2019 inductee into the Louisiana High School Sports Hall of Fame.

Monica was present for the ribbon cutting along with his family, and he served as the guest speaker for the Quarterback Club meeting that immediately preceded the dedication ceremony.

He said he was truly honored to have his name etched in a place where so many phenomenal games took place and where a multitude of core memories were made.

“I don’t deserve this. I felt like all I did was do my job,” Monica said. “All of the players, I just wanted to see a smile on their faces after every win and for them to put that banner up in their locker room. That meant more to me than anything else. This field will be here for a very long time. It will be a place where my grandsons will play and where my granddaughters will be cheerleaders or Starsteppers, and that’s very special to my heart and my family.”

Also on hand for the dedication was Dupuy’s mother, who expressed her desire to make sure her son’s story is told to the next generation of Comets.

“I thank the Comet family for all they have done for Tommy,” she said. “He was special, not just because he was my child. He was special to so many of y’all. I hope I can tell his story to the new people who come in, because it makes a difference. He had heart. He didn’t miss a game. He loved his Comets, and he truly left his mark on this Comet family.”

“It’s a reminder that this is a special place where you can leave your mark, no matter what your role may be,” he said.