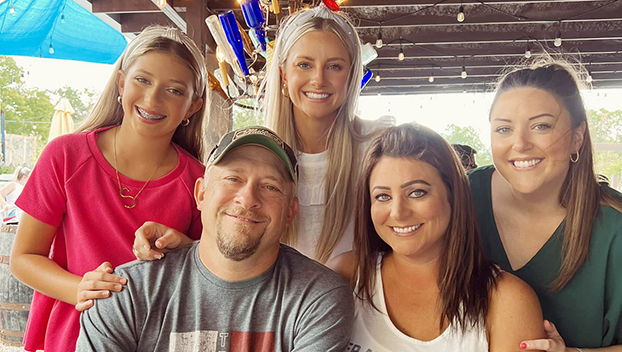 Tommy Milioto, a lifelong St. John Parish resident diagnosed with cancer, is surrounded by his wife, Dana, and daughters Janie, Sophie and Kristy.

RESERVE — Thanksgiving Week will kick off with an outpouring of support for a neighbor in need.

“Crushing Cancer for Tommy” will raise funds to alleviate the financial burden for the family of Tommy Milioto, a lifelong St. John the Baptist Parish resident currently undergoing chemotherapy for colorectal cancer. The charitable event is scheduled for 8 a.m. to 5 p.m. Sunday, November 20 at Reserve Bantam, located at 312 Railroad Ave. in Reserve.

Highlights will include mixed cabbage ball, cornhole and fishing tournaments, a colon cancer walk, a silent auction, live music, and refreshments including jambalaya and sweets.

Milioto was diagnosed with cancer on July 13, 2022. The following week, he learned the cancer had metastasized into his liver. After undergoing extensive testing, he began chemotherapy on August 15, 2022 at East Jefferson Hospital’s Yenni Treatment Center.

Once the first round of chemo ends in December, Milioto’s cancer will be re-evaluated to determine whether he needs additional treatment and/or surgery on his colon and liver.

Thomas Hymel, one of the organizers of the Crushing Cancer for Tommy event, said Milioto’s family now advocates for early detection and staying up-to-date on colonoscopies since his cancer was caught at a later stage.

“He was like every other guy who had a symptom here and there and thought it’s no big deal. When he finally went to the doctor, they discovered it, and it was something he had probably had for some time,” Hymel said. “His journey started out rough because he caught it later. The good news is that he is doing chemo, and it seems to be responding.”

According to Hymel, many families in St. John Parish known Milioto through his work as a trim carpenter with Milioto Inc. Over the past 30-plus years, he has worked on countless houses in the region. Since Milioto is self-employed and currently unable to work due to the intense side effects of chemo, the community hopes to take some of the financial burden off of him and his family.
According to Hymel, the events planned for Sunday are a reflection of Milioto’s involvement in the community. As a father of three daughters, Janie, Sophie and Kristy, he has been heavily involved with local recreation facilities over the years as a volunteer, coach and cook. He’s also passionate about turkey and deer hunting and enjoys spending time with his family at their camp in Mississippi.

“I think everybody knows somebody close to them that’s been affected by cancer. Everybody needs a little help from time to time,” Hymel said. “Hopefully people come out, spend a little money, have some food and listen to some music. That’s all we’re really asking. It’s all volunteers and all donations. It’s really been a big outpouring of support for him.”

The full line-up for Crushing Cancer for Tommy is as follows:

2 to 5 p.m. – Marty Poche and Jordan Babin take the stage

The silent auction is live now at https://cctm.betterworld.org/auctions/crushing-cancer-tommy-milioto. Items up for grabs include but are not limited to an electric smoker, a Mike Anderson’s gift card and overnight stay at the Clarion Inn, wine coolers, a propane turkey fryer, a hunting gift basket, a pirouge crawfish bundle, a car care kit, and tickets to St. John Theatre’s concert series.

Participants must create an account on the Better World platform prior to making a bid. Individuals will be asked to put in credit card information after making your first bid, but this is only to hold the spot for bidding. Winners can pay via cash, check, credit card or Venmo at the event on Sunday.

When creating an account, the website will prompt bidders whether to absorb the credit card transaction feel. Declining to absorb the fee will result in funds coming out of the auction profit. An automatic donation toward the Better World platform will be tacked on to each bid, but this is very easy to remove.