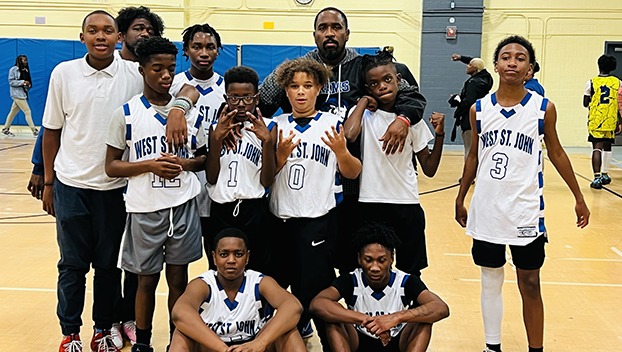 EDGARD — West St. John High School opened the 2022-23 basketball season on November 10 with a jamboree in Plaquemines, where the Rams rolled out to a 46-36 win against East Iberville.

Senior Dekalen Stipe led the team in scoring with 16 points, and junior Christian Milton added 10 points.  Freshman Justin Johnson provided great defense energy and chipped in five points to help put the WSJ Rams on top with a solid win.
The Rams were back in action after press time Tuesday, Nov. 15 with a home opener against Vanderbilt Catholic at 6 p.m. West St. John alumni and fans dressed in blue, and DJ Child Support provided music for the occasion.
The home opener ended in a 44-82 loss, but the Rams will be re-energized and ready to go for this weekend’s tournament hosted by Hahnville, followed by a home game against Morris Jeff on November 22.

Meanwhile, the West St. John Middle School Rams recently faced East St. John Prep. The Rams fell behind by six at the end of the first quarter but managed to tie the score at halftime, 13-13.

Coach Courtney Evans decided to not run the zone defense and switched to man, which caused the Rams to remain in the game and advance the lead to a 29-27 victory.

The leading scorers were as follows: