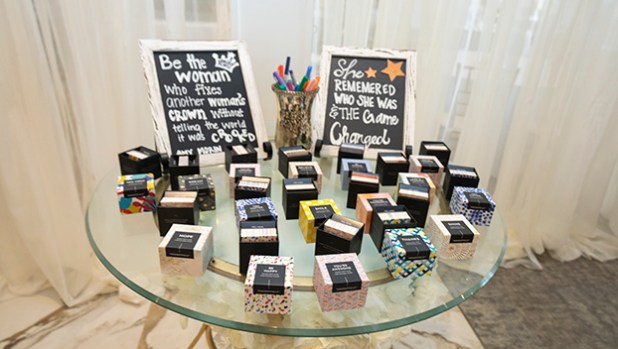 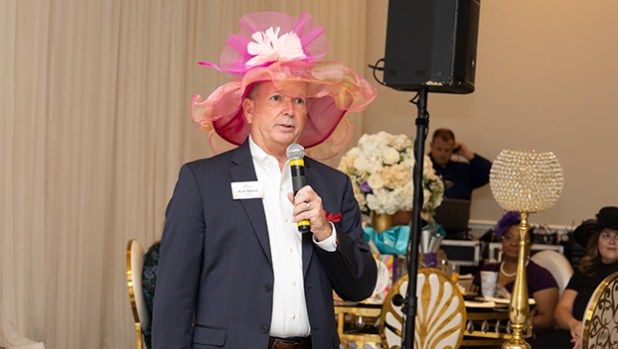 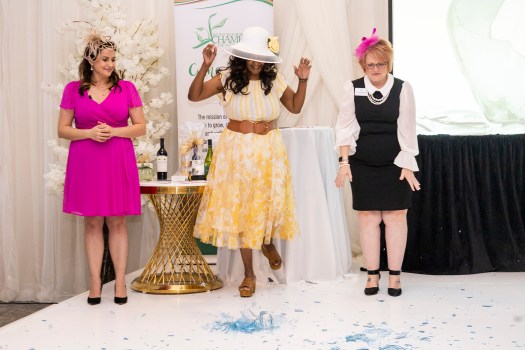 Dima Ghawi, left, invites guests onto the stage to shatter vases a break free from the self-doubt and fear of judgement that constrains them. 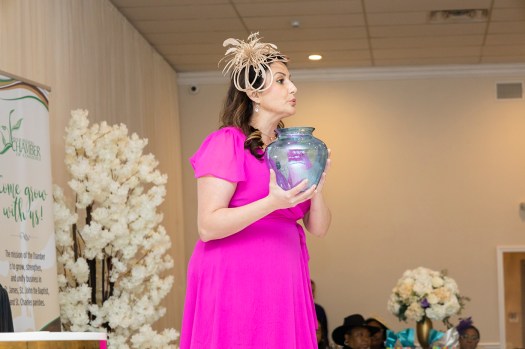 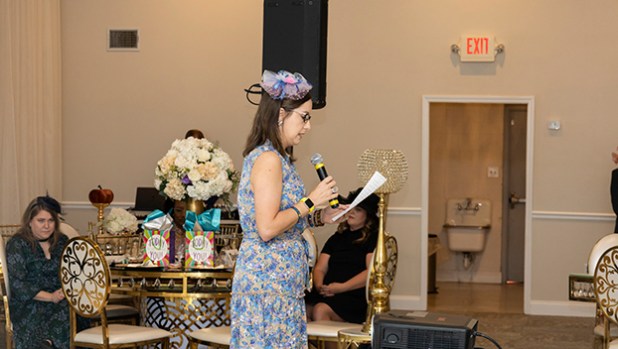 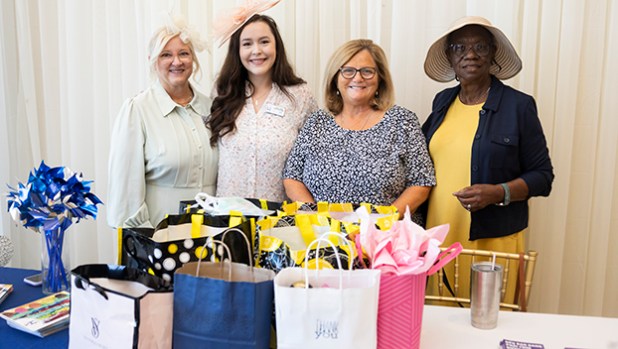 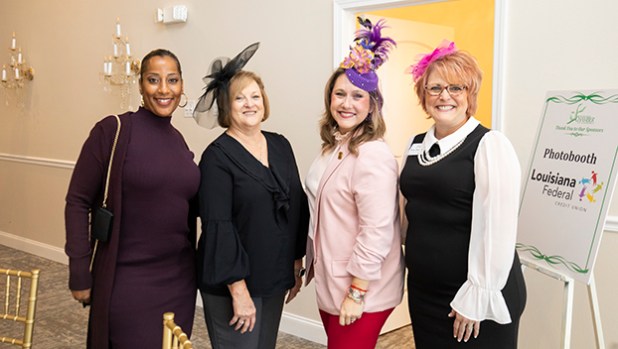 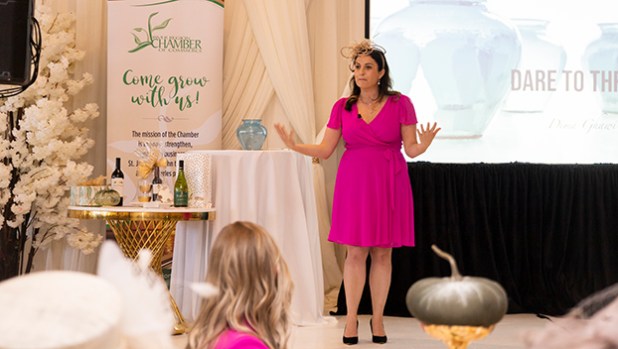 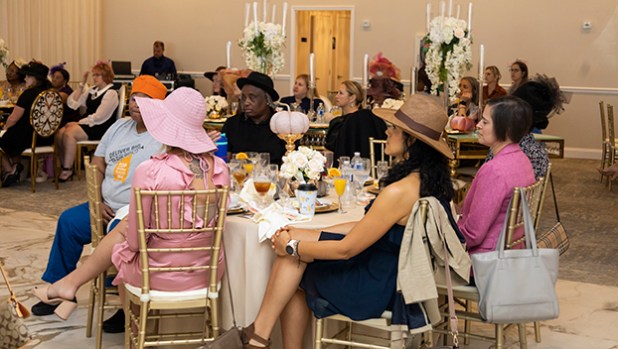 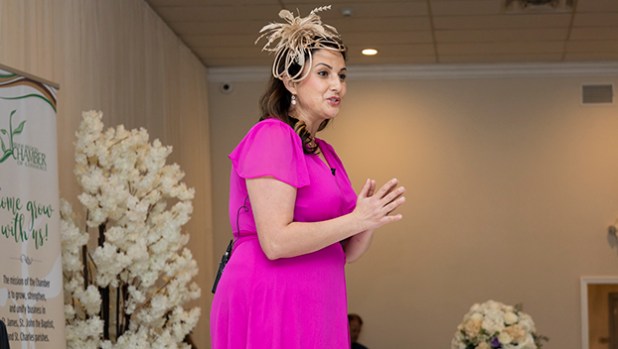 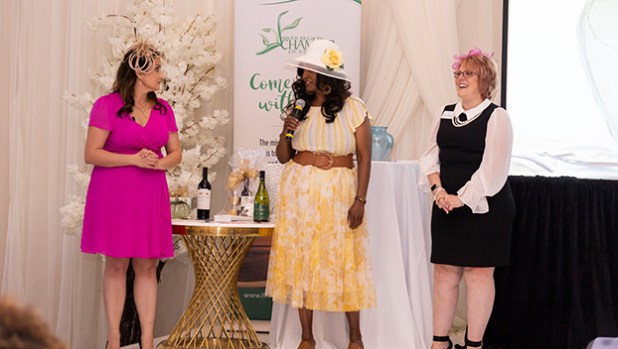 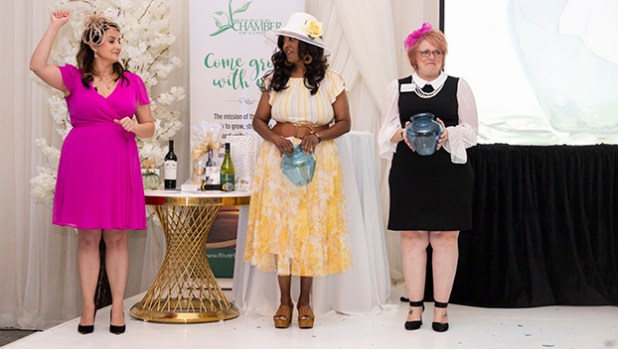 LULING — Attendees learned to shatter expectations and embrace the beauty in their cracks during the Rive Region Chamber of Commerce’s annual Women’s Empowerment event, recently hosted at Legacy Venue and Restaurant in Luling.

Shards of glass from three Hollywood-style breakaway vases dotted the stage by the end of the event, a visual example of what it means to let go of fear and embrace individuality.

Ghawi, a resident of Southeast Louisiana, is Middle Eastern in her genes and a global citizen in spirit. Her life’s mission is to enable individuals across cultures to shatter their internal and external limitations while using her own experiences to inspire, educate and empower others to rise in leadership.

Ghawi was exposed to the symbolism of the glass vase at an early age while growing up in Jordan. Her grandmother used it to remind her of the strict expectations of the culture; a pristine glass vase represented a perfect reputation, while a broken vase was considered irreparable and would be swiftly tossed into the trash.

In Jordanian culture, marriage was prioritized above getting an education. Ghawi yearned to be the first woman in her family to complete her bachelor’s degree even as she followed the expected path of getting married at a young age. Once she and her husband moved to the United States and settled in San Diego, the fairytale life she’d imagined turned into a nightmare. Her marriage was far from a partnership, and every aspect of her life was controlled down to how many minutes a week she could spend on the phone with her mother.

“I was 25 years old, and I felt like my life was over…That was the day that I had to learn on my own that I had a choice. I could either continue to live satisfying everyone around me, or I could live for me,” Ghawi said. “I chose me. I packed, and I left. I went to bed that night knowing I had cracked the vase, and as terrified as I was, I also knew I had made the right choice.”

In Ghawi’s culture, the repercussions of leaving a marriage were harsh. She was disowned by her entire community, and her father’s bruised ego led him on a hunt to have her killed. That spiraled into him threatening to kill her mother and younger sister, forcing both to flee to the United States to escape the cycle of abuse and start a new life.

Ghawi jokes that she was the only person excited when international travel was shut down during the COVID-19 pandemic. Even after 20 years, she can never feel 100% safe, but she learned long ago to make peace with the situation.

The ending of the only reality she had ever known turned out to be the beginning of a new journey to self-discovery. A career with IBM allowed her to travel the world and share her story, which paved the way for her to begin her own leadership coaching business.

Along the way, she learned a new perspective to the story of the glass vase. In Japan, instead of throwing away cracked vases like her grandmother warned her, Ghawi learned a new custom to bring the pieces together again with gold, silver and platinum fillings. The vases, once broken, were now considered more valuable than ever.

According to Ghawi, all it takes to embrace your cracks is a vision to change your life and the courage to keep moving forward.

“Any time someone judges you, I want you to think about the beautiful pottery in Japan. Those cracks are what make you beautiful,” Ghawi said.

She reminded the audience, “Feel the fear and take action anyway. Don’t be uncomfortable speaking up and adding value.”

Ghawi invited guests to come up on stage and shatter their own vases, whether that vase represented feelings of self-doubt or fear of a new beginning.

“If you have a dream and you don’t execute it, it will become your nightmare, because before you know it, you’ll wake up old and realize it was just a dream,” Lockett said. “Be empowered and embrace each other. Women are powerful. Even if we are in the same business, embrace each other, because I always say there’s room for all of us at the table to eat and eat well.”

Before leaving the Women’s Empowerment event, ladies were encouraged to take kindness cards to uplift others.