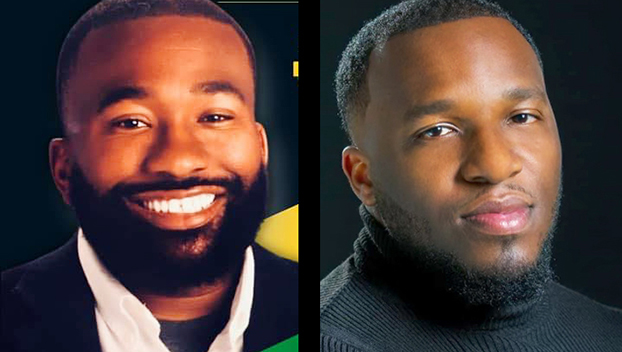 Pictured from left to right are Samuel Mamou and Akeem Burl. Mamou has been elected to the St. John Parish School Board to represent District 7.

LAPLACE — Before St. John the Baptist Parish voters made their voices heard in the November 8 School Board election, candidates Samuel Mamou and Akeem Burl knew District 7 would be in good hands regardless of the outcome.

Both men ran a clean race, knowing they shared a community-focused mindset and had the best interest of the children at heart. Burl and Mamou have a lot in common, both being natives of Garyville and alumni of East St. John High School now in their early 30s. Both have taken a vested interest in the local youth — Mamou as a New Wine Christian Fellowship volunteer & relief coordinator/ director of the Kids on the Move Summer Camp, and Burl through his work as a former advocate supervisor for Child Advocacy Services and current role as a juvenile compliance officer in the 29th Judicial District Court.

The night of the November 8 election, Burl and Mamou had something else in common. They each checked the election results to find they had won the District 7 School Board seat by a narrow margin. When results were initially posted to the Louisiana Secretary of State’s website, Burl was shown to have won by nine votes. Mamou congratulated him, but they were both in for a rollercoaster of emotions when the website was updated later that night. The updated results showed that Mamou had actually won with 51% of the turnout, 361 votes compared to Burl’s 353.

The change was not limited to District 7; the update caused the vote counts to rise in each of the St. John the Baptist Parish races.

“Looking at the numbers coming in, when the first report came out, I did notice that it looked like the early voting count was low. Later on, the early vote count was higher,” Mamou said. “People are focusing on our race, but what should be clarified across the board is that all of the races had votes that were not calculated.”

The St. John Clerk of Court and the St. John Registrar of Voters offices were unable to comment on the update in the vote count. L’OBSERVATEUR has reached out to the Louisiana Secretary of State’s Office and is awaiting a response.

Mamou asked the community to keep him and Burl in prayer in a call for unity over division.

“I’m pretty sure it has been a rollercoaster of emotions for both of us. We are both for unity in the community. There may have been some confusion with everything going on, but the goal for both of us is that the community’s interests are kept. At the end of the day, it’s not about me or anybody else. It’s all about the kids of our community,” Mamou said.

To Burl’s understanding, the initial results were impacted by a glitch with the machines and reporting. After seeing the official results, Burl wished Mamou success in his endeavors on the St. John School Board and reminded him that he is always one call away, ready to provide support when needed.

“It was a clean race. Sam and I are both community-driven with the goal of serving. Both of us are God-fearing and into church, so God was definitely a factor in this race,” Burl said. “It’s been a journey, and very exhausting. But the road doesn’t stop here for me. I will continue to serve children and families in whatever capacity that God leads me to.”

As a newly elected School Board prepares to take the reins in January, Mamou is most looking forward to change.

“I’m excited about getting to work and visiting every school in our district just to hear from the principals and the teachers directly about the most current needs in our parish for our students,” he said. “That’s my concern, really hitting the ground running to see what’s needed. I’m excited for us to rise as a district again.”

Come January, there will be several new faces joining the School Board.

Incumbents in three other districts were defeated in the November 8 election. Patricia “Momma Cat” Triche will take over Gerald Keller’s District 3 seat. Jennifer Frizzell defeated Keith Jones in District 6, and Lindsey Vicknair will now hold the District 11 seat that has for many years been filled by Clarence Triche.

Incumbents Albert “Ali” Burl III (District 2), Sherry DeFrancesch (District 5), and Nia Mitchell-Williams (District 10) were re-elected. Also rejoining the School Board for the next four years are Charo Bossier-Holden, Debbie Schum and Shawn Wallace, all uncontested in this year’s election.