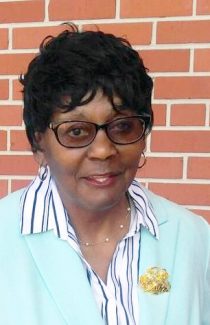 daughter, Sceola Marion Taylor.  She joined siblings Josephine and Carrie Mae.  Later siblings Herbert, Serenia, and Joseph would completed this family unit.  Sceola grew up in St Rose, LA  and attended St. Charles parish public schools.   She would excel in her studies and played the clarinet in the school band.

Life would not be easy after the death of her mother.  In spite, Sceola graduated from Bethune High School with the class of 1958.  Educator Susie B. Charles (her godmother) and others played a prominent role in fostering Sceola throughout her young adulthood.   Immediately upon graduation, Sceola opted for life as a wife and mother.  On November 28, 1958 she married Preston Turley, Jr. and to this union five children were born.

She was baptized at the Mount Zion B. C. in the summer of 1960 along with 44 other souls.  Sceola dedicated her life to serving the Lord as an Usher.  Her favorite songs were “Precious Lord, Take My Hand” and “No Charge” by Shirley Caesar.   She saw to it that her children were reared in a Christian home.  Sceola was just as determined that all of her children would be spiritually rooted and grounded as well as educationally focused.

In addition, she was affiliated with the Fraternal Order #19 Eastern Stars.  Sceola was a hard worker at home (cooking, sewing, cleaning and tending to the needs of her growing family all the while maintaining full-time jobs.  She worked as a cashier at Mattingly’s  Drugstore on Canal Street in New Orleans and later at B&C Supermarket in Kenner, LA where she formed a lasting friendship with Mary Lyons up until her death.   Eventually, Sceola would land her dream job with Delta Airlines and would provide 20 years of service.  This opportunity allowed her to pursue her passion to travel extensively within the U.S. and abroad.

After retirement from Delta Airlines, Sceola became a paraprofessional in the St. Charles Parish school system.  She enjoyed teaching and exposing others to opportunities not otherwise available.  She was active in the ministry at Mt. Zion and would routinely plan activities and outings for the adults and children.  Once she orchestrated an airplane excursion to Houston, TX and a train ride to Birmingham, AL for many who had never traveled by train or plane.   In July 2009, she and Preston moved to Houston TX where she became ambassador for her retirement community and was a member of the New Beginning B.C. in League City, TX.  She impacted many lives in whatever capacity she served.