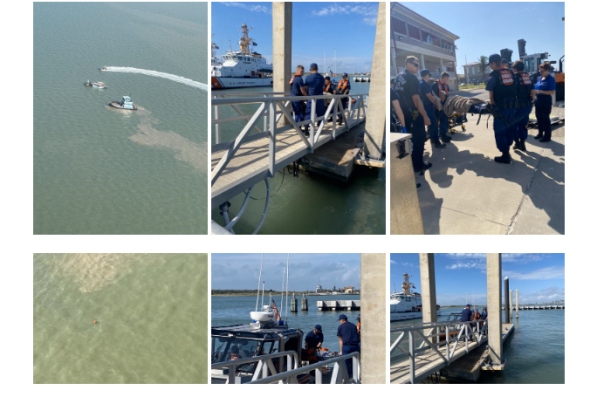 Coast Guard Sector Houston-Galveston command center watchstanders received a report at 9:25 a.m. from the crew of the Master Dylan, a dredge barge, of three people in the water near a 25-foot oyster boat that had caught fire in Galveston Bay. The dredge barge crew safely removed all three people from the water. The boater’s injuries reportedly included a broken leg, severe burns and smoke inhalation.

Once on scene, the RB–S crew took aboard the three boaters and transported them to Station Galveston, where emergency medical services personnel were waiting to transport them to the University of Texas Medical Branch Galveston.

The 25-foot oyster boat sank outside the ship channel; the crew of the Master Dylan marked the location with a red buoy. The oyster boat’s owner will arrange for its salvage.

The cause of the fire is under investigation.

“We applaud the crew of the Master Dylan for quickly rendering assistance and alerting us to the emergency,” said Petty Officer 2nd Class Brandon Smith, Sector Houston-Galveston. “We remind all mariners to stay vigilant while out on the water because you never know when someone may be in need of assistance.”