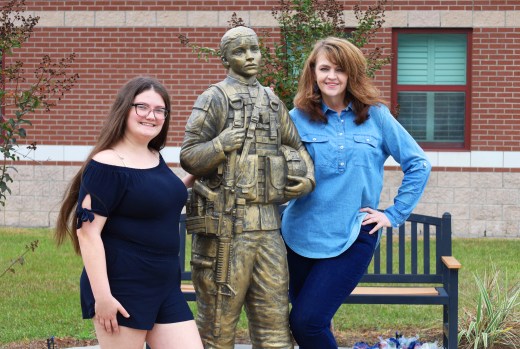 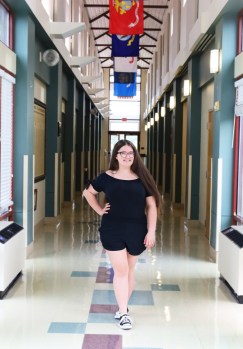 Brooke Madere is a frequent volunteer at the Southeast Louisiana Veterans Home in Reserve.

RESERVE — Brooke Madere has always had a special connection with veterans. Now in her senior year at East St. John High School, Madere is taking her volunteerism to the next level by coordinating a Christmas drive for the residents of the Southeast Louisiana Veterans Home in Reserve.

By gathering items reminiscent of the comforts of home, Madere hopes to remind the veterans who may feel alone during the holidays that they are always surrounded by family at the Southeast Louisiana Veterans Home.

Madere began visiting the Veterans Home at 15 years old to spend more time with her great-grandfather, a resident at the time. After meeting Activities Director Sonya Hebert, Madere became more involved with coordinating exercise, arts and crafts, and other programs for the veterans.

“I really enjoyed being there and being able to help the veterans. They are so different from our generation,” Madere said. “People now want new this, new that, new everything. The veterans are more sentimental. They will sit down with you and tell you stories about how they were in the different wars. You look and them, and then you look at us, and you just wonder how it changed.”

A temporary move to Missouri and the COVID-19 pandemic kept Madere from the Veterans Home for a while. Once she was back in town and restrictions were lifted, she was quickly drawn back.

“It’s been an amazing experience, and I just thought that now that I have my own job and the little money that I’ve made, I’m able to do things more independently, and I want to give back to them,” Madere said.

Madere is collecting materials for four baskets through a combination of her own funds, community donations and business sponsorships. One of her baskets will be filled with coffee creamers, cups and sugars. Another will have bags of candy and some hygiene items such as toothpaste and toothbrushes. One basket will be strictly for residents with dementia and include items such as the balloons the Veterans Home staff uses during guided exercise activities. The last basket will be filled with items for leisure, including but not limited to word searches, coloring books, crayons and journals.

Madere is reaching out to Walmart to see about including soft blankets for the veterans. She is also designing T-shirts for the residents featuring the five branches of the U.S. Military, and she hopes to provide sack lunches when she distributes the items during Christmas Break.

“I talked to the Kiwanis Club, and they suggested maybe doing bingo with them while everything is being passed out to relieve the staff so they can get lunch, too. I plan on bringing finger sandwiches and a fruit tray,” Madere said.

Sonya Hebert, an employee at the Southeast Louisiana Veterans Home, has only seen one other teenager dedicate themselves to the veterans to the extent that Madere has. The last young person to be so deeply involved with volunteering was James Perrilloux, a former Riverside Academy student and Young Marine who went on to graduate from the United States Military Academy at West Point in 2021.

From the time Madere first started volunteering around 2018, Hebert has been impressed by the way she carries herself.

“She was a little girl then, but she was like a grown person, always helping with games, projects and arts and crafts. It evolved into her being a full-time volunteer during the summer time. She always had a great affection and love for the veterans,” Hebert said. “We couldn’t be more excited about her being back. She’s a fine example of what a young person should be doing for these veterans who live right in her backyard.”

Her father, Charles Madere, said she has always had a huge heart and a willingness to take care of others. It makes him feel guilty knowing the burden that was on her to take care of the family from the time she was only 14 or 15 years old.

“When I got sick in 2018, I had open heart surgery, and four days later had to have another one because I caught a stroke. I came out of it, and my ex-wife took off when I was sick. Brooke stood by me when nobody else did. She has kind of been head of the household,” Charles Madere said. “She’s the bricks that holds the family together.”

Wise beyond her years, Brooke Madere also helps her father run his trucking business — and she has no problem with alerting him when she feels he is going over budget. However, she sees her future not in business, but in nursing, where she will be able to continue taking care of others.
“I’m taking a CNA class right now at East St. John, and I want to go to River Parishes Community College to become a licensed practical nurse. I’m going to try to get a job at the Veterans Home,” Madere said.

To get in touch with Madere to contribute donations or funds to the Christmas supply drive, please email brooke.robichaux@lobservateur.com.