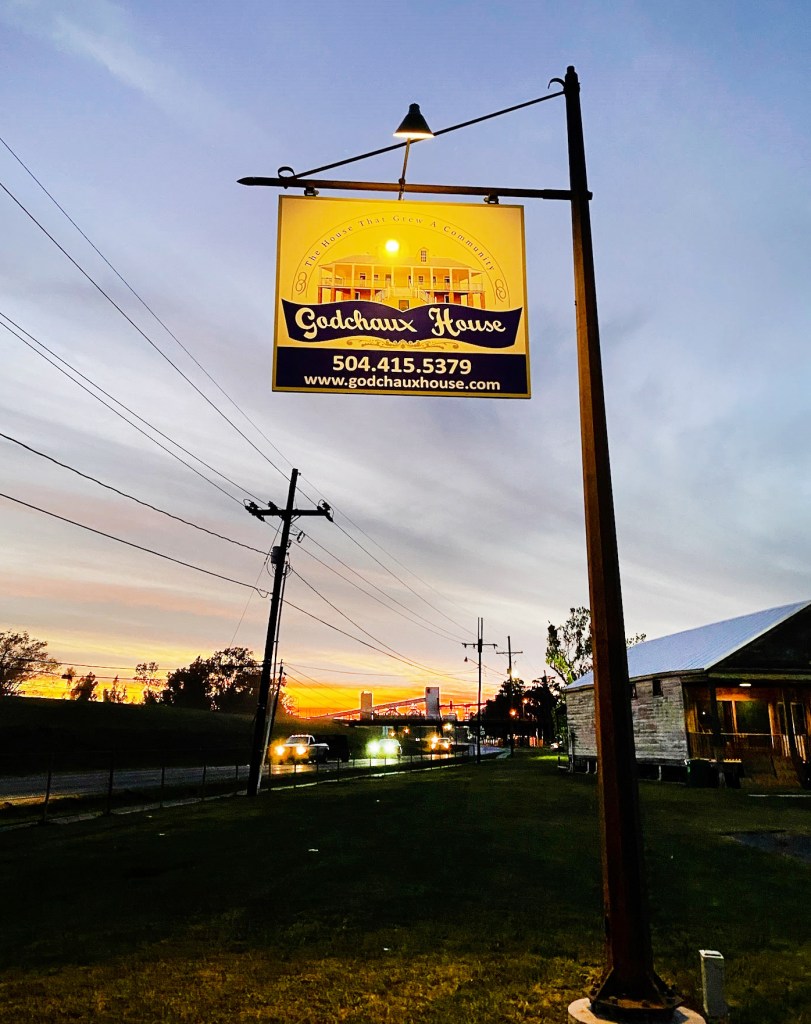 The Godchaux House Historical Society is back up with lights in Reserve, a sign of recovery post-Hurricane Ida.

and His Jewish Roots.”

The Godchaux House Historical Society invites the public to a book signing event with Wolf beginning at noon November 19 at the Haik Store, located at 1628 Highway 44 in Reserve.

Gumbo and jambalaya will be sold (to-go or dine-in).

Funds from food sales will support the continued restoration of the Godchaux-Reserve Historic House, according to the Godchaux House Historical Society Board of Directors.’’ Work is continuing on the house despite setbacks from Hurricane Ida, which significantly damaged the roof and exterior of the historic house.

The book signing marks the Historical Society’s first event since Hurricane Ida, and more events are planned for the near future.

“This is Peter’s first stop on his book signing tour, we are very excited to host this event,” The Board of Directors shared in a statement earlier this week.

Wolf’s “The Sugar King” follows the story of Leon Godchaux, beginning when he was a penniless, illiterate Jewish 13-year-old from France crossing the Atlantic alone. Landing in raucous and polyglot New Orleans in 1837, the third largest city in America, he starts out as a peddler of notions to plantations along the Mississippi. He remains unable to read or to write in English or in French his entire life. Nevertheless, by the end of his intrigue-filled life, Leon Godchaux is known as the “Sugar King of Louisiana,” the owner of 14 plantations, the largest sugar producer in the region and the top taxpayer in the state.

He refuses to enter the sugar business until the end of slavery. Unsympathetic to the Lost Cause, caught up in the Civil War, and negotiating Reconstruction and Jim Crow, Godchaux simultaneously builds an esteemed New Orleans clothing empire, relying on the accomplishments of two Black men. Joachim Tassin, a slave whose birth status both men conceal, is entwined with Godchaux in his clothing business, and Norbert Rillieux is a free man of color whose overlooked ingenious invention enables Leon Godchaux to build his sugar empire.

Nicholas B. Lemann, an author, New Orleans native and New Yorker staff writer, shared the following review: “Peter Wolf’s The Sugar King is a remarkable, vivid and meticulously researched story about an unjustly forgotten major figure of the 19th Century” Wolf’s great-great-grandfather, Leon Godchaux. The story of Godchaux’s rise from penniless, illiterate teenage immigrant to tycoon in two unrelated businesses, retailing and sugar, would be implausible if it weren’t true – and so would the story that Wolf has unearthed about Godchaux’s unlikely lifelong friendship and business partnership, across Louisiana’s racial divide, with Joachim Tassin, a Black man born enslaved.”

“The Sugar King” was released November 1, 2022 and is currently available in hardcover and e-book version at OctaviaBooks.com, IndieBound.org or Amazon. For more information visit www.petermwolf.com.