LAPLACE — A controversial proposal to sequester carbon dioxide under Lake Maurepas drew vocal opposition from area residents during the most recent meeting of the St. John the Baptist Council meeting.

Representatives of Air Products, a company based in Allentown, Pennsylvania, had been asked by Parish President Jaclyn Hotard to deliver a presentation on the project, which has also encountered widespread opposition in Livingston and Tangipahoa parishes.

“I am extremely concerned as to why there is not a greater importance being placed on Lake Maurepas,” Hotard said, adding she was also concerned about the manner in which Air Products has operated.

She believes the company has not been transparent or forthcoming on informing the public of its plans for the project, the bulk of which will affect waters in St. John the Baptist Parish.

Approximately 20,300 acres of Lake Maurepas are located in St. John and another 20,000 in Livingston Parish, with only 800 acres in Tangipahoa Parish

Air Products employs about 350 people at its 18 Louisiana facilities along the Mississippi River, including a plant in Garyville.

The company is planning to build a blue hydrogen plant in Sorrento with CO2 a part of the process. Rather than having it emit into the air, Air Products is proposing to transport the CO2 to Lake Maurepas via 37 miles of what would be new pipeline.

Much of the discussion was focused on why Lake Maurepas was chosen rather than the floor of the Gulf of Mexico, which is much deeper. Air Products lead geologist Mariel Schottenfeld listed several reasons, including only 37 miles of pipeline would have to be put down rather than 150 if going to the gulf, less wetland impact, no coastal erosion, excellent geology, fewer old or abandoned gas wells, no salt domes and few geological faults.

“We felt (the carbon dioxide) could be safely sequestered for geological purposes (in Lake Maurepas),” Schottenfeld said, adding that additional sites were also evaluated.

Connolly said seismic testing will soon begin in the lake, an undertaking that will include 17,000 charges being placed 60 feet under the surface of the lake. The testing will provide 3D images of the lake that will ultimately determine if the project is able to move forward.

A permit for the first test well, which will be located in St. John waters, is awaiting approval from the Corps of Engineers.

Seismic contractor Aaron Totten, who is consulting with Air Products, said he does not believe the testing will adversely affect aquatic life.

Plans call for 12 to 16 wells to be drilled, which will be cut off and capped at the end of the 25-year project. Connelly said the platforms should enhance aquatic life in the lake, including reefs for fish.

“I think the fish have been doing pretty well for all of these years,” Councilman Lennix Madere said. “That is a non-factor.”

Of the many residents who spoke out against the project, George Handy, a member of Concerned Citizens of St. John, was the only St. John resident to speak, excluding council members, who had plenty to say. Hardy stressed the dangers of the project, citing a number of potential threats, and also touched on the human rights component, saying that historically chemical plants and similar facilities are built near minority neighborhoods.

“It’s about tax breaks and profit, neglecting the people you are sworn to protect,” Handy told council members.

Council members peppered company representatives with a multitude of questions, including environmental concerns, air and water quality and the potential devastating effect to the seafood industry. Lake Maurepas is home to many commercial crabbers and fishermen whose livelihood is on the lake.

“I don’t think the project will be a benefit to our community, residents and our lifestyle, especially with the seafood industry,” said Councilwoman Tammy Houston, perhaps the most outspoken of council members. “You have gone to other communities and met with opposition so you want to bring it here.”

Madere echoed Houston, saying he does not believe there is a benefit to the St. John community.

“It doesn’t look good for you,” Madere said.

Councilman Warren Torres expressed concern for the Laplace drinking water, which is transported 13 miles from Ruddock. He said an explosion or any other event at one of the Air Products wells could compromise Laplace’s drinking water.

“It that happens we are in deep trouble,” Torres said.

Air Products officials explained monitoring systems will be in place and in an emergency the well would be cut off, with the hope of minimizing the effects.

Southeastern Louisiana University’s Biology Department will serve as an independent monitor from the beginning of the process through the project’s end in 25 years.

Air Products recently completed the permitting process for seismic testing, expected to take place this month following a public demonstration (date to be announced). The expected completion date for the blue hydrogen plant is mid-2026, which is when carbon dioxide will be transferred to Lake Maurepas if it is determined to be a suitable sequestration site.

More information on this project can be found in the October 29 Saturday e-edition story, “Seismic activity planned for Lake Maurepas; Air Products addresses concerns” at lobservateur.com. 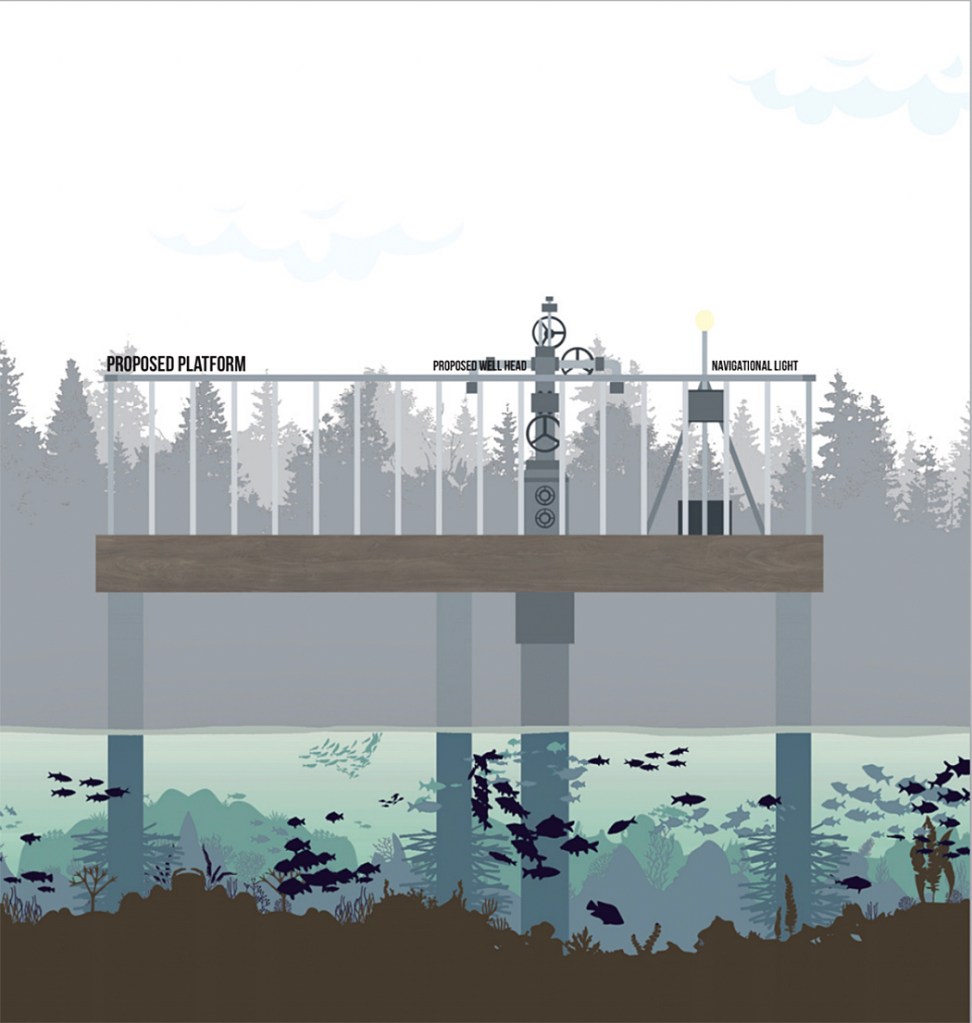 A conceptual rendering of the Lake Maurepas monitoring well is pictured. 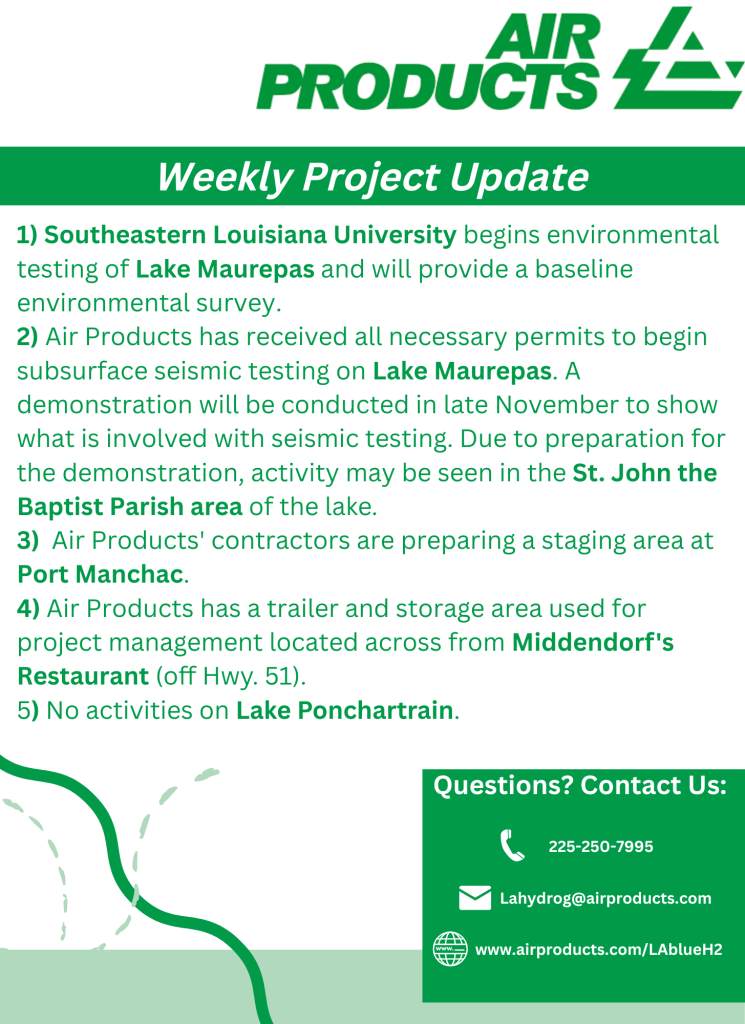