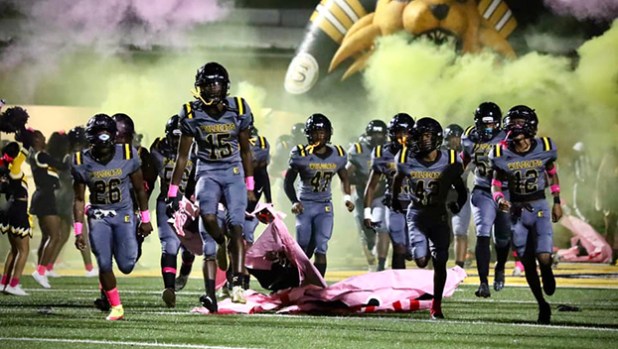 The East St. John Wildcats run onto the field during the Week Nine "pink out" game against Destrehan. 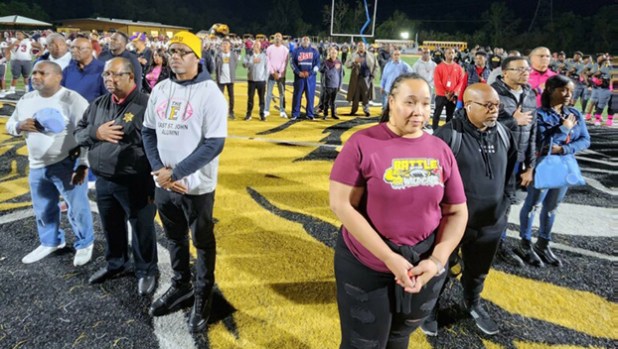 Pastors from St. John the Baptist and St. Charles parishes come together for a moment of unity on the field during the Destrehan/ East St. John football game. 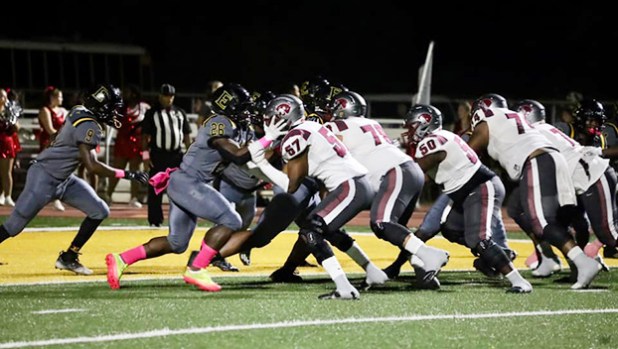 RESERVE — A highly-anticipated showdown of the undefeated Wildcats ended in an overwhelming victory for Destrehan last Friday at Joe Keller Stadium in Reserve.

Destrehan cruised to a 48-7 victory after scoring all seven touchdowns in the first half of the game. The unstoppable Fighting Wildcats defense has given up only 34 points all season, while the offense has tallied an astonishing 409 points with one game left to go in the regular season.

Within the first minutes of the game, Destrehan’s Shane Lee helped set up a 22-yard touchdown run from Jai Eugene Jr., a Tulane commit. Andrew Schafer picked a pass and returned it more than 50 yards, landing at East St. John’s two-yard line. Lee brought it in to make the score 14-0. Destrehan soon increased its lead to 21-0 as Eugene made a 57-yard touchdown pass to Brandon Freeman.

East St. John scored its only touchdown in the first quarter as Yashua Mitchell and Koyal Gray connected on a touchdown pass. Destrehan answered quickly with another drive down the field, leaving the score at 28-7 at the end of the first.

Destrehan coach Marcus Scott knew the Fighting Wildcats had a chance to be productive this year before the season had even started. The team returned a lot of experience on the defensive side in the secondary after going 6-0 in the regular season in 2021 and ultimately falling to state champion Zachary in the semifinals.

Destrehan is currently the only undefeated team in the River Parishes with a 9-0 record. This week’s home game against Thibodaux (4-5) is final hurdle of the regular season.

East St. John, Lutcher, St. James and Riverside Academy each hold a respectable 8-1 record heading into Week 10 of the season.

East St. John Coach Brandon Brown is proud to continue building the program brick-by-brick in what has proven to be a bounce-back year following last year’s 3-4 finish in the wake of Ida. The Mighty Wildcats will host Holy Cross (2-7) this Friday in a non-district match.

Despite the competition between the two Wildcats teams, Friday’s game started with a show of unity as pastors and ministers from St. John and St. Charles parishes gathered together for a prayer on the field. Min. Carolyn Brown led the invocation in honor of her husband, the late Rev. Donald Brown.