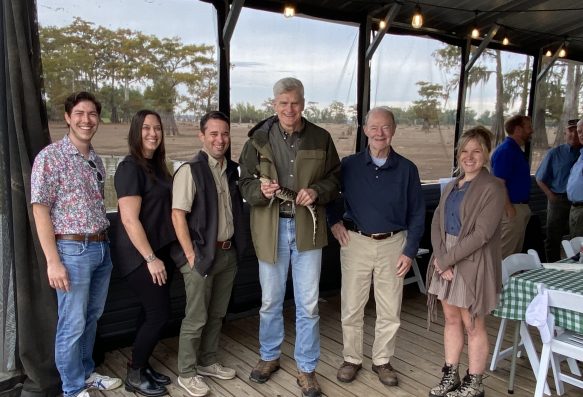 LAFAYETTE –  U.S. Senator Bill Cassidy, M.D. (R-LA) was given a tour of part of the Atchafalaya Swamp by Louisiana Swamp Base, Inc.

Together with their partner McGee’s Swamp Tours, Louisiana Swamp Base is a national conservation and high adventure recreation program created in 2010 by the Evangeline Area Council of the Boy Scouts of America. They sponsor programs, educational outreach and public tours that support tourism, promote Louisiana and educate young people about Louisiana’s natural environment. Among other programs, they allow youth to participate in 60+ mile adventure paddling treks through the Atchafalaya Basin.

“The beauty of Louisiana is often hidden behind levees,” said Dr. Cassidy. “The Swamp Base takes people into the Atchafalaya Basin to experience the beauty of our outdoors.”

Cassidy has been an advocate for the Atchafalaya Basin, and secured nearly $20 million from the Infrastructure Investment and Jobs Act in January to repair levee slides, replace levee surfacing and dredge shoaling at key points in the basin, as well as to build the Bayou Sale East-West tie-in. Additional dollars from disaster relief passed in September 2021 devoted over $77 million to build the Atchafalaya Basin floodway system, and another $85 million to complete the Charenton Floodgate, among other projects.

“It was a pleasure to meet with Senator Bill Cassidy today to share with him our future plans to develop an outdoor education and adventure center in the Atchafalaya Basin, along with the positive impacts that the Swamp Base program is making on Louisiana,” said Mr. Pierce. “We look forward to working with the Senator as he continues to prioritize ways for schools to engage in and celebrate our state’s natural areas.”