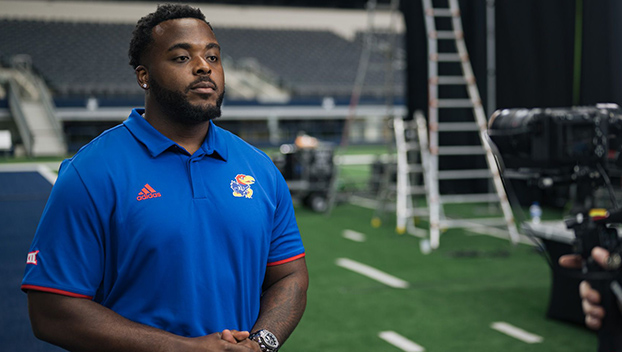 Caleb Sampson, a native of St. Rose, is receiving recognition in the collegiate football world as a Big 12 Champion for Life.

ST. ROSE — Caleb Sampson Jr., a defensive lineman for The University of Kansas and St. Rose native, was named a Big 12 Champion for Life. His story is featured on the Big 12’s social channels and will be played in-stadium during the season.

Sampson has always had a passion for football. Sampson, now a captain in his junior campaign, is grateful for the opportunity to even be on the field and is now using his platform to encourage kids going through their own challenges to continue to strive to reach their goals.

Now in its eighth season, Big 12 Champions for Life has featured the life-changing stories of nearly 400 student-athletes and university alumni. The young men and women who have earned a scholarship to compete in their chosen sports embody the defining characteristics of a champion: leadership, perseverance, community service and discipline.

“I remember when I first sent my dad a picture of my degree, he said he cried. It’s a big deal for my family, just because they see I’m on the right path, and I’m trying to do better for myself and for them,” Sampson said. “It’s important for me to show other Black student-athletes that you have power and you have influence.  It’s just up to you to go and do it. I feel like that’s the most important thing that I’ve learned.”

“Caleb has gone through a good share. He’s from Louisiana; his family has gone through a few hurricanes. But he’s not one to make excuses for anything that has been tough to overcome, because he just goes about it in a steady, mature way,” Leipold said. “He’s handled changes in his life, and uses them as well as anyone I have ever seen as far as growing opportunities. He’s just a great example. He doesn’t say a lot, but when he does, it’s well respected, it’s heard.”

At Northlake Christian High School, Sampson had 31 tackles during his senior year in 2016, including 2.5 quarterback sacks. By his sophomore year in college, he was on the field for all 12 of Kansas University’s games.

Now in his senior year with the Jayhawks, Sampson has recorded 11 tackles, two sacks, and has broken up pass attempts against Houston and TCU.

New stories from student-athletes representing each of the conference’s 10 universities will be shared throughout the 2022-23 academic year. For more information visit the Champions for Life section at Big12Sports.com