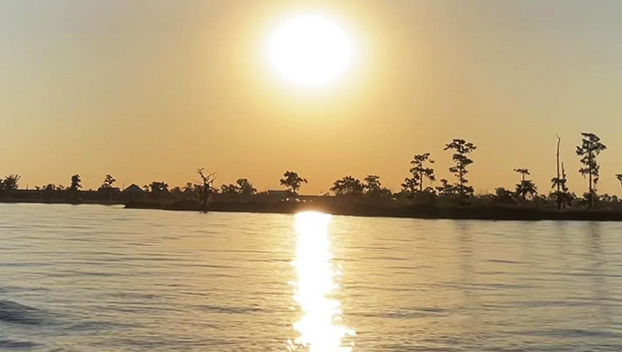 The results of a seismic survey will determine whether Lake Maurepas will be used for a carbon sequestration project as Air Products moves forward with construction of a blue hydrogen complex in Ascension Parish.

MANCHAC — John Hoover was only 2 years old the first time he walked along the lakeshore at low tide. From the moment the water and mud soaked between his toes, he felt a calling to the water that led to a career as a commercial fisherman.

Hoover built the property he plans on using as his retirement home on the edge of Lake Maurepas. To those who use the lake recreationally and commercially, it’s not only a body of water but a source of livelihood. That’s why he and others in the three parishes bordering Lake Maurepas have been vocal in their concerns over upcoming seismic work.

Lake Maurepas has been identified as an ideal site to sequester CO2, but experts must first conduct seismic surveys to gain a full understanding of the geology and determine whether or not to move forward with sequestration in this location.

Air Products recently acquired all necessary permits to conduct the seismic survey. This includes joint permit approval via the Office of Coastal Management and the U.S. Army Corps of Engineers. Exoduas Inc., the company contracted by Air Products to conduct seismic activity in Lake Maurepas, was also required to obtain a permit through the Department of Wildlife and Fisheries.

After working in blue crab fisheries for more than 30 years, Hoover questions impact seismic activity will have on marine life, particularly the mid-October and November migration of blue crabs from Lake Pontchartrain to Lake Maurepas. He wonders what will happen to the rangia clams burrowed at the bottom of the lake, unable to move to safety if their habitat is disturbed.

“I’ve been born and raised in that water my whole life. It’s in my DNA. It’s my passion. It’s what I was born to do, so I have a lot of fears and concerns about this project that we have in the making,” Hoover said.

This week, representatives from Air Products spoke during the St. John the Baptist Parish Council meeting and stopped by L’OBSERVATEUR’s office in LaPlace to answer questions and provide more insight on the seismic survey.

According to the Air Products team, Lake Maurepas is considered one of the best areas in Louisiana to permanently sequester carbon due to its thick caprock layer, lack of major faults, and limited number of existing oil and gas wells. When compared to the Gulf Coast, Lake Maurepas allows for a shorter pipeline for carbon sequestration with less impact to wetlands and no coastal erosion.

“We’re not talking about caverns or a salt dome. Take a handful of sand, and it’s the little spaces in between,” Schottenfeld said. “There’s about a 2000’-foot column of sand under Lake Maurepas about a mile down. There’s 2,000 feet of impermeable rock where CO2 can’t get through. There’s another layer of impermeable rock so CO2 can’t go up or down.”

Schottenfeld said it’s critical that the underground source of drinking water is protected. The water table for Lake Maurepas goes about 3,400 feet deep, and it is completely protected by the impermeable layers of rock.

“So far, we do believe that Lake Maurepas has some faults in the middle, but we believe that we also have enough information to tell us there should be room around those faults so wherever we might inject, the CO2 would never approach them,” she said. “That’s one of the reasons for the seismic survey. We need to do that first to know exactly where those faults are so that we can always stay away from them.”

A test well is also planned for St. John Parish waters to take samples from the reservoir. The data collected from the test well will be used in conjunction with data from 3D maps generated via seismic testing.

What steps are involved in this process?

The seismic survey is projected to begin in mid-to-late November. An exact date will be announced soon.

Seismic testing will include 17,000 charges being placed 60 feet under the surface of the lake.

Schottenfeld said the testing will occur in six patches to minimize disruption, meaning 5/6 of the lake will be fully open at all times. No part of the lake will be shut down during the duration of the project; however, there will be poles spaced between 110 and 220 feet in the area being worked on, and boaters will be asked to travel slower through the area. There will be a 300-foot open boat lane forming a kite-shaped pattern around the lake through the duration of the project.

Testing for each of the six patches is conservatively estimated to take about a month, which includes about five days of test shots per patch. Individuals will need to stay 1,000 feet away when the test shots are fired.

If Lake Maurepas is determined to be a good fit for CO2 sequestration, injections would begin with the completion of the hydrogen plant in Sorrento around mid-2026.

What steps are being taken to minimize impacts?

Air Products has brought in independent scientists and experts from Southeastern Louisiana University to conduct soil, water and wildlife monitoring.

Kim Goslin, an environmental and capital projects permitting engineer for Air Products, said the team from SLU began conducting fieldwork this week to establish a baseline prior to any industrial activities. Real-time data will be made available to the public.

“We are bringing in SLU as an extra set of eyes to conduct biological monitoring of the flora and fauna. SLU has decades of research on Lake Maurepas, so they are able to go back and answer whether there have been any impacts (from previous seismic testing),” Goslin said. “Our contractor, Exoduas, is using Elos as an independent consultant for their work.”

Goslin added that Air Products and Exoduas will be following regulations under Wildlife & Fisheries to ensure minimal impacts to the environment.

Equipment will not be placed in areas near alligator nests and other habitats. Andrew Connolly, Air Products vice president and general manager, said the project is intended to enhance aquatic life in the lake with the addition of artificial reef environments.

According to Connolly, a public demonstration will take place in advance of the seismic testing to ensure locals have an understanding of the process.

Locals, particularly those who make a living off the lake, have continued to voice their fears.

“It all amounts to water quality and the overall health of our lakes as to whether these migrations happen,” Hoover said. “There are questions that can’t be answered because nothing has been done in this lake to this magnitude, and we don’t know what will happen. Frankly, Wildlife and Fisheries doesn’t know about crab migrations other than the normal cycle of life routine. They don’t know the things the fishermen have learned over the years from chasing this critter and understanding what makes them think and move.”

Who is liable for the project, during the process and after its completion?

James Forstall, a commercial fisherman, has lived near Lake Maurepas for more than 40 years. Still fresh in his memory are news reports of Bayou Corne residents being told to evacuate when an underground salt dome cavern operated by an oil industry collapsed in 2012.

“My biggest fear is the word ‘oops’,” Forstall said. “Only a few people live down here, and it would be nothing for them to say, ‘Oops, y’all have got to move.’ I see no benefit to it because all it takes is one accident. I don’t see how it benefits St. John Parish, Tangipahoa Parish or Livingston Parish at all.”

Residents also questioned who would maintain the wells after the lifespan of the project has ended.

Air Products is responsible for monitoring the wells before injection begins, through the roughly 25-year span of the sequestration project, and 50 years after the project’s completion. This amounts to roughly 76 years, and Air Products would lose permits and be responsible for repairs if anything were to go wrong.

Once the project ends, the 12 to 16 wells to be drilled will be cut off and capped. Air Products is also responsible for reporting to the EPA and verifying the integrity of the pore space 10 years after injections have ended.

“To be clear, when you stop injecting, the CO2 stops moving,” Goslin said. “We will have a tremendous amount of public data, collecting a terabyte per well per day. Even when it comes to existing wells that were drilled on the lake, we have to make sure that they were abandoned properly. If it looks like they are not up to the current standards of today, we close them out properly, so we protect the groundwater even more so and ensure that’s not a pathway for the CO2.”

Weekly updates will be shared on Air Products’ social media pages. Specific questions may be directed to lahydrog@airproducts.com. 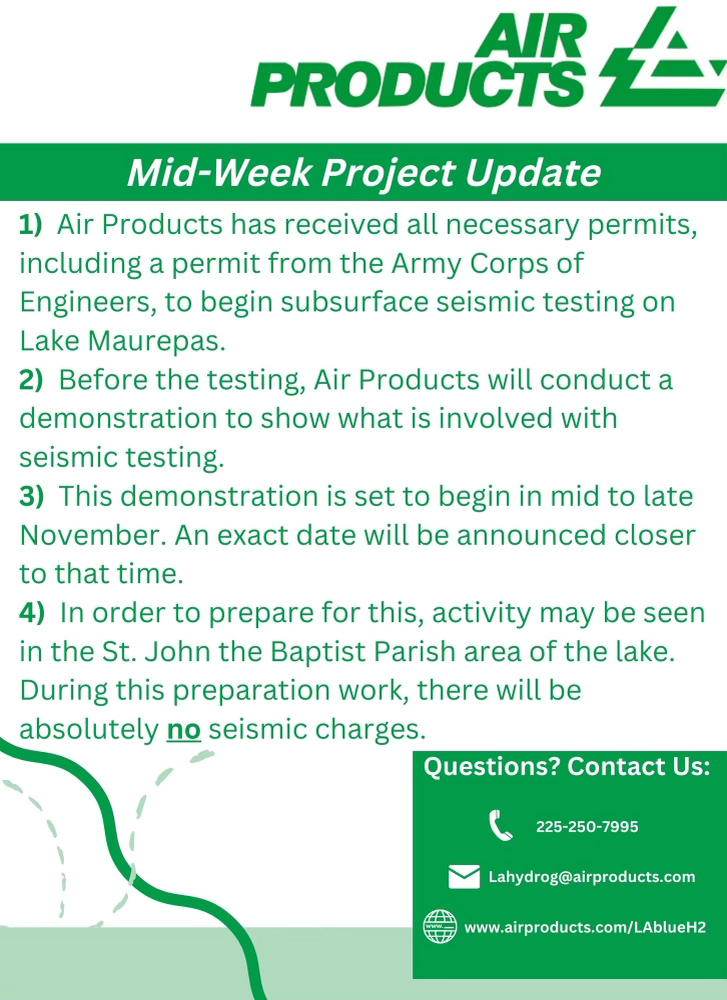