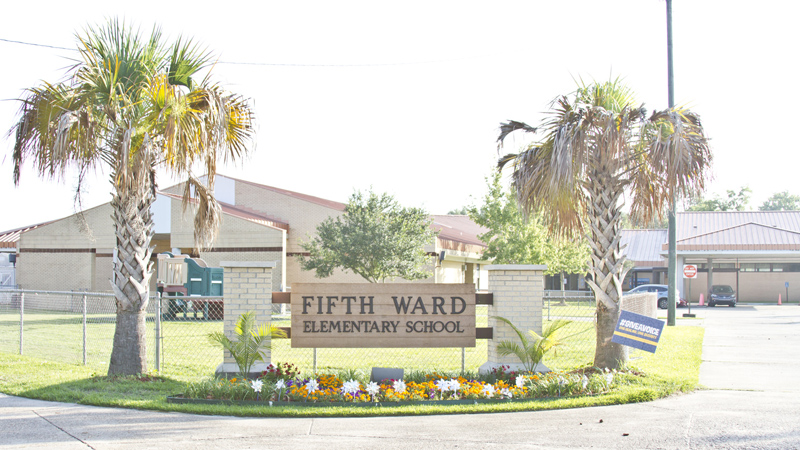 Fifth Ward Elementary is located at 158 Panther Drive in Reserve, less than a mile from the Denka Performance Elastomer facility.

RESERVE — Concerns surrounding increased cancer risk to children attending and residing near Fifth Ward Elementary School has once again been brought to the attention of the St. John the Baptist Parish School Board.

Now, the U.S. Environmental Protection Agency is calling for the Louisiana Department of Environmental Quality to immediately conduct additional air monitoring and determine a temporary host site for more than 300 students at Fifth Ward Elementary.

This week, Interim Superintendent Rebecca Johnson was made aware of a letter from the EPA’s Office of Environmental Justice and External Civil Rights. Addressed to the secretaries of LDEQ and the Louisiana Department of Health, the 56-page letter suggested the departments have allowed air pollution from the nearby Denka Performance Elastomer facility to put a predominantly Black community at risk of adverse health impacts.

Among the recommendations were for Fifth Ward elementary students to be moved to an appropriate location where recorded concentrations of chloroprene are less than 0.2 µg/m3.

Johnson acknowledged the letter at the end of a previously scheduled special School Board meeting Wednesday evening in Reserve. The majority of board members did not have an opportunity to review the 56-page letter before the meeting and were not aware of it at the time the agenda was set.

“The letter was not addressed to the school system or to a school board member. Therefore, at this time, we have not had an opportunity to receive and review this letter,” Johnson said. “With that being said, we recently signed an agreement with Denka to install additional EPA air monitoring equipment at the school site. Safety of students, staff and the community is our No. 1 priority, and steps that can be taken will be taken to ensure their safety.”

Copies of the letter were distributed to School Board members Wednesday, and further action has not been taken at this time. School Board President Nia Mitchell-Williams said she found out about the letter like everyone else, by seeing it reported on the news.

During a brief discussion at the end of Wednesday’s meeting, School Board member Debbie Schum asked about sending a letter to the Department of Health to ask about their recommendations on how to proceed.

School Board member Patrick Sanders, who is not running for re-election and will end his term in December, said the EPA’s letter contained very valuable information regarding experts’ understanding of the impact of chloroprene exposure.

He told fellow School Board members, “Even if you don’t read all 56 pages, go to the area about what happens in the lifespan of a child over 70 years. I’m a cancer survivor, so it’s very interesting.”

An excerpt from the EPA’s letter reads: “As explained in more detail below, individuals exposed to mutagenic carcinogens such as chloroprene starting in early life as infants and children are understood to be more susceptible than individuals exposed only as adults. As a result, adolescents and adults who spent their infancy and childhood in this community and who breathed chloroprene at levels measured near Denka, surpass a 100-in-1 million estimated lifetime cancer risk more quickly than an adult without childhood exposure to chloroprene.”

Sanders also called for the executive committee to get together to start looking into options.

Chloroprene was first identified by the EPA as a “likely human carcinogen” in 2010. Denka Performance Elastomer, located within a mile from Fifth Ward Elementary in Reserve, has maintained that there is no evidence of increased health risk near the plant.

According to spokesperson Jim Harris, data compiled by the Louisiana Tumor Registry has repeatedly shown no widespread, elevated risk of cancer in St. John the Baptist Parish or areas neighboring the facility when compared to state averages.

According to Harris, St. John Parish “routinely ranks in line with or below the state’s averages for overall cancers and the types of cancer EPA suggested to be linked to chloroprene exposure.”

Over the past several years, Denka Performance Elastomer has pledged to “rely on the best available science” and to work toward identifying and investing in additional opportunities to further reduce emissions.

In June 2018, the Louisiana Department of Health issued a report in response to an inquiry from the St. John Parish School Board to assess the potential for reducing cancer risk by transferring children out of the Fifth Ward Elementary site. Based on air sampling conducted from March to May 2018, LDH concluded transferring students from Fifth Ward’s campus to another location within the community would “not greatly decrease” the theoretical risks of developing cancers related to chloroprene exposure.

In the letter released this week, the EPA said LDH “failed to include appropriate data and relied on inaccurate data” related to correlations between chloroprene exposure and cancers affecting areas other than the lung and liver.

Among the EPA’s current recommendations are for LDEQ and LDH to jointly host at least one community meeting virtually and in-person in Reserve.