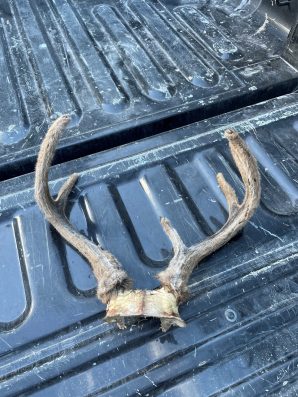 Agents arrested Hunter W. Varnado, 20, for resisting an officer, possession of a firearm by a convicted felon, taking deer during a closed season, hunting deer using illegal methods, and hunting without basic hunting and deer hunting licenses and without deer tags.

Agents received a tip about a convicted felon possessing a firearm while hunting.  Agents investigated the complaint and made contact with Varnado at his residence with a search warrant.

Agents found a 30-06 high-powered rifle in Varnado’s residence.  Varnado then admitted to deer hunting with the rifle.  When the agents attempted to arrest him he resisted several times.

Agents found that Varnado did not possess the required hunting licenses or tags for deer hunting and he is a convicted felon, which prohibits him from being in possession of a firearm.

While searching Varnado’s phone agents found evidence of Varnado harvesting a doe in August with the 30-06 rifle and a six-point buck in September with a crossbow.  Varnado was also found hunting with a high-powered rifle during the open archery season.

Agents seized the rifle and a set of antlers and booked Varnado into the West Baton Rouge Parish Jail.

Varnado may also face civil restitution totaling $3,249 for the replacement value of the illegally taken doe and buck.