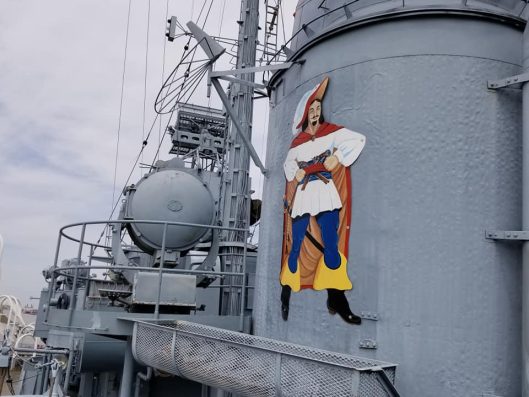 After a highly successful tour as Executive Director of the USS Kidd Veterans Museum, Rosehn Gipe is passing the baton to Parks Stephenson.  During her time as ED, Rosehn brought a high level of fiscal responsibility and ethical integrity to Museum leadership.  She kept the Museum in operation and ready for re-opening at first opportunity throughout the COVID-19 pandemic.  Parks will be building upon her legacy to chart USS Kidd’s future as one of Baton Rouge’s premier tourist attractions.

Parks is a graduate of the U.S. Naval Academy and 20-year U.S. Navy veteran, with qualifications in submarines, aviation and amphibious operations. After retirement from his military career, Commander Stephenson was an aerospace engineer for Hughes Aircraft, Raytheon, Lockheed Martin and General Atomics for almost 30 years.

What brought him to USS Kidd, though, was his passion for deep-ocean exploration as a Fellow in The Explorers Club.  After diving on the Titanic wreck as filmmaker James Cameron’s technical advisor and discovering a Japanese submarine that changed the history of the 1941 Pearl Harbor attack, Parks teamed with world-record diver Victor Vescovo to find the world’s deepest shipwrecks, USS Johnston and USS Samuel B. Roberts in the Philippine Sea.  Both destroyers were lost in action during the 1944 Battle off Samar, a seminal battle in U.S. Navy history often referred to as the “Last Stand of the Tin Can Sailors.”

Parks came to Baton Rouge prior to his historic dives to study and learn about USS Kidd, sister ship to USS Johnston, and would later insist that various media production companies wanting to film his telling of USS Johnston’s story would have to do so aboard the museum ship rather than in a film studio.  In the process, Commander Stephenson fell in love with both the ship and Louisiana.  With a thorough appreciation of USS Kidd’s naval history, a practical knowledge of naval architecture and marine engineering and experience in media entertainment — he has appeared in and/or produced over 25 televised documentaries — Parks was the Louisiana Naval War Memorial Commission’s natural choice to build upon Rosehn’s legacy and guide the USS Kidd Veterans Museum through the challenges of the 21st Century.  In addition to continuing the restoration of the ship to her World War II configuration, Parks has plans to make both the ship and Museum exhibits more interactive through innovative use of new technologies.  A visit to the USS Kidd Veterans Museum has always been informative and a fitting tribute to Louisiana’s military veterans, making the ship and the museum exhibits more interactive will help enhance the family experience. Parks will follow a strategy of “the ship is the trip” to grow the Museum as a major Louisiana attraction for locals and tourists alike.

USS KIDD Veterans Museum is located on River Road in downtown Baton Rouge and is open daily, 0830-1530, with a few holiday exceptions.  Admission is charged.  For more information call 225-342-1942 or visit online at www.usskidd.com.