Why Destrehan is No. 1, QB Eugene accounts for four TDs 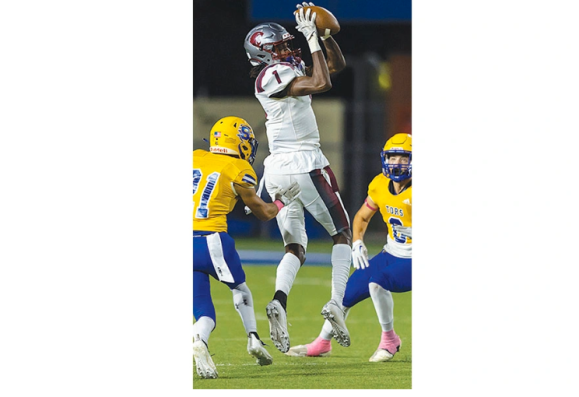 SULPHUR — Senior southpaw quarterback Jai Eugene Jr. put on a show Friday night at Matt Walker Memorial Stadium as he guided the No. 1 Destrehan Wildcats to a 49-10 win over the host Tors.

Eugene, who committed to Tulane, threw three touchdown passes and ran for another as the Wildcats (8-0) kept their record unblemished. Eugene completed 6 of 11 passes for 181 yards and ran for 49 yards on four carries.

On the Wildcats’ (8-0) first play from scrimmage, Eugene hit Leslie Jefferson for a 70-yard score, then scored on a 38-yard run on third down on the Wildcats’ third possession.

After falling behind 21-0, the Tors made two trips into the red zone in the second quarter but came away with three points, missing on a chance to make it a two-possession game.

“I thought we had got a pass interference on a little pop-pass in the back of the end zone, and we threw a couple of post routes that we dropped that could have went for scores,” Sulphur head coach Chris Towery said.

“I am proud of my kids. They didn’t quit. They played hard the whole time, and that is all we asked them to do.”

Down 21-0, the Tors went 57 yards on nine plays. Ashton Alston had a key 11-yard catch to convert a third-and-10, and the Wildcats were called for pass interference on another third down. Ethan Paiz capped the drive with a 37-yard field goal with 10:08 left in the second quarter.

Destrehan fumbled the ensuing kickoff and Slade Shove-Knox recovered it to set the Tors up at the Wildcats’ 25-yard line. The Tors were helped by two penalties, but quarterback Gage Trahan was stopped at the 1-yard line on fourth-and-goal.

Destrehan allowed the most points it has given up this season (10), but held the Tors to 177 total yards and picked off four passes. Lynard Harris had a 41-yard pick-six in the third quarter. Jacob Green made two interceptions and Kolaj Cobbins had two sacks.

Despite the loss, the Tors (2-6) can still make a push for the playoffs. Sulphur is at home for the next two weeks against District 3-5A opponents New Iberia and Comeaux.

“We have to come back,” Towery said. “We have two games that are very winnable.

“We have to come back and get ourselves ready for that. We will get a lot of power points out of those guys (Destrehan), and making the playoffs is not out of the realm with this new playoff system. We have to go 1-0 next week.”