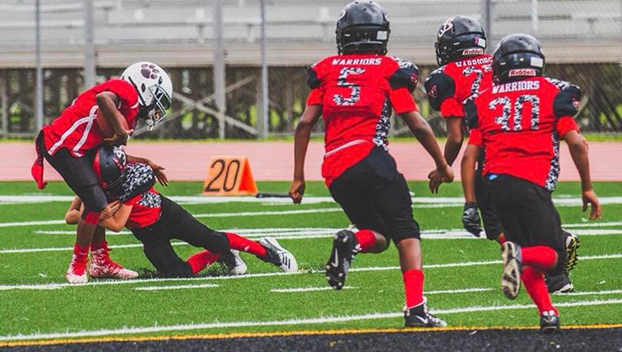 LAPLACE — The Warriors Red and Warriors Gold, two storied tackle football programs in St. John the Baptist Parish, will face off for the first time in nearly a decade this weekend at the inaugural Battle of the River Parish.

Gates open at 9 a.m. Saturday, October 22 at East St. John’s Joe Keller Stadium, located at 400 Ory Drive in LaPlace. The first game begins at 10 a.m. as the 8U, 10U and 12U teams prepare to take the field. Vendors and food will be available at the event, sponsored by School Board candidate #75 Rob Taylor (Powerhouse Sports) and Da Car Connection.

Both the Red and Gold programs have more than 20 years of history in St. John Parish. The teams were originally known as the St. John Heat and the St. John Junior Wildcats, but a name change was in order after the teams came under the St. John Parish Recreation umbrella during former Parish President Natalie Robottom’s administration. Following the beginning of the COVID-19 pandemic, recreation programs paused, and the parish ultimately moved in a new direction toward flag football. The tackle football teams, both maintaining the Warriors name established with the parish, branched back out into private organizations.

Taylor, president of the Warriors Gold, said the last time the former Wildcats and Heat teams went head-to-head was about seven years ago.

“It used to be a big game. You would have as many fans out there as you would expect to see at a Riverside and St. Charles game,” Taylor said. “Now that we are in the same league, we want to make it exciting with the first River Parish classic.”

Adding to the excitement is halftime entertainment featuring Hotboy Ronald and Choppa, best known for the viral New Orleans Saints anthem, “Choppa Style.” Live entertainment will take place after the first half of the 12U game, which is sure to be an intense match-up between two undefeated teams.

Many of the kids who grow up in the Warriors program will become tomorrow’s football starters across the eight high schools in St. John, St. James and St. Charles parishes.

“It’s an opportunity to showcase the up-and-coming youth tackle football players in the parish,” Taylor said. “The majority of these kids will be attending local high schools, so it’s a preview of what the future holds for football in the River Parishes.”

For years, both Gold and Red have speculated that they can beat the opposing team. Now it’s time to put those theories to the test.

“We’ve been two powerhouse teams that finally get to play each other,” Armstrong said. “The game is going to be a big event. We take the kids from the age of 5 to 12 and after that, we kind of lose them to the middle school programs. With stuff like crime going on, we want to give the kids a vision. We want to create a Bayou Classic environment like Southern versus Grambling, LSU versus Alabama or the Saints versus the Atlanta Falcons. We want to build the parish back up to everyone having fun and enjoying youth sports.”

The Battle of the River Parishes is also an opportunity for former players and fans to support the kids currently in the program by sharing their experiences.

Armstrong said one of the goals of the Warriors program is to teach the kids to live by a military code.

“If you do your job in the classroom and as a student athlete, everything will work out,” Armstrong said. “The only way another team can beat us is if we didn’t do our job…You’re only going to be great if you continue doing the right thing.”