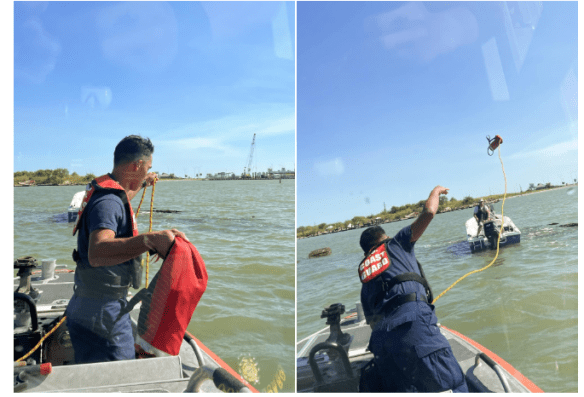 Coast Guard Sector Houston-Galveston command center watchstanders received a phone call at approximately 2 p.m. from the operator of a 17-foot pleasure craft who said his boat ran aground on rocks north of the Bolivar Ferry Landing and was taking on water.

Once on scene, the RB–S crew took aboard the two boaters and transported them to a public boat ramp on the Bolivar Peninsula.

No injuries were reported. The vessel’s owner will arrange for salvage of the pleasure craft, which currently remains aground and anchored on the rocks.

“It is so important for boaters to make a plan and familiarize themselves with their surroundings and potential hazards before getting underway,” said Petty Officer 2nd Class Allan-Cesar Shields, operations specialist, Sector Houston-Galveston. “We recommend using electronic or paper navigational charts to map out safe routes and keeping a sharp lookout for shallow water areas and submerged objects.”