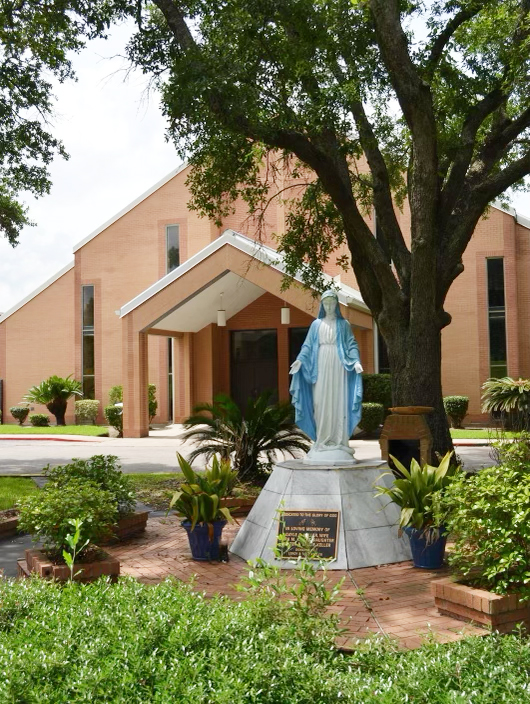 Located at 780 Highway 44 in Reserve, Our Lady of Grace Catholic Church has a rich, 85-year history as the first Black Catholic Parish in the region.

RESERVE — In 1937, Our Lady of Grace Catholic Church was established as the first Black Catholic parish in St. John the Baptist Parish. Eighty-five years later, the church is still rich in multi-generational roots, and the members who have grown up inside the church walls say it feels like home.

Our Lady of Grace Catholic Church’s 85th Anniversary Mass and Banquet will take place on November 6. Parishioners recently celebrated with a Community Mass and Picnic on September 25. For lifelong church member Tiffany Chambers, it was a bittersweet occasion. This year’s picnic was the first she’s attended without her aunt, who was a member of Our Lady of Grace from her infancy into her 80s.

Chambers’ great-grandmother was among the first to walk through the doors of the church when it opened in the 1930s. Her grandmother was a member of St. Catherine’s Auxiliary, dedicated to the church and the school. Chambers followed the same path, as Our Lady of Grace set a spiritual backdrop for her life’s milestones including Baptism, First Communion and Confirmation.

While the pastors have changed over her lifetime, the customs and traditions never have. Her fondest memories include growing up with the Catholic nuns at Our Lady of Grace School. Demanding and disciplined, they brought students closer to the church by teaching them what needed to be respected and observed. The school and the Church Parish often came together to host unforgettable fairs that the entire community enjoyed, a core memory of Cambers’ childhood.

“We have an open-door policy, and everyone is welcoming. When you come into Our Lady of Grace Church, you feel like you are at home. We don’t have any strangers. When you walk in, you can just feel the love from the congregation, and it makes you want to come back again,” Chambers said.

Kayla Johnson, 23, has had the same experience growing up in Our Lady of Grace Catholic Parish. Church has always been a place for her to spend time with her parents and grandparents while growing closer to God.
“It just feels like coming home. The community, the closeness here is what makes it special,” Johnson said. “I feel like it’s given me a guide for life. Having the church is like having a way to center myself and having a community I can always depend on to lead me through different phases of my life.”

The origins of Our Lady of Grace Parish trace back to 1931. Father Jean M. Eyraud, pastor of the nearby St. Peter’s Church in Reserve, expressed a desire to build a church for the Black children of his parish. Eyraud had the old John L. Ory school building in LaPlace moved to St. Peter’s in Reserve, where it became the first Black parochial school in the community under the name St. Catherine School.

Eyraud requested that a separate church Parish be considered for the Black Catholics in the community. After careful consideration, it was decided a new mission would be established in Reserve. Father Roderique Anthony Auclair, S.S.J., one of the Josephite priests who dedicated their lives to evangelization in the African American community, was assigned the task of developing the mission in 1936.

Construction of the church, rectory and garage were completed in 1937, and Father Auclair named the church Our Lady of Grace at the request of two major benefactors who wanted the church to bear the name of the Blessed Mother.

The first Mass was celebrated on Palm Sunday, March 21, 1937. The mission was officially dedicated just under three months later by Archbishop Rummel on June 13, 1937.

St. Catherine School became known as Our Lady of Grace School, and Mother Henriette Delille’s Sisters of the Holy Family were brought in to teach the Our Lady of Grace students. In 1948, Father Joseph George Turner built a new combination elementary/high school and gymnasium-auditorium with the approval of the archbishop.

One of the most difficult days in the history of the parish was January 29, 1957, the day the original wood frame of the school and convent was consumed by fire. Father Joseph G. LeFrois  collaborated with Walter Keller Sr. to construct new school and convent buildings with paid and volunteer workers. The new buildings were dedicated on June 22, 1958. However, the high school closed only eight years later due to declining enrollment. The elementary side shifted to serving pre-K through eighth grade prior to its permanent closure in 2016.

Our Lady of Grace Church Parish has remained strong through the years. The 50th anniversary was celebrated November 6-8, 1987 as former members of the faith community reunited for the occasion.

Under the direction of Father Robert William Sullivan, former parishioner Lucien Gauff Jr. began construction of a new Our Lady of Grace Church in late 1991. The new church was dedicated on September 8, 1992.

The 75th anniversary, themed “We have come this far by faith,” was celebrated with Father Roderick J.D. Coats and Parochial Vicar Christopher C. Amadi.

The current pastor, Father Godwin Ani, SSJ, joined the Our Lady of Grace family in 2022.