Lutcher Bulldogs take down the Tigers 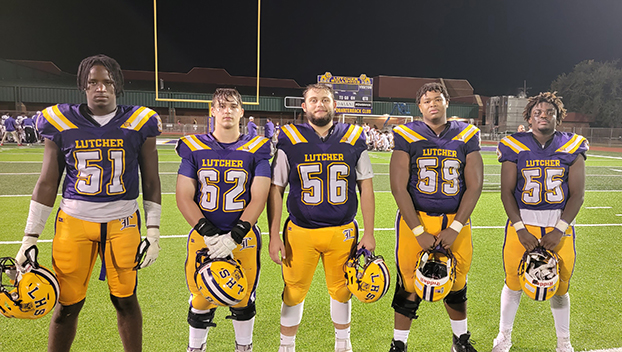 The Lutcher Bulldogs sought to obtain a big win on Friday night and they did, as they hosted the Hahnville High Fighting Tigers. The Bulldogs sitting with a 5-1 record for the season so far, looked really good against the 5-A Tiger team who had a 3-3 record on the season thus far. An early penalty gave the Lutcher a 1st n goal, which set up Dwanye “Lunch” Winfield up for a touchdown. However, it got called back for offensive penalty. True to form though, Winfield would still take it in for a touchdown to make the game 7-0 early in the first quarter. The Bulldog defense managed to hold off the Tigers from scoring in the first quarter, which ended the quarter 7-0 in favor of the Bulldogs.

The Tigers came into the second quarter on a fourth down, yet again the Dogs defense quickly squashed that plan, holding the Tigers off and changing the downs. However, Hahnville’s defense took no prisoners either, and stopped the dogs from scoring on their run down the field. Another penalty against the Tigers pushed them way back to an even a longer drive to the goal and the Bulldog defense stopped the Tigers at every turn, which forced a punt. Winfield carries many times to advance the ball for the Dogs and capitalizes with the Bulldog’s second touchdown of the night for 46 yards. After the field goal, the Bulldogs took the lead 14-0 in the second quarter. With more back and forth the Bulldogs gets a big break from yet another penalty giving them great field position. With three big plays, Lunch scores yet again, giving the Bulldogs a 21-0 lead just before the end of the first half. As the Tigers begin to go up field, Lutcher picked up an interception to give the Dogs another attempt to score before the end of the half as the Bulldogs lead the Tigers 21-0.

Coming into the third quarter, Lunch makes another touchdown to open up the half which made the score 28-0 shutting the Tigers down. Dakota Williams finally scored for the Tigers late in the third quarter to make the score 28-7 with the Bulldogs still in the lead. But a beautiful pass thrown by Winfield into the end zone gave Lutcher the touchdown and the score was 35-7 in the 4th quarter. The Tigers answer as Romell Hardy finishes a catch from Gregson and the Tigers score again in the 4th quarter to increase the score 35-14 late in the fourth quarter. As the fourth quarter closed, Lutcher picked off an interception to put the final nail in the coffin as Lutcher defeated the Hahnville Tigers 35-14 final.

Outstanding plays were made by many of the Bulldogs such as Dwanye Winfield, Tylin Johnson, Brock Louque, Trenton Chaney, Mattheu Garron, Reshad Sterling, Terryne Harris, Donovan Arbuthnot and Devin LeBlanc.

The entire Bulldog team played an excellent game and should be very proud of this victory. After the game, Coach Jenkins stated this, “We knew what they would try to do physically, we knew they were trying to rebrand themselves after a rough start so we saw it coming so we sort of took it as a challenge…so if our advantage is we gotta just play harder than you, then that’s what we’re gonna do. So that’s what the challenge was our guys, we just gotta play harder.”

Play harder indeed is what Lutcher did and we look forward seeing them in action next week as they play Assumption.