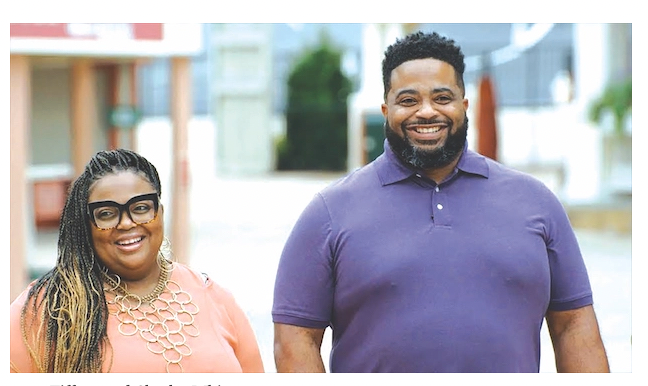 In today’s economy, more and more people are struggling to pay bills, buy groceries and fill up the gas tank. Lake Charles residents Charles and Tiffany White got help. Soon they’ll be on TV to tell their story and point others to important resources that could help them get out of debt and take control of their finances.

The new TV series Opportunity Knock$ premiers Thursday, Oct. 27, on the PBS Passport streaming service and through the fall and winter on PBS stations nationwide.

With 60 percent of Americans living paycheck-to-paycheck, many people are unaware of the local and national resources available to help them get out of debt and take control of their finances.  Opportunity Knock$ pairs each family with one of three nationally recognized Opportunity Coaches, guiding them to results which can be replicated by viewers by utilizing the unique Opportunity Finder to locate these resources in their own cities.

It’s reality TV used for good, and it has the power to remove systemic barriers for everyone to build better lives, according to the Whites.

The series also focuses on the mental and emotional elements of debt as much as the practical issues and solutions.

The White’s story begins before the ice, flood, hurricanes and pandemic.

“In 2009, I became pregnant with twins,” Tiffany White said. Both were born with a very serious medical condition. After seven months in the hospital, we lost Christopher.”

The loss of income, medical stay and travel, but mainly the loss of their child created a chasm of grief and burden.

“We lost our home, our cars and our jobs,” Tiffany said. “Before that time, we were astute with how we handled our finances. After the foreclosure we spent a lot of time trying to recoup our credit. We were getting there. We were a tiny bit ahead when the pandemic and hurricanes impacted the lives of everyone in Southwest Louisiana.”

Charles and Tiffany incurred the cost of hotel accommodations. As church pastors, they couldn’t help but respond to the needs of their congregation.

“We used our savings and our credit cards,” Tiffany said.

At one point they looked at each other and both knew what the other was thinking. Life couldn’t continue in this same way. They talked to each other about what they would do differently if they just had the opportunity to start over. Then they talked to God about starting over.

“A month later I saw the casting call information about Opportunity Knock$ on a social media site,” Tiffany said. “Ronaldo Hardy shared the post, and I knew of him – he’s a pastor of the Love Alive Church in Baton Rouge – and thought if he was sharing it, it must be real….maybe.”

Ronaldo Hardy is a community development powerhouse, national speaker, pastor and host of Opportunity Knock$.  It was real.

“All you had to do was put in your email address, and send Opportunity Knock$ some basic information to be considered,” Tiffany said.

More information was required and Tiffany decided to drop it. However, the post popped up again and she decided, “I’m going to go for it.”

She heard from the show’s producers.

She had not told her husband about it, and even planned to go through the next step, the Zoom interview solo. But the interviewer asked if Charles was home. He was, and he was in the kitchen cooking when she sprung everything on him for the first time.

“The greatest part of the struggle for me was losing our son,” Charles said. “We named him, we named all our children when we were in college, dating. My wife and I had been married eight years, and we waited patiently for three-and-a-half years for our first child. After we lost Christoper, it was difficult to reach out for help, not that I didn’t think there were resources. I was in such a state of mind that I didn’t want to look for help of any kind.”

Because of who the Whites are and because of what they believe, they have revealed vulnerabilities in the past.

“As pastors, we can use those vulnerabilities to relate to and perhaps help others,” Charles said.

But this was on national television. It wasn’t an easy decision to make.

Southwest Louisiana Opportunity Knock$ viewers will be able to identify with the “maintenance mode” into which many fell after the hurricanes. Like others, the Whites accepted government assistance but realized they didn’t want to make it a habit.

“The food stamps were great,” Tiffany said. “They helped when it mattered most, but we decided not to depend on government assistance.”

Tiffany said Opportunity Knock$ most enlightened her on how car financing works.

“There is always a better rate,” her financial coach told her. “Keep looking.”

“For me, the biggest takeaway was a reminder, Charles said. “You are equipped for the dream you have. You just have to be disciplined enough to go for it, to stay focused.”

“It was also a reminder that we’re setting the stage today for our children’s financial legacy,” Tiffany said.

Viewers will have access to the same tool, the Opportunity Finder, a search tool featured in Opportunity Knock$ used to solve problems and create financial freedom.