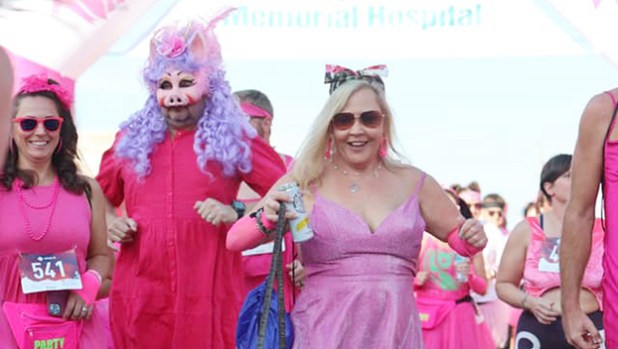 The annual Carter’s Champions Pink Dress Run is scheduled for October 22 in Biloxi and will include some familiar faces from St. John the Baptist Parish. 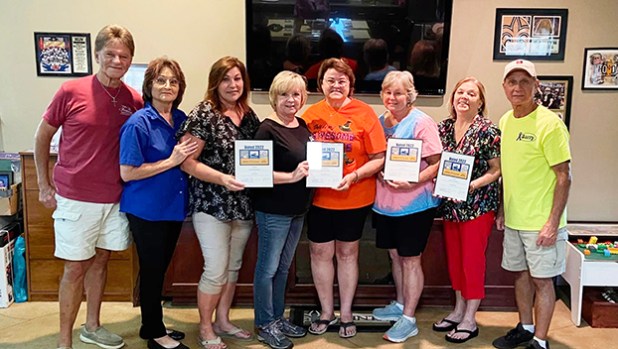 Members of Perry’s Posse were presented four awards in the Best of the River Parishes 2022 contest during a board meeting this week in Garyville.

GARYVILLE — Perry’s Posse and friends are traveling from the River Parishes to the Mississippi Gulf Coast on October 22 to spread breast cancer awareness at the Carter’s Champions Pink Dress Run.

The bedazzled pink cowgirls and cowboys are on a mission to prove that even those from a small town can make a big difference in the fight against cancer. For the past year, Perry’s Posse members have enjoyed connecting with like-minded causes.

Joan Lebouef, one of Perry’s Posse’s founding members, is hopeful that networking beyond Southeast Louisiana will lead to more corporate donations to assist local cancer patients, especially since fundraising efforts were hard hit by the COVID-19 pandemic and Hurricane Ida.

“We don’t turn anyone down. If someone says their daddy in Pennsylvania is undergoing cancer treatment, we will put him on our list and help him,” LeBouef said. “We are getting new patients three or four times a week. We realize that we’re not getting any younger, and we can’t keep doing garage sales. We need to jump on this and get Perry’s Posse’s name out on the Gulf Coast. Who knows, our story might touch somebody’s heart.”

Formed in 2014 in memory of Perry Levet, Perry’s Posse has a mission to provide emotional, financial and spiritual assistance to active cancer patients in the River Parishes and beyond. The organization was recently voted “Best Local Cause,” “Best Local Hero,” “Best Philanthropist” and “Best Fundraising Event” in the 2022 Best of the River Parishes contest.

Perry’s Posse members learned about the Carter’s Champions Pink Dress Run during a trip to Island View Casino last year, according to LeBouef. This year, they have assembled a team of 28 individuals to form a Perry’s “Pink” Posse in support of a cause near and dear to their hearts.

“They are all volunteers, just like we are. When I got to meet the girls from the foundation, I said, ‘Oh my God, you’re just like us. I can’t wait for you to meet our people,’” LeBouef said. “What I envision is for everyone to see what a group of small town people have done here. Pick a cause – diabetes, juvenile arthritis, anything close to your heart. It doesn’t matter if you come from the little town of Garyville. You can make a difference We’re all given a certain amount of time, and you have to do something while you’re here.”

LeBouef said the River Parishes should stay tuned for announcements of several fundraisers in the making, inspired by what members have seen in the Gulfport/Biloxi area. While Carter’s Champions focuses on breast cancer, Perry’s Posse wants to bring a “colors of cancer” run to St. John Parish recognizing cancers of all types. The group has also formed friendships with musicians along the Gulf Coast willing to participate in fundraising efforts in the River Parishes.

Perry’s Posse also plans to host a booth at the Merry Market of Louisiana November 12-13 in Baton Rouge. For more information on Perry’s Posse and ways to support active cancer patients, visit perrysposse.org or call 504-416-8093.