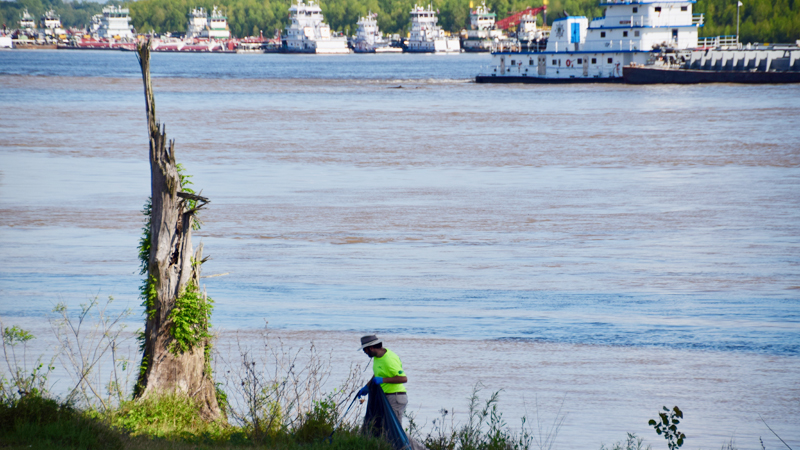 (The Center Square) — The U.S. supply chain might be on the receiving end of a 1-2 punch that could crater an economy veering toward a possible recession.

In addition to a possible strike by railroad workers, a drought in the Midwest has slowed barge traffic on the Mississippi River, which is at the lowest water levels in 23 years.

Significant ramifications for grain and soybean prices globally are tied in. According to the U.S. Department of Agriculture, the New Orleans District exported $3.9 billion in corn and $16.9 billion in soybeans in 2020.

Mississippi Agriculture Commissioner Andy Gipson said the low water levels couldn’t come at a worse time for farmers in the Magnolia State. He said farmers have harvested about 73% of their soybeans, 98% of their corn and 86% of rice.

“We’re in the peak of the harvest season in the Southeast and Mississippi specifically,” Gipson said. “We’re getting the very last little bit of our harvest right now and a lot of that is grain. The bulk of it would normally go to an elevator on the Mississippi River for loading on the barges for the stream of commerce up and down the river and around the world. And then you’ve got a total standstill for the foreseeable future.”

According to the U.S. Department of Agriculture weekly barge traffic statistics, barges carrying corn and soybeans on the Mississippi River system for the peak weeks of harvest are down by double-digit margins as compared to the same time last year.

While harvests can vary due to weather conditions, the lower numbers for barge traffic show the impact of low water levels.

The low water levels and higher diesel costs are also driving up costs to ship goods down the river as well. Barge rates are up 246% compared with rates from just a decade before and 282% more than they were in 2020.

The biggest problem for the Mississippi River levels is the lack of rain upstream in the Midwest. Long-term forecasts from the National Weather Service have the river continuing to drop to 10 feet below its normal stage through Nov. 3. Normally at this time of a year, a front in the upper Midwest or a tropical system off the Gulf will have bumped water levels to bridge the time from dry summers to wetter winters.

The river’s main shipping channel is maintained at a depth of 9 feet from St. Louis to Baton Rouge, La., and 45 feet at Baton Rouge to the Gulf of Mexico, which allows cargo ships to go upriver.

“The Coast Guard is actively engaged with the Army Corps of Engineers and river industry partners to ensure commercial traffic remains informed about existing and predicted waterway conditions,” said Petty Officer 3rd Class Riley Perkofski from the U.S. Coast Guard 8th District Public Affairs Office. “With any new river updates we inform mariners by putting out a broadcast notice to mariners. This is a safety broadcast that informs mariners of any dredging or closures along the river.”

Gipson says there is an alternative for Mississippi farmers and that’s shipping their harvested grain and soybeans to the Tennessee-Tombigbee waterway, a canal that connects the Tennessee River with the Tombigbee River, which provides access to the Gulf of Mexico at Mobile. He said that the only problem is that will add costs to farmers that will be passed onto consumers already dealing with record-high inflation.

“Farmers are resourceful, and creative,” Gipson said. “We’ll find a way to get around this and get through this. And the end result though, I’m afraid, is going to result in a interruption of supply and the promise of increased prices on top of the additional increases we’ve seen to the consumer.”

Steve Wilson has been an award-winning writer and editor for nearly 20 years at newspapers in Georgia, Florida and Mississippi and is a U.S. Coast Guard veteran and University of Alabama graduate.