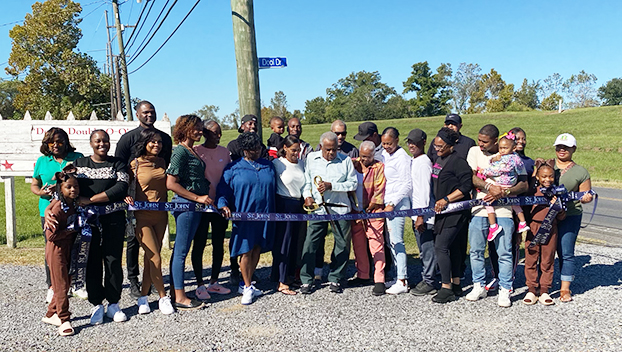 Family and friends join Prescott "Dool" Bailey in cutting the ribbon on Dool Drive earlier this month in Wallace. The street is now in the St. John Parish address system, recognizable by the Post Office and 911 Communications.

WALLACE — Prescott “Dool” Bailey of Wallace saw his long-time dream come to fruition on October 1 as family, friends and elected officials joined him to cut the ribbon on Dool Drive, a street named in his honor.

Prescott “Dool” Bailey looks up at the new street sign that bears his name.

This would not have been possible without the diligence of Bailey’s family members who knew how much the street naming would mean to him.

Bailey’s granddaughter, Rilynn Bazile, said it was important to her grandfather to have the property bear his own name because he worked so hard to purchase the land that his children and grandchildren have called home for more than 30 years.

“Previously, it was mentioned, but he never really followed through and stayed on top of it. Now we were able to get it done with the efforts of our family members not allowing him to stand alone in the process and using the resources that we have to help him follow through,” Bazile said.

District One Councilman Kurt Becnel, a longtime friend of Bailey’s family, was present for the October 1 ribbon cutting.

“It was exciting for (the Parish Council) because we usually just introduce an ordinance and move on, but the outpouring of support of his family was so nice to see,” Becnel said. “Usually when people want to do a street sign, it’s just a street sign, but this family is so tight-knit, and I love that. They love their father and their grandfather, and I do, too.”