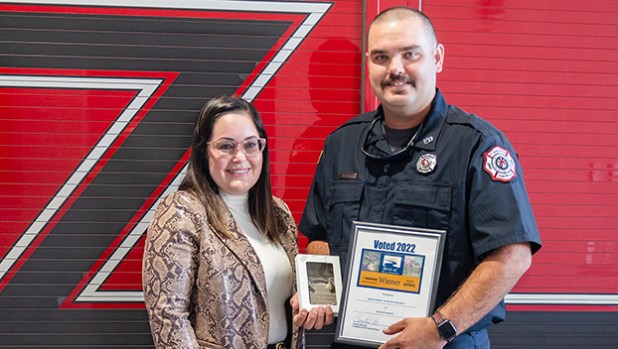 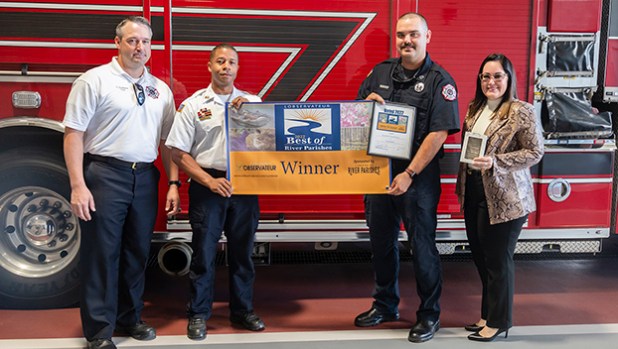 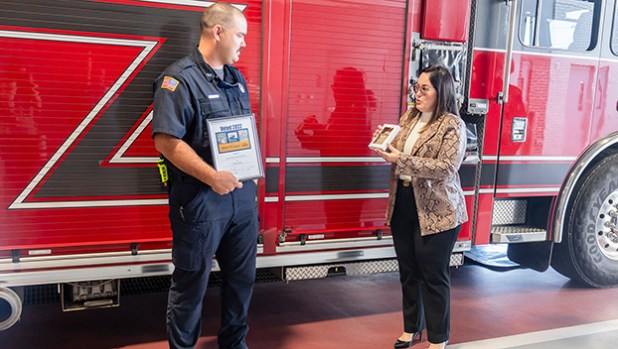 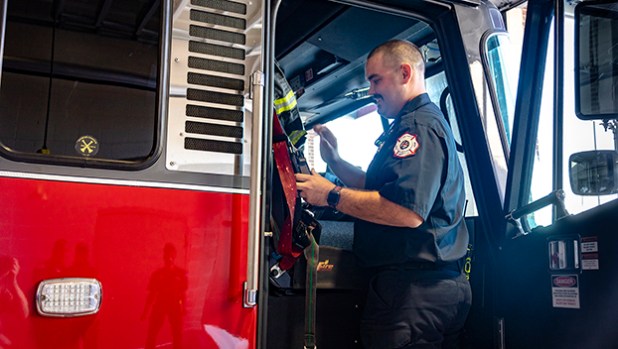 LAPLACE — Spencer Perilloux’s dedication and commitment to firefighting was recognized by the community when he was recently voted “Best First Responder” in L’OBSERVATEUR’s 2022 Best of the River Parishes online contest.

Perilloux has been a firefighter/operator with the St. John the Baptist Parish Fire Department since February 2019. He spends his off days volunteering in St. Charles Parish with the Norco Area Fire Department, demonstrating a passion for public service.

“I definitely didn’t expect this,” Perilloux said after he was surprised with the award at the Hemlock Station last week. “It means a lot that people in this parish are recognizing me amongst the roughly 40 firemen that we have working in St. John. I’m really honored to have that support. This is something I’ve dedicated 9 ½ years of my life to. On calls, sometimes I come across people I know, and sometimes it’s complete strangers, but that doesn’t change how I’m going to respond to that call.”

Perilloux, a native of Montz, was drawn to fire services shortly after graduating from Destrehan High School in 2013. He was walking to a buddy’s house when he noticed a fire down the street. He watched the fire from the time fire personnel arrived on scene to the time they left, and he knew from that day that firefighting was something he wanted to try.

In 2013, Perilloux began volunteering in Norco and quickly fell in love with firefighting. He decided six months in that he wanted to go professional. In 2014, he enrolled in the Louisiana FETA program at LSU, and he’s never looked back since. Soon after, he began his first career position with the Houma Fire Department.

“From Houma, I came to St. John. I’ve worked with quite a few different individuals around the Southeast region of the state, from down the bayou to Kenner and Metairie,” Perilloux said. “The Fire Service in general is really a brotherhood. Everyone comes together as one big family. The smaller a department is, the closer everybody is. There was brotherhood in Houma, but out here in St. John, we are such a small department that everybody works with everybody, so you know everybody a lot more.”

According to Perilloux, a smaller department also comes with a larger workload. On a normal residential structure fire call in St. John Parish, the personnel on scene typically includes a primary operator, a secondary operator, and three or four guys fighting fire.

Fire Chief Cain Dufrene said it’s nice to see Perilloux recognized for all of the hard work he puts in on a daily basis.

“It’s a job that usually goes unnoticed with all the duties they have to do, and Spencer is well deserving of it. He puts in the work and does a good job,” Dufrene said.

L’OBSERVATEUR’s second annual Best of the River Parishes online contest kicked off in June 2022 with a month-long nomination phase in which community members used an anonymous write-in ballot to name their favorite people, places and events across 100+ categories. The top three vote-getters in each category moved onto the voting phase in August 2022.

More than 53,000 votes were cast this year. The full list of winners will be published in the Fall edition of River Parishes Magazine in the first week of November.

The Best of the River Parishes contest will return in Summer 2023.