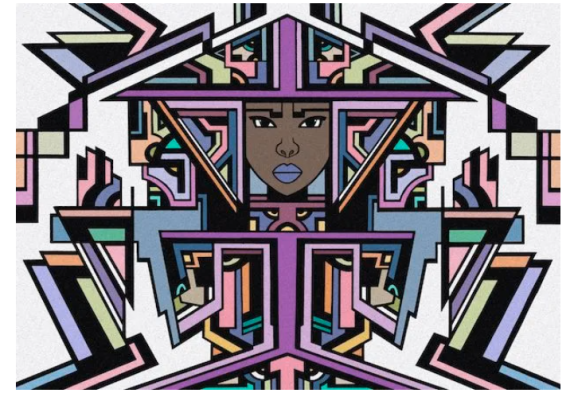 Two generations of explorative art will be on display at the Black Heritage Gallery from Friday, Oct. 7, to Saturday, Nov. 19. The exhibit, “I Am An Artist Like My Father Before Me,” will feature the art of father Nathaniel “Pops” Landry and his son, Nathaniel Landry.

Landry said art became a family affair after he was inspired by his father’s artistic practice.

“His work ethic and creativity inspired me. Even in his latter days, his work continues to amaze me,” he said. “He creates so freely and makes it seem so effortless like his pen is one with Heaven and Earth. I aspire to reach that type of peace and creativity,” Landry said.

“The inspiration for the title came from a line that Luke Skywalker told the Emperor after he refused to kill his father, Darth Vader, in “Return of the Jedi” — ‘I am a Jedi, like my father before me,’ ” he said. “I’ve always loved that line because Luke realized that he is his father’s son and stood firm on his resolve not to fall into the darkness of evil.”

He explained that this exhibition will give locals the unique opportunity to see two generations of independent art that were inspired by one another. Younger viewers will have an even more special experience, he said.

“It will also inspire younger viewers to see art that is purely from the imagination that is not taken from any reference photos.”

“I Am An Artist Like My Father Before Me” will have a range of artistry. Pops’ art is highly abstract and manifested in traditional mediums. Landry’s art, however, has more modern influences. “My art has a very strong sequential art influence with a mixture of traditional and digital mediums,” he explained.

Much of Landry’s art is afro-futuristic abstract expressionism. He said this medium of art consists of “images of people of African descent draped in geometric shapes, lines, angles, and ornate structures that are imaginative and otherworldly.”

He continued by explaining that artistic genres like afro-futurism are important, as “art in marginalized communities brings members of a community together to solve problems, build relationships and get involved in ways that rebuild social capital.”

His appreciation for pop culture led him to this form of art.

“My love for comics, manga, anime, science fiction and fantasy movies became reflections and inspiration for my subject matter and work.”

Some standout pieces that patrons can look forward to viewing include Pops’ wood sculptures. Landry proudly said these pieces exhibit his father’s “skill, imagination and talent.”

He said he believes patrons will appreciate his skateboard piece titled “Sokehime” or “Armored Princess,” and his wood panel piece “Amphone.” These pieces are special to Landry because of the creative flexibility that was required to create them.

“I love these pieces and the problem-solving that was required to create them,” he said. “It will be a while before I work in that traditional style again because I have found an interest and balance working traditionally with the digital medium.”

The exhibition will feature a variety of artistic mediums, including wood, canvas, watercolor paper, pen and ink, acrylic and digital mediums.