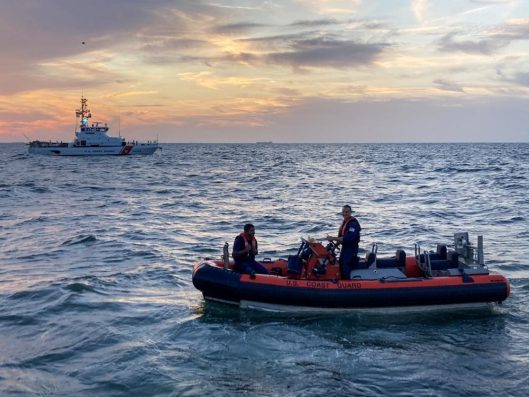 Since the first recorded lancha interdiction in the late 1980s, the Coast Guard has seen a significant uptick in the detection of the vessels, recording an 11.5 percent increase in interdicted lanchas from fiscal year 2021.

A noteworthy case from this year occurred on Aug. 30, when Coast Guard crews interdicted three lanchas with a total of 14 Mexican fishermen, 2,425 pounds of red snapper and 440 pounds of shark aboard.

To counter illegal, unreported, and unregulated fishing, the Coast Guard utilizes a layered approach for operations through aircraft, small boats, and cutters.

Up to 27 million tons of fish are caught illegally each year throughout the world. IUU fishing accounts for 20 to 30 percent of global annual catch. Global losses from IUU fishing are estimated to be as much as $23.5 billion per year.

“We view the lancha issue as an immediate threat to our living marine resources, border security, and U.S. sovereignty,” said Lt. Cmdr. Brendan Dunn, assistant chief of enforcement, Coast Guard District Eight. “In recent years, the illegal trade of red snapper, grouper, shark and other reef fish species has become extremely lucrative for the transnational criminal organizations operating in Mexico. With the continual increase of at-sea lancha interdictions, we would like to recognize the tremendous efforts of our field units at Coast Guard Sector and Air Station Corpus Christi, Station South Padre Island, our fast response cutters and patrol boats. We also thank our regional, state and federal partners for their tenacious commitment, professionalism, and teamwork to support this mission.”

A lancha is a fishing boat used by Mexican fishermen that is approximately 20-30 feet long with a slender profile. They typically have one outboard motor and are capable of traveling at speeds exceeding 30 mph. Lanchas pose a major threat, usually entering the United States Exclusive Economic Zone near the U.S.-Mexico border in the Gulf of Mexico with the intent to smuggle people, drugs, or poach the United State’s natural resources.