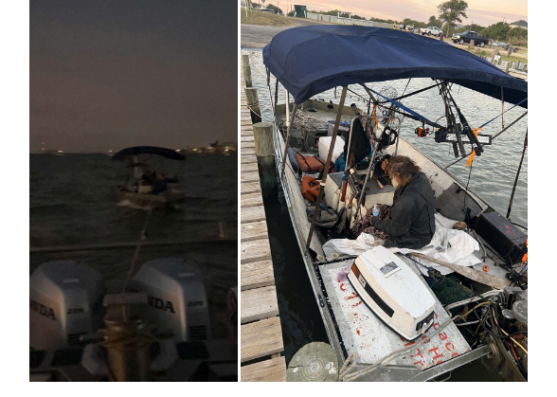 Coast Guard Sector Houston-Galveston command center watchstanders received a notification at 2:45 a.m. from the Galveston Police Department of an overdue 14-foot jon boat with two people aboard who were last heard from at 10:30 p.m. Sunday. It was reported that their vessel was possibly disabled and taking on water near San Leon off Eagle Point.

At 5:30 a.m., the helicopter crew located the overdue boaters approximately 1,500 yards off Eagle Point and directed the RB–S crew to the jon boat’s location. Upon arriving, the Coast Guard boat crew confirmed the identities of the boaters. The RB–S crew and a Galveston Police Department boat crew assisted the vessel in mooring at Eagle Point Marina in San Leon.

“If you’re heading out on the water, please remember to file a float plan,” said Jay Schroeder, Sector Houston-Galveston command duty officer. “These two men were incredibly fortunate to be found. The quick launch of our assets and the teamwork among our crews helped in the timeliness of this rescue.”