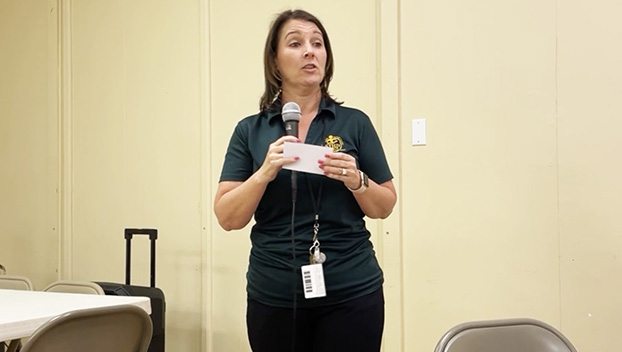 Interim Superintendent Rebecca Johnson speaks at a recent informational meeting for Save Our Schools.

LAPLACE — Despite all of the challenges St. John the Baptist Parish students faced last year with virtual learning and instability following Hurricane Ida, preliminary information on school performance scores showed improvement across most schools in the district.

Interim Superintendent Rebecca Johnson gave an update on progress and goals for continued growth during last week’s informational session with Save Our Schools, a new organization focused on lending assistance to the school system to help ensure success for the students of St. John Parish.

District and school performance scores were frozen after 2019 due to impacts from the COVID-19 pandemic. However, Johnson reported that the district has received academic index results from assessments that took place in spring 2022. The academic indexes will be combined with the progress indexes to reveal complete performance scores, anticipated to be released some time in November.

“If we have projected correctly, we expect many schools will show letter grade growth,” Johnson said.

According to Johnson, academic indexes are based on factors such as LEAP test scores and student interests and opportunities. Emily C. Watkins saw an 11.3 percentage point increase in academic index results alone.

Fifth Ward Elementary, which was previously flagged as an ‘F’ rated school, is expected to show letter grade growth this year based on a 9.4 percentage point increase in academic indexes. Prior to joining the St. John the Baptist Parish School System in 2021, Johnson supported Fifth Ward while working for the Department of Education in Baton Rouge, and she is thrilled to see continuous progress at the campus.

Johnson addressed several questions and concerns during the Save Our Schools session, including student population, the status of buses, transparency of School Board meetings and the district’s budget.

“We are concerned about the student population in St. John Parish. We understand there are 10,000 seats, but only 4,000 and some students,” said Attorney Sylvia Taylor, a local businesswoman and one of the leaders of Save Our Schools. “We want to know whether we are maximizing where the schools are…We are not advising the superintendent to do anything. We just want answers so St. John Parish can be productive as possible.”

“We do have space for more capacity, and those seats will be filled after we build more trust in the school system,” Johnson said.

Johnson added that year’s early childhood seats are almost at capacity for the first time in years. At this time, there are no plans to consolidate school buildings at the elementary or high school level.
“We feel as a district that we have a plan in place to increase student achievement, and we don’t want to stop that momentum now,” she said.

According to Johnson, St. John Parish Schools are in the process of helping uncertified teachers obtain their certifications using funding provided by Marathon Petroleum. All teachers participating in the certification program have given a five-year commitment to the district as a retention policy to lessen employee turnover.

All schools are utilizing a Tier One curriculum, and common district monitoring is being put in place to more accurately compare performance between schools. The CTE program is being expanded to include more opportunities and a partnership with River Parishes Community College.

Speaking on equipment upgrades, Johnson said security features and lighting are being added to the Leon Godchaux campus, where Emily C. Watkins is currently housed as Ida repairs continue. She said the recent burglary of the ECW home base campus was a setback that amounted to nearly $500,000 in damage.

Fifteen school buses have been ordered, though only five are expected to be in by November due to supply chain shortages. The district has received quotes on pressure washing and painting older buses in the fleet.

The last piece of equipment has arrived to begin live-streaming St. John Parish School Board meetings. In the meantime, Johnson said all meeting videos are being posted to the district’s website.

This year, the School System is projected to receive $31.6 million in ad valorem taxes. The ad valorem tax revenue also supports the Parish Government ($29.8 million), the Sheriff’s Office ($25.4 million), and other areas such as the Library System, the Assessor’s Office and the Council on Aging.

Approximately $54 million to $56 million in sales tax revenue is divided among the taxing entities, resulting in an additional $32 million for the School System.

Along with Sylvia Taylor, Save Our Schools is headed by retired educator Annette Houston, Eliza Eugene, who coordinates the annual Backpack Extravaganza, and Dayna James, who serves as president of the Kiwanis Club of Tri Parishes.

Save Our Schools will host a School Board candidate forum the evening of October 11 at New Wine Christian Fellowship in LaPlace.