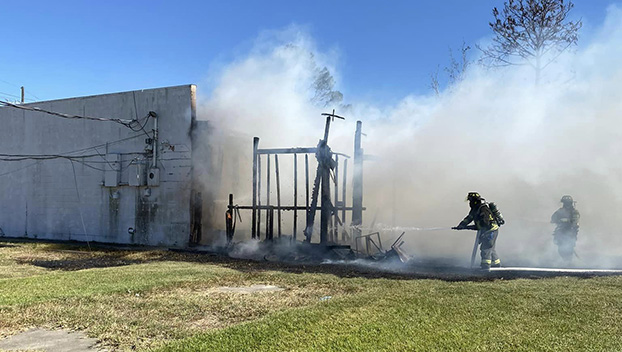 LAPLACE — The State Fire Marshal’s Office is currently investigating the origin of a fire that was quickly extinguished Wednesday at the old Kart N Kary in LaPlace.

The St. John the Baptist Parish Fire Department contacted the State Fire Marshal’s Office for further investigation since the building was vacant at the time the fire started.

“We called them out because it was not occupied, and, from what I understood, the owner was having issues with people squatting in it,” said St. John Parish Fire Chief Cain Dufrene. “We know around where it started, but the cause is currently under investigation.”

The Fire Department was alerted to a structure fire at E. Airline Highway and Mcreine Road in LaPlace just after 3:30 p.m. Wednesday. Three engines and one ladder truck arrived on scene within five minutes and noticed flames coming out of the back of the building with heavy smoke visible.

It took approximately 25 to 30 minutes to get the majority of the fire under control, according to Dufrene.

“They quickly extinguished the actual fire, but the fire had already made it inside the business,” Dufrene said. “They were able to knock it out with no issues and no injuries.”

The fire appears to have started in a wooden storage room attached to the exterior of the building before making its way inside the old gas station.

“There wasn’t much in there to burn other than the structure itself,” Dufrene said.