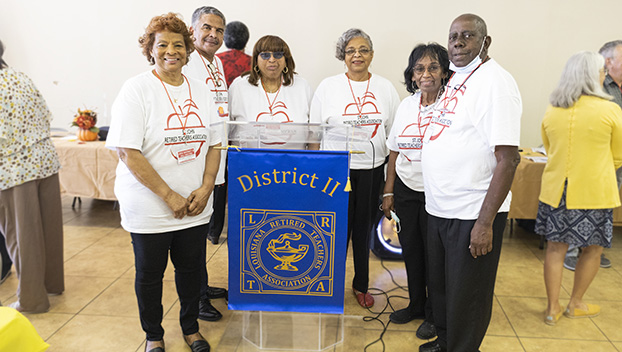 LAPLACE — When Mike Tregre looked around at the faces of retired teachers gathered at New Wine Christian Fellowship on September 22, he saw the village that guided his path and led to him being elected sheriff.

Tregre was among the guest speakers at the Fall Meeting for District II of the Louisiana Retired Teachers Association, hosted by the St. John Retired Teachers Association. Attendees represented not only St. John Parish, but the entire LRTA District II, encompassing former educators from the three River Parishes as well as Assumption, Jefferson, Lafourche and Terrebonne parishes.

The meeting was divided into a fall program with featured guest speakers and a business session that contained state legislative updates of particular interest to retired teachers.

During the initial program, Tregre shared that the majority of incarcerated individuals do not have a high school diploma. He believes education is key to a stronger and safer community.

“We have to figure this out. Our youth are not ready for employment, and we’ve got to do something,” Tregre said. “I’m looking at this room right now, and I’m thinking, don’t fade away. Don’t give up. We in St. John Parish need you. You guys are an unused force who can really change some lives, even save some lives.”

Guest speaker Dr. Reggie Ross, a 1983 graduate of West St. John High School, shared alarming statistics: 44% of teachers quit in the first five years, a little more than half of teachers say they are satisfied with their jobs, and only 12% say they are very satisfied.

Dr. Ross emphasized the power of teaching and how it impacted his life, from his achievements in the classroom to how hard he was willing to work on the football field. Teachers set higher standards for him than he set for himself, and in the process, he learned to never let himself fall short of anyone’s expectations. That drive has carried on throughout his career.

“Growing up in Edgard, I was truly, truly raised by the village. There were people who picked me up and took me where I needed to go and looked after me,” Dr. Ross said.

During the business session, LRTA President William “Billy” Picard and Executive Director Rodney Watson discussed the recent passing of Senate Bill 6, which provided a 2% cost of living adjustment to former educators age 60 and older who have been retired for at least one year. Also passed in 2022 was House Bill 1021/Senate Bill 434, which made changes to the 2010 and 2020 return-to-work laws.

This year, the Louisiana Retired Teachers Association has seen a call for a full repeal of the Government Pension Offset and Windfall Elimination Provision, which would penalize retired teachers by reducing or eliminating spousal or individual Social Security benefits.

Those interested in joining the St. John Retired Teachers Association at a cost of $10 per year can contact Vice President Shelton Smith at 225-331-1405.

Photos of the fall meeting are available here.