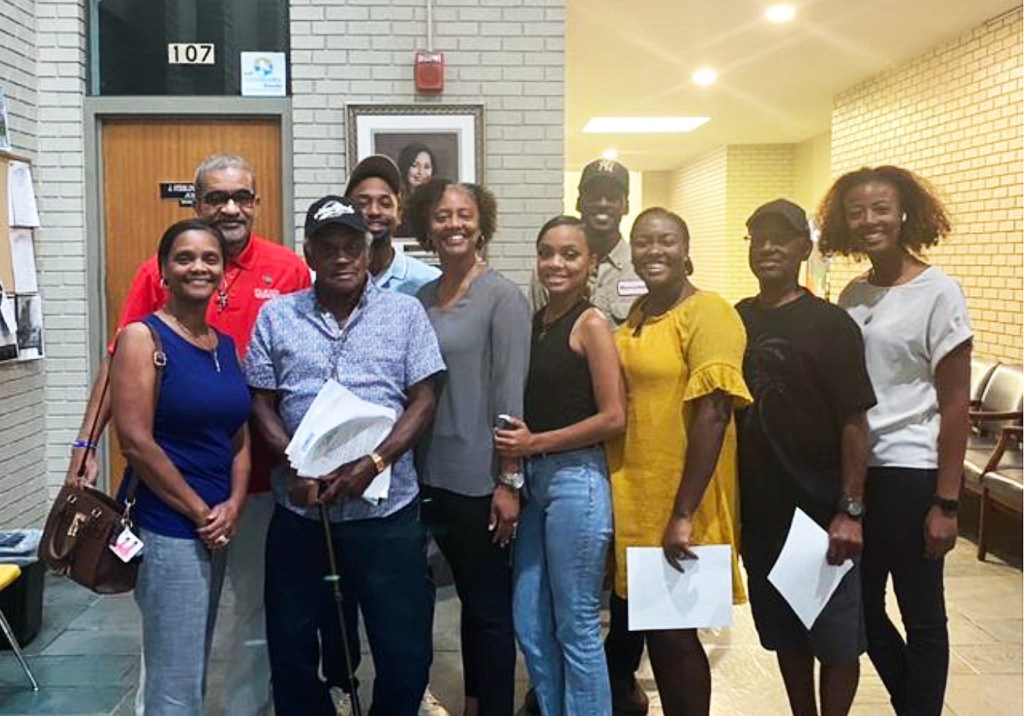 WALLACE — When Prescott “Dool” Bailey arrived at the September 13 Parish Council meeting in Edgard, the last thing he expected to see his family waiting for him with a surprise that was decades in the making.

The Parish Council unanimously passed Ordinance #22-33, allowing the private street “Dool Drive” in Wallace to be added into the St. John the Baptist Parish address system. The naming would not have been possible without the diligence of family members who yearned to bring Bailey’s longtime dream to fruition.

Bailey’s granddaughter, Rilynn Bazile, remembers having conversations with him about naming the street back when she was in high school, more than 15 years ago. According to Bazile, it was important to her grandfather to have the property bear his own name because he worked so hard to purchase the land that his children and grandchildren have called home for more than 30 years.

There are currently three houses on the street. One is the home Bazile grew up in, and the house at the front of the street is where her mother lives currently. The third is a house her uncle built a few years back.

While most streets on the West Bank are ordered numerically rather than privately named, seeing street signs go up for Jessie Lane and Roy Drive made Bailey even more eager to see “Dool Drive” added to the parish address system.

“Out of everything I’ve ever done, I knew having this street named was the most important thing to me to do for him, being that he is 80 now,” Bazile said. “Previously, it was mentioned, but he never really followed through and stayed on top of it. Now we were able to get it done with the efforts of our family members not allowing him to stand alone in the process and using the resources that we have to help him follow through.”

The first step was reaching out the District One Councilman Kurt Becnel to find out what the process would look like. While options existed to add an honorary street sign, the family’s priority was making sure the street name would be recognized in the St. John Parish address system, recognizable by the post office and 911 emergency telephone system, and identifiable by GPS navigation.

“Whatever that process looked like, we wanted to get it done the right way,” Bazile said.

Becnel connected Bailey’s family with the Public Works Department, and the item was later placed on the Parish Council agenda for approval.

Becnel has held great respect for Prescott Bailey for as long as he can remember. As a child, Becnel formed a lifelong bond with Bailey’s son, Byron, and even became the godfather of Byron’s eldest daughter, Anya.

“I’m deeply connected to that family. It’s very special to me, and I’m just so happy that I was able to help them accomplish what they wanted,” Becnel said.

Becnel and the rest of the Parish Council enjoyed seeing the love and support from Bailey’s family when the ordinance was approved on September 13.

“It was exciting for us because we usually just introduce an ordinance and move on, but the outpouring of support of his family was so nice to see,” Becnel said. “Usually when people want to do a street sign, it’s just a street sign, but this family is so tight-knit, and I love that. They love their father and their grandfather, and I do, too.”

Bailey had attended Parish Council meetings before, so it wasn’t too unusual when his grandchildren asked if he would be attending the September 13 meeting.

“We didn’t let our grandfather know what was going on until we got there and he saw it on the agenda. He knew for sure that me and my cousin Dontrell were going to be there, but he was not aware that his kids and other grandkids were going to be there also. I think that’s what surprised him the most,” Bazile said.

Now that the ordinance is approved, Bailey’s family plans to install the new street sign in a small ribbon cutting ceremony on Dool Drive scheduled for this Saturday, October 1.