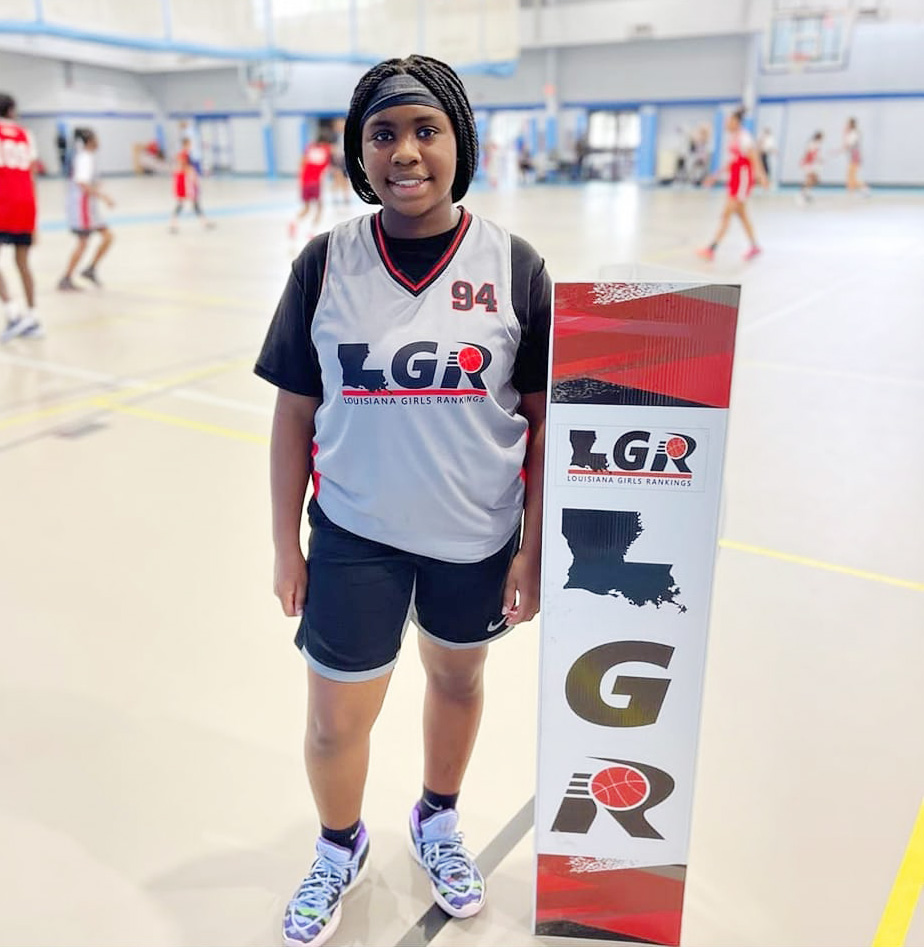 Sa’Naijah Nelson of Montz was a standout in Louisiana Girls Ranking’s Fab 50.

MONTZ — Sa’Naijah Nelson dreams of becoming the first basketball player to cross over from the WNBA to the NBA. Standing at only 5’2”, she is an up-and-coming basketball star who excels as a point guard, shooting guard and forward at Harry Hurst Middle School and beyond.

Sa’Naijah was recently featured in Louisiana Girls Ranking’s Pre-Fab 50, where she earned a golden ticket to compete with top middle school basketball players from around the state in the LGR Fab 50.

The Fab 50 was held on September 17 in Plaquemines Parish and proved to be an unforgettable experience for Sa’Naijah and the other talented young ladies on the court.

Her mother, Bradlynn Green, said Sa’Naijah’s talent in basketball was learned rather than inherited.

“I’m not athletic, and I’ve never seen her dad do much with sports, but Coach Jenkins saw something in Sa’Naijah and pulled it out of her,” Green said. “I always say a child who was taught basketball has way more love for the game because they are always hungry to learn more. Sa’Naijah is a great leader, a great captain and a great ball player, and I’m very, very proud of her.”

Sa’Naijah played basketball on a co-ed team with boys and girls for several years before being picked up by the New Orleans Lady Raiders. She continued her journey in recreation and even had one coach make a new team to showcase her talent after finding out her birthday was two weeks past the rec department’s September 30 cut-off.

Sa’Naijah has dribbled the basketball throughout the Southeast on an AAU travel ball team, but she’s also sharpened her talent close to home. She dominated the court during her first year at Harry Hurst, when she was one of only two six graders to play on both the JV and varsity teams. During her seventh grade year, she was part of a stellar team that had only one loss to R.K. Smith.

However, it was through a Louisiana United AAU travel basketball team that Sa’Naijah’s family learned about Louisiana Girls Ranking.

“This is where the young ladies get recognized. They were at almost every game we played in Louisiana,” Green said. “What they are doing for girls basketball is awesome, and it needs to be highlighted more. They are bringing the best of the best under one roof, and it shows. They are featuring basketball players from all across Louisiana to drive recruiters and scouts to their page. I’m glad that Sa’Naijah was able to stand out and show that St. Charles Parish has some talent, too.”

The Pre-Fab 50 took place on August 21 at Pelican Park in Mandeville. After group stretching, Sa’Naijah jumped into a three-on-three drill and a one-on-one drill where she was able to show her talent as a point guard. Among the attendees were trainers and coaches from colleges in the New Orleans region.

LGR spotlighted Sa’Naijah on social media outlets as a “tough guard who has good handles and excels on drives.” She was cited as a “major factor for her team” and received a special invitation to the Fab 50.

During the Fab 50, held this month in Belle Chasse, Sa’Naijah met the best of the best basketball players from middle schools in New Iberia, Ouachita, Alexandria, Monroe and other areas across the state. She formed a special connection with No. 26, a girl from New Iberia named Zoey. Coaches and trainers through Sa’Naijah and Zoey had played together before once they saw the girls’ chemistry on the court.

Under her jersey, Sa’Naijah wore a special shirt dedicated to Jermani Thompson of Reserve, a high school and college basketball standout who tragically passed away last month while working at New Orleans International Airport. As she calculated her next move on the court, Sa’Naijah reached under her jersey to rub the shirt for good luck.

During the Fab 50, Sa’Naijah was compared to Tameka Johnson twice for her ability to read the court and analyze the opponent’s defensive tactics at a moment’s notice.

“It was an amazing experience and such a positive atmosphere,” Green said.