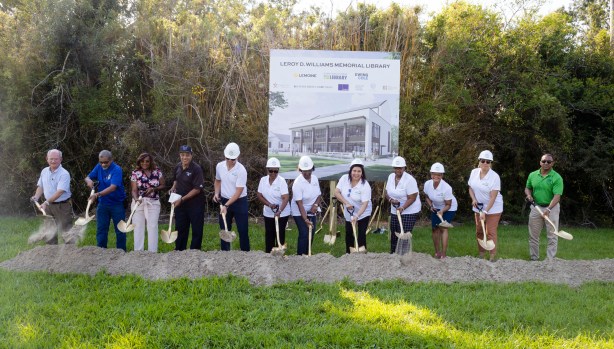 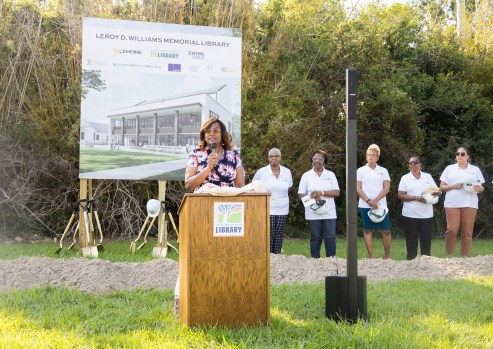 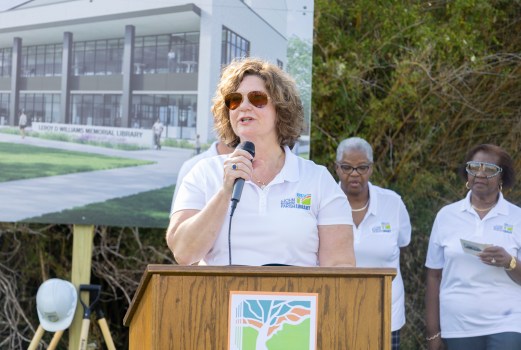 Library Director Andrea Tullos talks about the impact of libraries on society.

RESERVE — The St. John the Baptist Parish Library Board of Control and staff recently celebrated the groundbreaking of the new Leroy D. Williams Memorial Library at 1480 Highway 44 in Reserve.
Located adjacent to the historic St. John Theatre, the new library will function as not only an innovative center of learning, but also a state-of-the-art community center and a cultural hub in the revitalization of Reserve.

Construction is estimated to last 15 to 16 months, with an estimated completion date in late 2023 or early 2024.

Community engagement sessions held in 2021 greatly influenced plans for features and services to be incorporated into the new building.

According to Lisa Tregre Wilder, president of the Library Board of Control, the new Leroy D. Williams Memorial Library will include a makerspace, a podcasting room, a library-run café, and gathering spaces for tutoring, small meetings and large events. The library will feature multiple computers and technology stations as well as a vibrant, interactive youth space. The campus linking the St. John Theatre and the library will provide outdoor space for additional collaboration and community involvement.

“You will see many new features and services available at this facility that will support creativity, enrich lives and expand educational opportunities for all ages,” Wilder said. “Libraries are evolving in the 21st Century, and we are evolving here in St. John the Baptist Parish. Our new Library will be part of the fabric that makes the community, and we will also be part of a great revitalization of Reserve. It will embrace an opportunity to learn and grow now and for all future generations.”

Library Director Andrea Tullos said the budget for the project still sits at $12.5 million, funded fully through library savings. Tullos believes that, as gateways to knowledge and culture, libraries play a fundamental role in society.

“The resources and services that they offer create opportunities for learning, support education and literacy and help shape the new ideas and perspectives essential to a creative and innovative society,” she said.

In its new location, the Leroy D. Williams Memorial Library will continue to honor the legacy of a long-time member of St. John Parish Library Board of Control.

Leroy D. Williams was known to many as a local educator who became principal at East St. John High School prior to his retirement from the school system. He was also a community trailblazer and a founding member of the auxiliary board that determined whether St. John Parish could sustain a public library. He served on the St. John Parish Library Board of Control for 50 years, until his health forced him to resign, and he was instrumental in laying the foundation for the system that exists today.

In 2015, by unanimous vote, the Library Board of Control and the St. John the Baptist Parish Council decided to memorialize his efforts by having the Reserve Branch bear his name.

Williams had one son, who now resides in Oak Ridge, Tennessee. While he is no longer a member of St. John Parish or the state of Louisiana, Jerrold Williams stays informed of the decisions made in reference to the library that bears his father’s name.

He is thankful to the Library team and the St. John Parish Council, especially Kurt Becnel and Lennix Madere, for supporting his father’s legacy.

Jerrold Williams’ cousin, District Three Councilwoman Tammy Houston, was present on behalf of the family during Wednesday’s groundbreaking ceremony. She recounted how passionate Williams was about the library system and how meticulous he was when spending public money. It was because of his diligence that the library system was in a financial position to afford a new building.