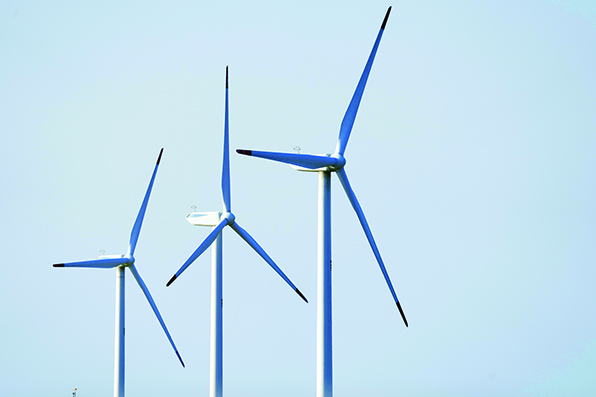 JEFFERSON, La. – Entergy Louisiana, Entergy New Orleans and Diamond Offshore Wind, a subsidiary of Diamond Generating Corporation, today announced the signing of a memorandum of understanding regarding the evaluation and potential early development of wind power generation in the Gulf of Mexico. The agreement could put Entergy in a position to deliver another source of clean power to customers while also strengthening the region’s economic development.

“This is an important first step to possibly bring wind power to our Louisiana shores,” said Phillip May, Entergy Louisiana president and CEO. “While there remains work to be done before that happens, we are excited by the opportunity to begin this process. We aspire to help our communities thrive for generations to come, and this marks yet another milestone in honoring that mission.”

“Clean and affordable power is a driver of economic growth, resulting in increased investments and good paying, green jobs in our communities,” added Deanna Rodriguez, Entergy New Orleans president and CEO. “Entergy New Orleans understands the importance of serving customers with clean energy to reduce the impacts of climate change and doing so in a way that keeps service affordable to families and businesses in New Orleans. This agreement creates another possible avenue to meet those demands.”

The MOU provides a legal framework for Entergy and Diamond Offshore Wind to work toward the development of potential offshore wind demonstration projects located in Louisiana state waters and will focus in the near term on the evaluation of grid interconnection to determine the optimal size and locations of future offshore wind development.

Earlier this year, Louisiana Governor John Bel Edwards submitted the Louisiana Climate Action Plan, which offered a series of recommendations that can lead Louisiana to achieve net-zero greenhouse gas emissions by 2050 – a key action from that plan is to achieve five gigawatts of offshore wind generation by 2035. Development of wind energy in the Gulf of Mexico will accelerate the state’s role as a leader in renewable energy development, and drive collaboration between state and federal agencies, utilities, the private sector, and our states colleges and universities. Entergy is proud to be a leader in this exciting future for Louisiana.

“Diamond Offshore Wind is pleased to announce our partnership with Entergy Louisiana and Entergy New Orleans to explore building the first offshore wind project in Louisiana state waters and in the Gulf of Mexico,” said Chris Wissemann, CEO of Diamond Offshore Wind. “Louisiana has a tremendous opportunity to develop an offshore wind industry that services the entire country, and through this project, we hope to accelerate its development, create jobs, provide a renewable source of power to Louisiana customers, and help Louisiana meet its climate goals.”

Entergy Louisiana currently has approximately 280 megawatts of renewable resources, including the Capital Region Solar facility, which began delivering power to the grid in October 2020. Along with nuclear generation, nearly 30% of the company’s portfolio comes from renewable resources. In addition, the LPSC recently approved 475 megawatts of solar power with an additional 2,000 megawatts in the queue.

Entergy New Orleans’ diverse generation portfolio includes the 20-megawatts New Orleans Solar Station and the soon to be completed Iris Solar and St. James Solar projects, which will add an additional 70 megawatts of clean energy. In addition, the company has 5 megawatts of solar installed on commercial and residential roofs. Together with nuclear, these carbon-free resources account for nearly 40% of the company’s generation capacity and will continue to decrease Entergy New Orleans’ carbon emissions, which today are already nearly 40% below the national average.

Entergy Corporation has been an industry leader in voluntary climate action for more than two decades. In 2001, the company was the first U.S. electric utility to commit to voluntarily stabilizing greenhouse gas emissions. That goal has since been accelerated with a commitment to achieving net-zero carbon emissions by 2050.

Building on MC’s success in the global offshore wind market and DGC’s deep experience and outstanding performance as a U.S. independent power producer, Diamond Offshore Wind is uniquely positioned to be a strong, long-term leader in the burgeoning U.S. offshore wind market.

Both Entergy Louisiana and Entergy New Orleans are subsidiaries of Entergy Corporation (NYSE: ETR), a Fortune 500 company headquartered in New Orleans. Entergy Corporation powers life for 3 million customers through its operating companies across Arkansas, Louisiana, Mississippi and Texas. Entergy is creating a cleaner, more resilient energy future for everyone with our diverse power generation portfolio, including increasingly carbon-free energy sources. With roots in the Gulf South region for more than a century, Entergy is a recognized leader in corporate citizenship, delivering more than $100 million in economic benefits to local communities through philanthropy and advocacy efforts annually over the last several years. Our approximately 12,000 employees are dedicated to powering life today and for future generations.