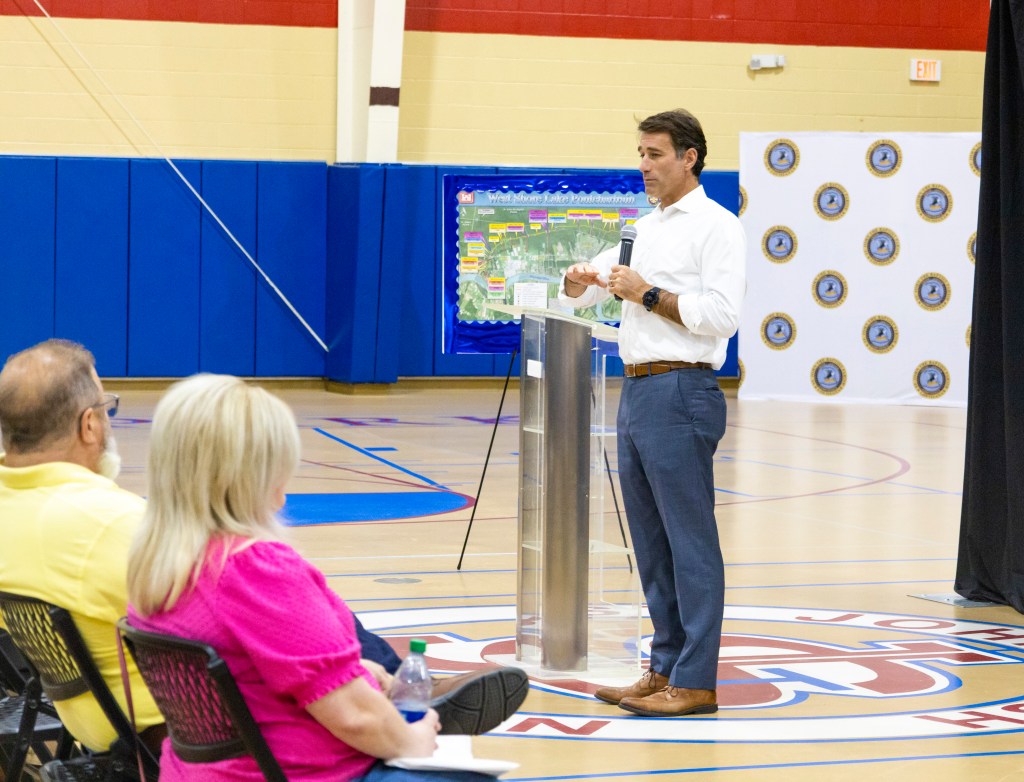 During a visit to St. John the Baptist Parish last week, Graves spoke about the progress of the levee project and answered residents’ questions about Risk Rating 2.0.

According to Graves, residents will not need to wait until the $1.2 billion levee is fully constructed to reap the benefits of the project.

“At this point, according to the U.S. Army Corps of Engineers scheduling, we’re probably looking at a 2026 completion,” Graves said. “Does that mean we are sitting ducks between now and 2026? No, it doesn’t mean that at all. This project is going to be built in lifts or stages.”

The goal for the project next year is to have a 3-foot base in place. The levee is expected to reach a height of six feet in 2024. By the end of 2025, the segments of the levee will stand somewhere between 6.5 and 13 feet tall. The final year of the project, 2026, will include placement of the crown of the levee, which Graves said will feature vegetation for additional resiliency.

The levee is also expected to lower flood insurance rates in St. John the Baptist Parish prior to 2026.

“There is a rule FEMA has that if we get to 50% completion of the project, and if you are able to demonstrate that you have all of the money in the bank to finish the project, they will actually reassess and lower rates as though the project is finished,” Graves said.

Homeowners across Louisiana are already seeing flood insurance rates increase as much as 18% per year under the new Risk Rating 2.0. The new methodology was originally proposed and shot down during both the Obama and Trump administrations. It was then passed at the beginning of the Biden administration in February 2021.

Risk Rating 2.0 has applied to new policies since October 2021. It has been implemented into policy renewals since April 2022.

According to data on FEMA’s website, most policyholders in St. John Parish should see increases of just $0 to $10 in the first year of Risk Rating 2.0.

However, Graves has seen much larger increases, and he said FEMA administrators have been unable to answer all of his questions regarding the new methodology.

“I’ve seen policies go from $560 a year to $8,000 a year,” Graves said. “To this day, they are refusing to be transparent about how they are determining the flood insurance rates.”

During the town hall in Reserve, some residents asked about access to home elevation projects to provide further protection.

Graves said there are a number of programs in place offering home elevation, including FEMA, grants, and FMA, short for flood management assistance. Generally, FEMA will identify areas where there are several homes with repetitive flood losses and offer elevation.

“What we’ve seen so far is that, after that application gets put in, because of the backlog, we may be looking at three years before the dollars are actually available to do the elevation,” Graves said. “Many of these programs require a 25% cost share or match. We are bringing other federal funds to the table, and hopefully some of those can be used as match dollars so you aren’t having to write a $50,000 check.”

Parish President Jaclyn Hotard also reminded residents to take advantage of resources offered through the RESTORE LA program. The first step to receiving assistance is visiting www.restore.la.gov and filling out the brief survey or calling 866-735-2001.

According to Graves, additional projects will be on the horizon to bolster flood control, hurricane protection and coastal restoration in Louisiana.

“Is this the only project we need in this area to be safe? No, I don’t think that it is,” Graves said. “This is probably the anchor or the foundation, but I think other things area needed. We’ve secured $1.2 billion, separate from all the money for this project, for projects that haven’t even been identified yet.”